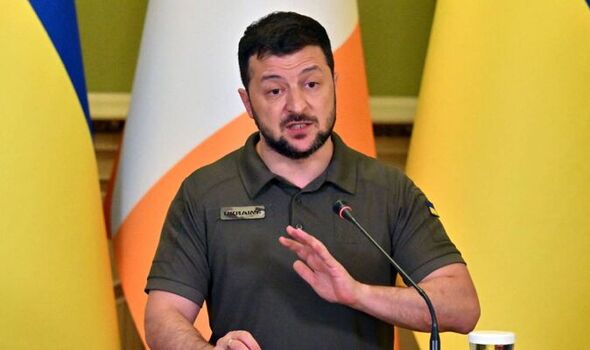 The UK and US led the way in providing state-of-the-art artillery, including multiple rocket launchers.

President Zelensky said the arms were repulsing the invaders: “Finally it is felt that the western artillery…started working very powerfully. Its accuracy is exactly as needed.

“Our defenders inflict very noticeable strikes on depots and other spots that are important for the logistics of the occupiers. This significantly reduces the offensive potential of the Russian army. The losses of the occupiers will only increase.”

Mr Zelensky told Ukrainians in a TV broadcast that Russian military chiefs “should not think that their time on this land is long-lasting”.

But he insisted that Western weapons had made “noticeable strikes” on Russian logistics capabilities.

As the war raged over a 300-mile front in the eastern Donbas region, residents in the besieged city of Slovyansk were urged to flee.

A day after two were killed when Russia blitzed a market, thousands of civilians boarded minibuses

Mayor Vadym Lyakh said “we take people out every day” and “about 23,000 residents remain. Many of the evacuees were taken by bus to the city of Dnipro, further west.”

UK defence intellligence sources said Slovyansk is likely to be the next focus in the fight for the industrial area of Luhansk and Donetsk. Russian forces are also shelling Mykolaiv where Ukraine is blocking an advance on the port of Odesa.

There were also some early signs of a possible lull in the onslaught.

Putin did not make a claimed or assessed territorial gain in Ukraine “for the first time in 133 days”, said US think tank the Institute for the Study of War. Analysts said Moscow may be taking an “operational pause” that did not entail “the complete cessation of active hostilities”.

Shelling in east Ukraine killed at least nine people and wounded six. Seven deaths, including a child, were in Donetsk province as 10 towns were struck.

Donetsk is part of the Donbas, a mostly Russian-speaking industrial area where Ukraine’s most experienced soldiers are concentrated.

Pro-Russian separatists have fought Ukrainian forces and controlled much of the area for eight years.

President Putin ‘recognised’ the independence of two self-proclaimed republics in the region just before Russia invaded Ukraine on February 24.