The incident in Tenerife prompted a full-scale alert, not just once but twice within 48 hours. The 41-year-old man, understood to be Spanish, had only just been released by the courts for screaming at passers-by that he had the coronavirus and would infect them all. He then did exactly the same thing a day later, again spitting at the Civil Guard and local residents.

The police had to call in the special biological and chemical defence team, with full protection gear and masks as a result of the incidents in the town of Buenavista del Norte in the north of Tenerife.

The video shows how the man was pulled from a police car and pinned to the ground whilst medical staff fitted him with a mask. He was then strapped to a stretcher and taken away in an ambulance. 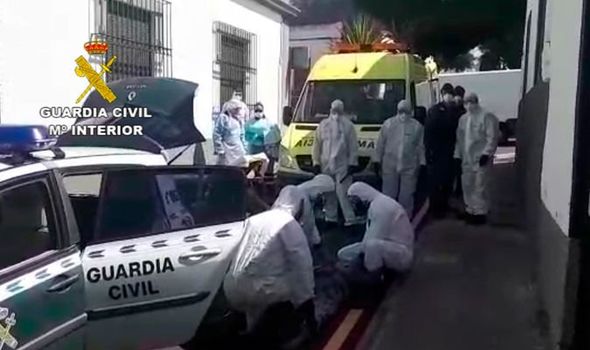 “In both the first and second arrests, this 41-year-old man spat and attacked the civil guards who had to intervene,” said a police spokesman. “The detainee screamed that he had the virus and threatened agents and residents with infecting them. “

After the first arrest, the man underwent a coronavirus test which proved negative.

He has now appeared before the courts for the second time and has been remanded in custody.