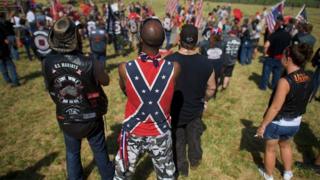 This week, if there had been no pandemic, I would have been on leave, heading for Gettysburg in Pennsylvania – the site of the famous battle in the American Civil War of 1861-65.

For some reason this conflict captured my interest as a child. I’ve always wanted to attend the Gettysburg College Civil War Institute’s annual summer school. Sadly, that has been cancelled this year because of Covid-19.

On frequent trips to the States, I used to buy a historical magazine about the war whose masthead slogan proclaimed: “For those who still hear the sound of the guns.”

This reference to the echoes of the conflict through the ages is, I think, why the war still fascinates me today.

As the Black Lives Matter movement demonstrates, for many Americans there is still unfinished business from the Civil War years.

The benefits of black emancipation were partial and never fully realised. Oppression, disproportionate poverty and racism continue to this day, more than 150 years after the conflict ended.

Other Americans who still hold to the myths about “the old South” take a very different view. And then there are the hardcore right-wing and racist militias, who freely use the symbols of the Confederacy to symbolise their own cause.

Indeed, the Civil War is rarely out of the news, be it for controversy over statues commemorating Confederate leaders or famous generals or, most recently, for the long-standing naming of a small number of US military bases after rebel commanders.

In the wake of George Floyd’s killing and the wave of protests that have followed, the questioning of the visibility of the Confederate’s public heritage has reached a new intensity.

Some long-contested statues are finally being removed and the Pentagon has appeared ready to take a fresh look at the dozen or so establishments named after Confederate generals.

Senior officials, a spokesman said on Monday, were “open to a bipartisan discussion on the topic of removing Confederate names from the bases”.

Think about it for a moment.

Yes, it was a long time ago, but these were officers who rose up against their own government. It is hard to imagine many countries where such figures would be commemorated by the very military that they fought against.

As retired Gen David Petraeus put it in a recent article in The Atlantic: “The irony of training at bases named for those who took up arms against the United States, and for the right to enslave others, is inescapable to anyone paying attention…”

But US President Donald Trump is having none of it, insisting that the names will not be changed.

He argues that you cannot change history and that these bases are an integral element of the US military’s past.

Once again, he appears to be aligning himself with southern defenders of a very specific Confederate past, as he did at a rally at Charlottesville, Virginia, in 2017 – when he failed to condemn explicitly the violence of white supremacists whose activities contributed to the death of a demonstrator.

It is an election year, after all.

Most – if not all – of these bases are in the former states of the Confederacy, like Texas, Alabama, Georgia, North Carolina and Virginia.

As a footnote, Camp Beauregard in Louisiana commemorates the rebel Gen Pierre GT Beauregard. He was the Confederate commander in Charleston who opened fire on Union troops in Fort Sumpter in 1861 – the very shot that opened the Civil War.

Many of these sites date back to camps set up during World War One that were reactivated again for World War Two, eventually becoming permanent establishments. In total, 10 US Army installations were named after senior Confederate commanders.

Established in 1918, the base was named for Gen Braxton Bragg, a slave-plantation owner from North Carolina who defected from the US Army to fight for the Confederate in 1856.

His military record was mixed, including accolades for his US Army service in the Mexican-American War, but many defeats for the Confederacy in the Civil War, which historians attribute to his poor tactics.

The headquarters of the Special Forces, Fort Bragg is among the largest US military bases in terms of population.

Fort Benning, which hosts several training schools for infantry and other US Army units, bears the name of Henry Benning, a Confederate general and Supreme Court judge in his native Georgia.

Gen Benning was a staunch advocate of Confederate secession, arguing that it was the only way to preserve slavery in the southern states.

The name of Robert E Lee, the commander of the Confederate’s Army of Northern Virginia, was given to the base, then called Camp Lee, during World War One.

In southern states, Lee is still revered today as one of the Civil War’s greatest generals for his underdog victories against larger armies. Training units, logistical support and two museums are based at Fort Lee.

Covering 214,968 acres (335 sq miles), Fort Hood is the US Army’s principal base for training and deploying heavy forces – the 1st Cavalry Division among them.

The base was named in honour of John Bell Hood, a Confederate general reputed for his aggressive leadership and recklessness on the battlefield. His reputation was tarnished after leading Confederate armies to several decisive defeats, including his loss at the Battle of Nashville.

Among all American institutions, the US military has been one of the most successful in terms of integration – though inevitably it still reflects many of the problems of the society from which it is drawn.

Some 43% of the 1.3 million men and women on active duty in the US military are from minorities. However, there are only a handful of minority faces among the very top military leadership.

On the whole, military commanders have been hugely sensitive to these issues, well aware of how divisive they can be.

Many have privately been appalled at the casual way in which the president has approached these explosive topics and have made their own positions clear in public statements to the troops under their command.

It’s just one more element in the worsening tensions between the military top brass and the president.

One senior commander has been in the forefront of the effort for change.

Two months ago, in mid-April, Gen David H Berger, the commandant of the US Marine Corps, wrote an open letter to all the men and women under his command, explaining his decision to ban public displays of the battle flag carried by the Confederate Army during the Civil War.

“I am mindful that many people believe that flag to be a symbol of heritage or regional pride,” he wrote. “But I am also mindful of the feelings of pain and rejection of those who inherited the cultural memory and present effects of the scourge of slavery in our country.”

He went on to insist that “we must remove those symbols that have the effect of division and not mere disagreement”.

He asked every Marine to focus on the team and on the symbols that brought the Corps together, namely the eagle, globe and anchor (its badge), and the Stars and Stripes.

While the Civil War saw the first widespread recruitment of black soldiers into the Union Army, it was a highly segregated system. The US military was not properly integrated until much later, after the Second Wold War.

There are some 89 minority recipients of the Medal of Honour, America’s highest military award for valour. Many of them have already been commemorated in one way or another and might lend their names to military installations.

The American Civil War was a struggle over – whatever the protagonists of southern lost-cause theories may tell you – essentially one thing: slavery.

But the defeat of the South did not end racial inequality. It became institutionalised in other ways.

That is why, even today, the Civil War casts such a great shadow over the US.