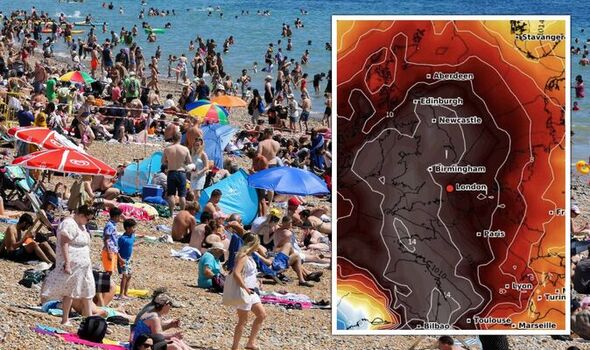 Government officials have issued a raft extreme weather warnings for the weekend as a scorching blast from North Africa pushes the UK to the brink of a ‘national emergency’. Britons are warned to keep watch on vulnerable friends and neighbours as experts warn 40C heat ‘will kill’.

Weather models show little let-up in searing temperatures with the mercury to simmer in the high-20Cs and 30Cs into August.

James Madden, forecaster for Exacta Weather, said: “This looks like a very long spell of hot weather, particularly for the south which could see highs in the mid-20Cs or above for several weeks.

“There may be a break in the heat later in the month, but the heat will return as we go into August.

“This is looking like one of the longest spells of hot weather the UK has experienced in quite a few years.”

The Met Office with the UK Health Security Agency (UKHSA) has issued a level-3 ‘heatwave action’ heat-health alert across southern and parts of central and eastern England. 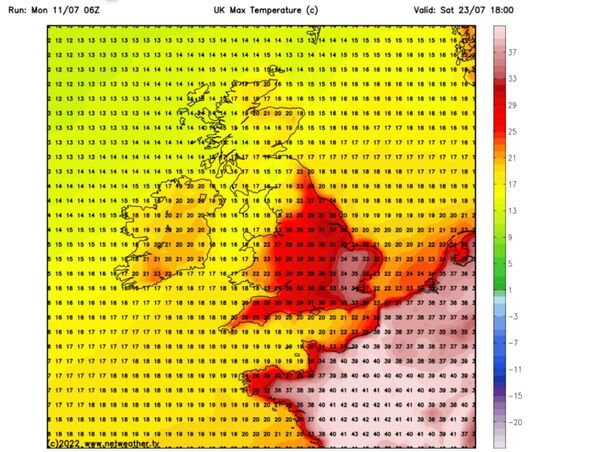 Central and northern Britain is under a level-2 ‘alert and readiness’ warning this week with only the far north expected to dodge the heat.

The alert level is one step below a level-4 ‘national emergency’– launched when ‘illness and death may occur among the fit and healthy’.

A plume of hot air will sweep up from Africa and the Continent from the weekend carried on a low-pressure system swirling to the west of Britain.

This has triggered further government warnings for extreme heat across southern and central Britain.

The current record of 38.7C recorded in Cambridge in 2019 will be under threat according to the Met Office. 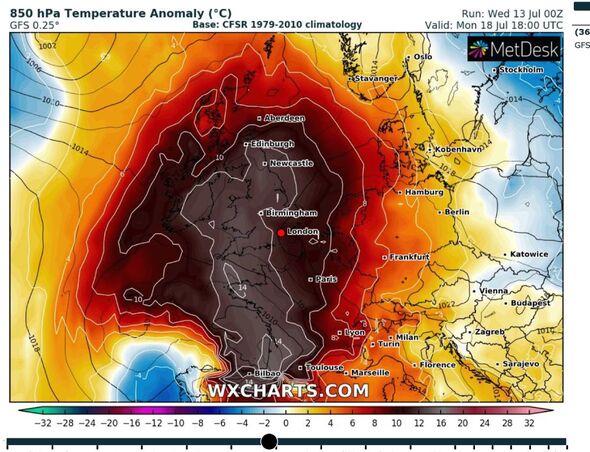 Meteorologist Alex Deakin said: “Low pressure will draw winds up from the south and there is the potential to tap into very warm air spreading up from Spain and Portugal.

“That could lift the temperatures up on Saturday back up to 30C, but on Sunday we could go even further, so the Met Office has issued an extreme heat weather warning for Sunday across much of England and parts of Wales.”

Stifling heat threatens health issues even for people without existing conditions, he said.

Britons should also brace for chaos on the roads, railways and airports through the weekend and into next week, he added.

He said: “There is the potential for the temperatures to get into the mid-30Cs and that could cause some problems, such not just for the elderly and vulnerable but widespread health issues.

“We are also going to see some disruption to transport with airports likely to be affected.

“Temperatures will be in the mid-30Cs and possibly even higher, and we could get close to the record if everything comes together.”

Jim Dale, meteorologist for British Weather Services, said: “There is a chance that the UK temperature record will fall through the next day with very high temperatures on the way.

“People should take extreme care, as there is no doubt that when thermometers start notching up to these levels, the heat can kill.

“Temperature records are more likely to fall at the weekend and during the start of next week when it will turn hotter.

“We could see maximum temperatures in the high 30Cs during this heatwave.”

Extreme heat at the start of next week will be driven by a plume of hot air sweeping into Britain from North Africa.

Netweather forecaster Nick Finnis said: “On Sunday, high pressure just to the east in combination with an upper low to the west of Iberia will pull very hot air, originating from Northwest Africa, north across Spain then France and reaching southern England through the day.”