Home » World News » We just want a grandchild – Indian couple sue son for £530,000 for not having children 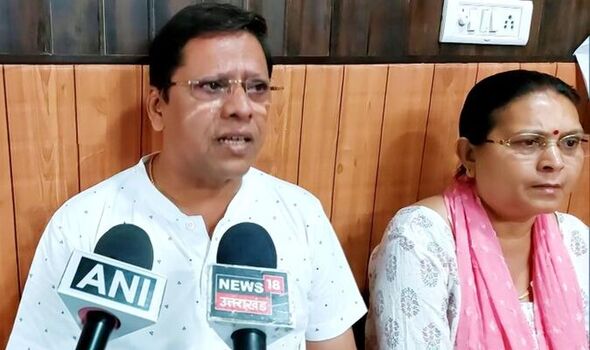 Sanjiv Ranjan Prasad and his wife Sadhana Prasad from the city of Haridwar have applied for a court order seeking compensation of 50 million rupees from their son and daughter-in-law if they don’t have a child within the next 12 months. The demanding grandfather has cited financial difficulties for taking his son to court after the marriage – which took place in 2016.

Allegations by the plaintiffs suggest the daughter-in-law’s family are manipulating and controlling their son’s finances, and have taken steps to prevent the couple from having a child.

According to local customs, women are often forced to bear children within their first few years of marriage.

More traditional families in India have patriarchal setups with expectations of a male heir.

Poorer families prefer sons as they are able to contribute to the family’s welfare through jobs, often manual, and often laborious.

Mr Prasad claimed he had to spend all his money on his son’s education in the US and is presently undergoing a financial crisis.

He said: “I gave my son all my money, got him trained in America.

“I don’t have any money now.

“We have taken a loan from the bank to build a house.

Mr Prasad says he spent around £258,000 raising son, much of which was spent on his education abroad.

The angry grandfather also claims to have bought the newlyweds an expensive car and paid for their honeymoon to Thailand.

Mr Prasad claims his son, who is now a commercial pilot for an airline, moved to Hyderabad after marriage and has since ceased communication with his parents.

When Mr Prasad questioned his son over the potential of a grandchild, he claimed the son stated they had “separated” in a bid to ease the pressure from his father.

AK Srivastava, the advocate representing Mr Prasad and his wife, argued that the elderly couple is seeking compensation for financial and emotional loss.
“The couple has the freedom to not give birth to a child, which is why we are asking to be compensated.”

Speaking to The Independent, Mr Srivastava added: “The amount is just given the money Mr Prasad has spent on his son’s upbringing.

“Such new cases are important as they lead to the formation of new laws.”

The case is expected to be heard in court on May 17.

Can parents force their children to provide them with grandchildren? Let us know your thoughts by CLICKING HERE and joining the debate in our comments section below – Every Voice Matters!

The birth rate in India is slowly declining as the financial burden and high population rates play a part in the world’s second-largest population.

In 1960, Indian couples were averaging nearly 6 children per family, this has steadily declined to 2.2 children in 2019.

India’s birth rate per 1,000 people currently stands at around 17.4 births.