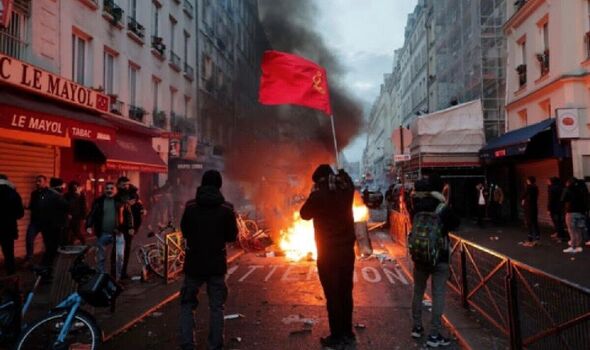 Hundreds of Kurdish locals have flooded the streets around a cultural centre in Paris where three people were killed and three wounded in what the Government said appeared to be a racially motivated attack. The group of protesters were reportedly throwing rocks and fighting with police, who responded by using teargas. Eleven officers have been wounded in the exchange, the police said. The incident comes after a spokesperson for the cultural centre, Agit Polat, accused French authorities of “once more failing to protect us” against a “terrorist attack”.

Protesters could be seen fighting with riot police as the forces attempt to push back members of the Kurdish community.

Hundreds of the locals waved Kurdish flags as they looked to pay respects to the three people killed earlier on Friday.

Angry residents took to the streets as police in riot gear cordoned off the area around Rue d’Enghien, near the centre of Paris, where the attacker had been arrested earlier.

Police could be seen hitting protesters with riot shields as the fighting broke out.

Fires spread through parts of the city where the attack had taken place as the protesters set alight bits of wooden crates and rubbish. Plumes of tear gas could also be seen sifting through the streets.

One photo appears to show a protester throwing an elongated bench in the direction of the police.

Anne Hidalgo, the mayor of the French capital, said: “The Kurdish community and, through it, all Parisians, was targeted by these assassinations committed by an extreme right-wing activist.

“Kurds wherever they reside must be able to live in peace and security. More than ever, Paris is by their side in these dark times.”