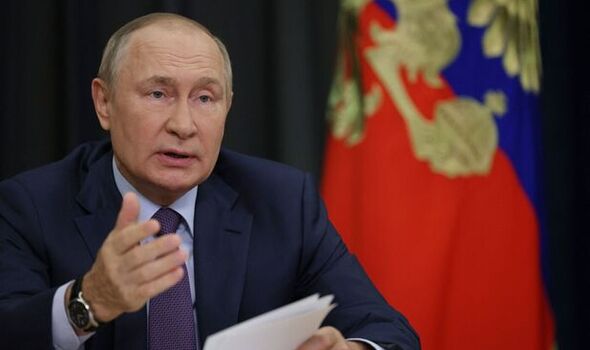 Former Russian president Dmitry Medvedev said “demagogues across the ocean” are “not going to die” by intervening in Russia’s invasion of Ukraine.

The US national security adviser, Jake Sullivan said the US and allies will act “decisively” if Russia uses a tactical nuclear weapon in Ukraine.

But Medvedev, who now serves as deputy chairman of the country’s Security Council, said Russia had the right to defend itself with nuclear weapons if it is pushed beyond its limits and that this is “certainly not a bluff”.

He said: “Let’s imagine that Russia is forced to use the most fearsome weapon against the Ukrainian regime which had committed a large-scale act of aggression that is dangerous for the very existence of our state,” he wrote in a post on the Telegram messaging app.

“I believe that Nato would not directly interfere in the conflict even in this scenario,” Mr Medvedev said. “The demagogues across the ocean and in Europe are not going to die in a nuclear apocalypse.”

Some of Vladimir Putin’s allies have claimed the tyrant would use nuclear weapons if Ukraine makes a concerted effort to reclaim four territories set to be annexed.

Ukraine has urged the European Union to impose economic sanctions on Russia to punish it for staging annexation votes in four occupied regions.

Putin has claimed Russia wants to “save people” in the four territories it holds in Ukraine.

In incendiary comments, the tyrant said: “Saving people in the territories where this referendum is taking place… is the focus of the attention of our entire society and of the entire country.”

The Kremlin has drafted 300,000 reservists to fight in Ukraine.

Nearly 2,400 people have been arrested since protests broke out against Vladimir Putin’s military draft, according to the UN.

But Andriy Yermak, the head of Ukraine’s presidential administration, said that mobilised Russian conscripts should “surrender” to save their lives.

“The mobilized Russians who will surrender will save their lives. As to the rest, their odds will betray them,” he said.

Ravina Shamdasan, spokeswoman of the United Nations rights office said: “We are deeply disturbed by the large number of people who have reportedly been arrested,”

Russian authorities have cracked down on criticism of the war in Ukraine, arresting thousands of protesters since the beginning of the conflict in February.