China’s ambassador to the UK says Britain’s decision to block Huawei from its 5G network is “disappointing” – but Donald Trump has welcomed the move.

Yesterday, Boris Johnson also banned the purchase of any new 5G equipment from the Chinese tech giant from the end of this year.

Condemning the ban, Liu Xiaoming tweeted: “Disappointing and wrong decision by the UK on #Huawei. It has become questionable whether the UK can provide an open, fair and non-discriminatory business environment for companies from other countries.” But the US president praised the UK’s decision, saying: “We convinced many countries, many countries – and I did this myself for the most part – not to use Huawei, because we think it’s an unsafe security risk.”

“It’s a big security risk and I talked many countries out of using it. If they want to do business with us, they can’t use it.”

The US is continuing to increase pressure on China, with Mr Trump signing an executive order that ends the special status of Hong Kong, citing the “oppressive actions” of Beijing.

Mr Trump said that the order would mean “no special privileges, no special economic treatment and no export of sensitive technologies” for Hong Kong.

“Hong Kong will now be treated the same as mainland China,” he said.

The president also signed a sanctions bill, approved by the US Congress, which could penalise banks doing business with Chinese officials implementing the controversial new security law in Hong Kong. Supporters of the law say it is necessary to bring stability to Hong Kong but critics worry it is being used to crush Hong Kong’s traditional freedoms.

This week Hong Kong’s chief executive Carrie Lam said that primary elections held by pro-democratic parties last weekend, in which 600,000 people are estimated to have voted, could violate the new national security law.

According to state media, the Chinese government said it strongly opposed the latest US actions and would apply its own sanctions to US individuals and entities in response.

US-China relations have sunk to new lows but this week there has been a flurry of formal measures announced by both sides. 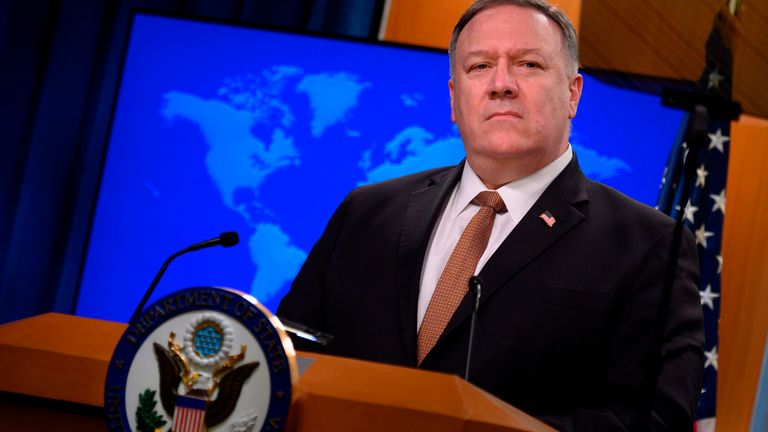 On Monday, US Secretary of State Mike Pompeo declared in an official statement that China’s claims to the South China Sea were “completely unlawful”.

The Chinese Ministry of Foreign Affairs said the US was “a troublemaker” and also announced sanctions on US defence contractor Lockheed Martin, which is helping to upgrade Taiwan’s Patriot surface-to-air missile system.

It had earlier announced sanctions on US officials, including senators Marco Rubio and Ted Cruz, in response to previous sanctions applied by the US to senior Chinese officials because of China’s treatment of minorities in Xinjiang.

Sanctions are flying back and forth across the Pacific but they will certainly hurt China more than the US.

Marco Rubio and Ted Cruz were unlikely to be planning a summer holiday to Xinjiang but many wealthy Chinese have substantial assets in the US and routinely send their children there to be educated: Chinese President Xi Jinping’s daughter studied at Harvard.

And Mr Trump’s comments on the UK’s ban of Huawei show how all-encompassing the US approach is. Yesterday a Huawei spokesperson said that the British decision was “about US trade policy and not security”.

Mr Trump added some substance to that, saying: “If [countries] want to do business with us, they can’t use it”.