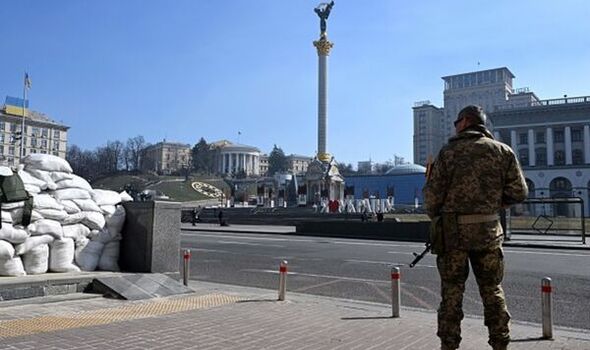 The Ukrainian resistance has stopped Vladimir Putin seizing Kyiv and toppling President Volodymyr Zelensky – holding out longer than strategists believed possible. US defence sources said Ukrainian forces are launching counter-attacks, with an official declaring that Kyiv is “now able and willing to take back territory”.

And a western official said yesterday: “We are speaking to the Ukrainians constantly about their requirements for weapons.”

“They are obviously expending a lot of ordnance and this is more than we anticipated because we expected that, by this stage, we might be supporting an insurgency on a more limited scale.

“We are trying to step up the flow of weapons that they need to meet that new requirement and there are shortages.”

“But I have seen no evidence that they are running out or that we will let them.”

Pentagon spokesman John Kirby said: “They are going after Russians and pushing them out of places where the Russians have been in the past.”

“We have seen this now increase over the last few days.”

“They are slowed. And some of that is due to their own ineptitude.”

Western officials also believe it is “less and less likely” Putin will be able to achieve his original military goals.

Another source added: “This is not going according to plan for the Russians.”

Russia is suffering military losses in Ukraine not seen since the Second World War, with 10,000 troops killed since the invasion began, western officials have said.

The number of Russian soldiers wounded and incapacitated is thought to be three to four times higher.

The Ukrainian military claimed yesterday that Russian forces have stockpiles of ammunition and food that will last for “no more than three days”.

A Ukraine military spokesman said: “Having lost its offensive potential, the Russian occupation forces continue to form and move reserves from the depths of the Russian federation to the borders of Ukraine.”

Starstreak can be carried by a soldier and is the world’s fastest surface-to-air missile, hitting its target at Mach 3 – three times the speed of sound.

Russian military chiefs had ordered the use of hypersonic missiles and other special weapons, the source claimed.

But these are not expected to materially sway the course of the conflict, it was said.

Mr Biden said he believes Putin has his “back against the wall”.

Asked how the conflict may end, a Western official added: “There is a scenario where the Russians are able to grind down Ukrainian resistance.

“That scenario is becoming less and less likely.

“I think it is quite possible that we remain in this phase of the conflict for some time, where the Russians continue to grind forward slowly.

“But where the Russians are unable to achieve their objectives.”