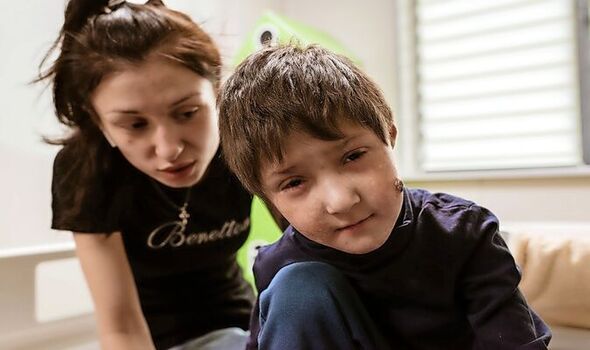 His father and his cousin were killed when their car was hit by gunfire two days after the invasion. The family’s Lada was caught when Russian reconnaissance forces tried to push into Kyiv.

The computer-mad teenager is scarred both physically and mentally, and will need more surgery.

His mum Natalia, sitting next to him in hospital, said: “He can’t walk yet, but the doctors told him that he’d be able to step on his feet later.

Atrocities “We didn’t realise who was shooting. As soon as everything ends, we will find out. They will be punished.”

Before the war, he loved the things that teenagers anywhere in the world might do like playing on his phone and taking their dog for a walk, she said.

Ukraine’s largest children’s hospital is feeling the trauma of the war.

Among those being treated at Okhmatdyt hospital is a mother injured in an artillery assault as she protected her one-month-old baby from shrapnel. Olga, 27, shielded daughter

Victoria as a shell hit their apartment building and damaged a nearby kindergarten in Kyiv. Doctors treating the family removed several pieces of shrapnel from the mum’s body.

Meanwhile, five-year-old Aldar has rare Rothmund-Thomson syndrome, which affects the skin and skeleton.

Aldar and her mother Maria Mass escaped from Hostomel, north-west of Kyiv, in the face of firing by Russians. It took them 12 hours to make the 15-mile journey.

They came to the Kyiv region in 2014 to escape the war in Donetsk.

And nine-year-old Yura lost the ends of two fingers while using an axe to chop up wood to keep his family warm.

Paediatrician Svitlana Onysko described the situation as “really terrible, it is challenging, it is awful”.

She added: “We live in the hospital, we don’t go home; we are available 24/7, at any time…to help the kids, and it’s really terrible and difficult.

“It is difficult psychologically and morally because these are children.”

Half of the 3.3 million Ukrainians who have fled since the start of the war are children.

As Ukraine has a high number of orphans, fears have been raised that they could be abducted. There have been some reports of trafficking.

Ylva Johansson, the European Union’s migration commissioner, said: “There is a huge risk of vulnerable children being trafficked.”