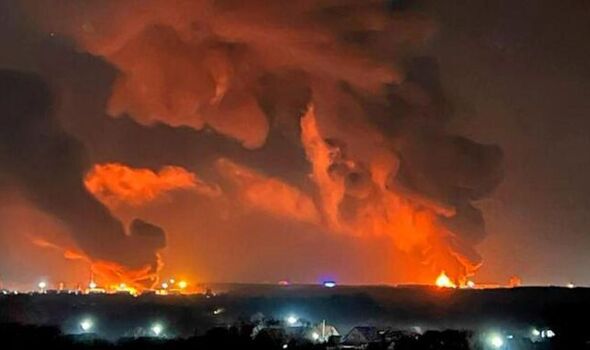 Explosions rocked the two fuel storage facilities – one at a military base – in the city of Bryansk.

The missile strikes – which have not been officially confirmed or denied by Kyiv – blew up the Transneft-Druzhba Oil Depot in Bryansk, 70 miles from Ukraine’s border.

The plant was pictured ablaze at 2am local time before a second fire broke out at a nearby military facility 15 minutes later, Russian state media said.

Video footage appears to capture the sound of an incoming missile before a large explosion and fireball.

Bryansk is a logistical hub for Russian forces battling Ukraine, while the Druzhba pipeline is one of the main routes for Russian oil to reach Europe.

The destruction of the oil facilities is likely to have infuriated Russian President Vladimir Putin, who at the weekend was seen biting his lip and looking unsteady on his feet at an Easter religious event.

His army has already suffered a number of embarrassing losses – most notably the flagship Moskva cruiser in the Black Sea, which was sunk by Ukrainian missiles.

Putin yesterday accused Ukrainians, with the backing of America, of a plan to assassinate a prominent Russian television propagandist. Putin claimed the plot had been foiled.

The claims came as British intelligence said Russia had “yet to achieve a significant breakthrough” of defensive lines in Donbas despite Ukraine imposing a “significant cost” on Putin’s forces.

Defence Secretary Ben Wallace also said yesterday that approximately 15,000 Russian personnel have been killed so far in the conflict.

He added: “Alongside the death toll are the equipment losses, and in total a number of sources suggest that to date over 2,000 armoured vehicles have been destroyed or captured.”

“The offensive that was supposed to take a maximum of a week has now taken weeks.”

He reiterated that Russia has so far “failed in nearly every one of its objectives”. And he confirmed that Britain would be sending to Ukraine vehicles fitted with launchers for anti-air missiles.

He said the Stormer armoured vehicles will give Ukrainian forces “enhanced, short-range anti-air capabilities both day and night”.

He told MPs: “As we can see from Ukrainians’ requests, more still needs to be done.

“So, for that reason, I can now announce to the House that we shall be gifting a small number of armoured vehicles fitted with launchers for those anti-air missiles.”

Meanwhile, Ukrainian defenders holed up in the Azovstal steelworks in the southern city of Mariupol – which is still under siege – were pinning down “many Russian units” and preventing them from redeploying to the Donbas front, while also exhausting Putin’s troops and reducing their combat effectiveness, the Ministry of Defence added. Russia yesterday temporarily suspended the assault in Mariupol to allow civilians to leave. It came as officials said a new mass grave had been identified north of the city.

Mayor Vadym Boychenko said authorities are trying to estimate the number of victims after satellite photos released over the past several days have shown what appear to be images of other mass graves.

Yesterday the Kremlin launched deadly missile attacks on five train stations in the centre and west of Ukraine. The Russian defence ministry claimed it had destroyed six facilities powering the railways that have been used to supply Ukrainian forces with weapons from abroad.

There were reports of five dead, although rescue workers said the numbers of casualties were as yet unclear. Vitalii Koval, head of the Rivne regional military administration in Ukraine, said to residents: “The enemy launched two missile strikes on the railway infrastructure. We strongly recommend that you be in shelters during air alerts.”

However, there were said to be were no casualties at Krasnoye railway station.

Military strategists said the attacks were a clear warning – not only to Ukraine but also to the US. They were launched just hours after America’s secretary of state Antony Blinken and defence secretary Lloyd Austin left Kyiv by train back to Poland.

The railway lines are integral to Ukraine’s war effort, moving troops and military hardware in and out of Poland, which is Nato’s logistics hub. The attacks are also a terrifying development for the thousands of refugees trying to flee the country by train.

Many have already been put off after a Russian missile attack on a station in Kramatorsk left more than 50 refugees dead earlier this month.