Britain basked in temperatures of 24C in southern regions including London today following a week of drizzle. But the hot air caused heavy thundery rain to move northwest over the North Sea from Belgium and Holland on Saturday, before continuing to spread northwest across the far north of England and southern Scotland through the morning. Lightning maps from Blitzortung show the regions affected by the thunderstorms tonight include just outside Wales, such as Liverpool and Chester.

Nick Finnis at Net Weather said: “Through this evening, localised heavy showers and a few thunderstorms continuing for a time across the west and north before clearing away northwestwards.

“Further heavy showers and perhaps some thunderstorms developing across southern England before clearing northwest across the Midlands and Wales overnight.

“Drier conditions with clear spells following from the southeast across many parts in the early hours. Though mist, low cloud and drizzle will affect eastern Scotland and North East England.”

He added the UK will also be blasted by thunderstorms today. 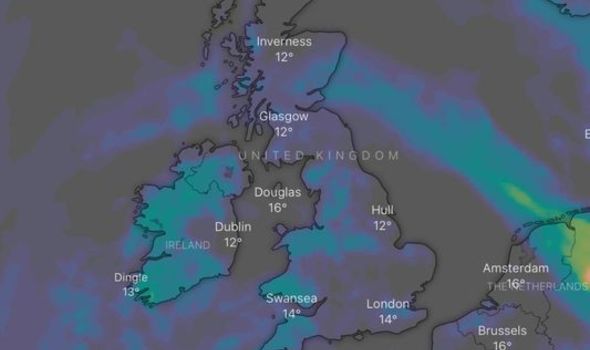 Mr Finnis said: “Sunday will see grey skies from low cloud across eastern Scotland and North East England, with mist over hills and coasts and some patchy rain or drizzle too.

“Elsewhere, warm sunshine for many, but like today, some scattered slow-moving heavy showers and thunderstorms developing, mostly across SW England, Wales, Midlands and northern England.

“Many places will miss them in these areas and stay dry though.

“Afternoon highs widely reaching 21-24C, cooler along the cloudier coasts in the northeast, where temperatures will be pegged back in the mid-teens.” 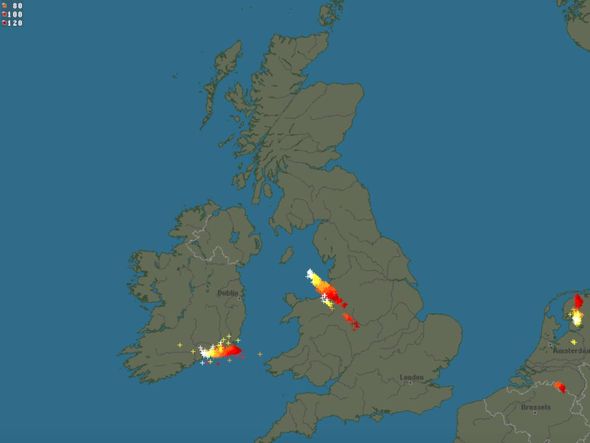 The Met Office also warned of thunder tonight in its latest forecast on its website.

It said: “Showers mostly dying out this evening but some showery rain, locally heavy with thunder, moving north across parts of England and Wales.

“Sunday: Low cloud and fog in the northeast becoming confined to coasts, then many parts seeing warm sunshine. 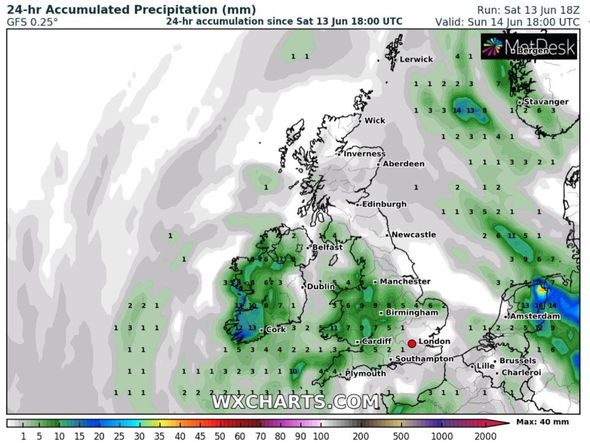 “Showers developing, mostly in the west where some will be heavy and thundery.

The Met Office said: “Rather warm with sunny spells and light winds, punctuated by scattered, occasionally heavy showers and thunderstorms developing each day.

“Generally much cloudier and colder in the northeast (except Shetland) throughout.” 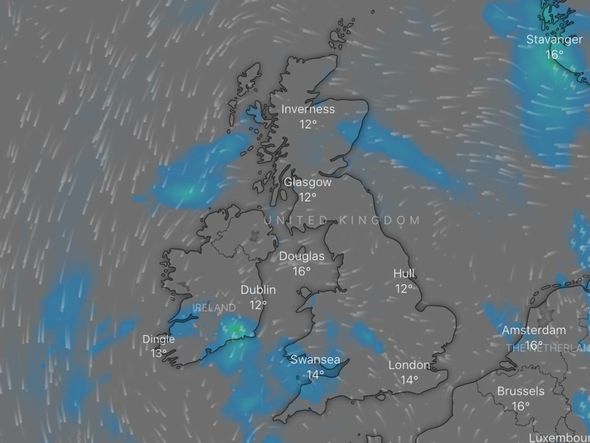 He said: “Area of low pressure will still be close to the southwest on Monday, but will tend to weaken, so winds will be light generally, with another day of warm sunny spells for many, but some scattered slow-moving heavy showers and some thunderstorms developing, mostly across the west.

“Shallow low pressure hanging around across the south for much of the rest of the week, so much of the UK will see a mixture of warm sunny spells.