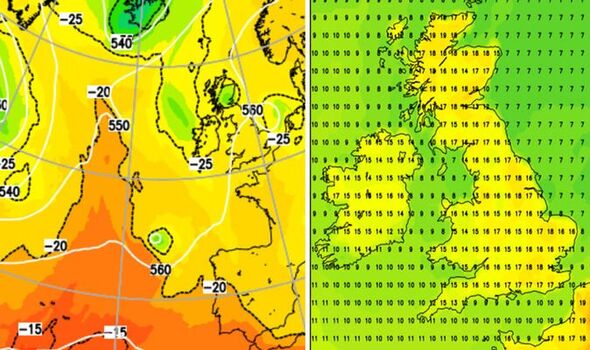 Britons will be getting into the summer mood this weekend with lashings of golden rays and blue skies on the way. The mercury is expected to hit 70F before the end of the month, well above average for the time of year. If the 21C (70F) mark is breached on Monday, the astronomical start of spring, it will be the warmest season kick-off since temperatures hit 21.1C (70F), in Cambridge, on March 21, 1938.

Eastern coasts may feel a brisk easterly chill while much of the country warms up through the last week and a half of March.

Parts of the country may see a last flurry of sleet before the balmy weather kicks in, according to weathertrending’s John Hammond.

He said: “Thanks to a warming Continent, the chill will be much more muted now, although a brief sleety flurry can’t be ruled out on the highest ground of central Britain on Sunday night. The chill will linger near exposed coasts, but as the easterly fades, and under strong sunshine, the air will steadily warm out through the week.

“West looks best for both blue sky and temperatures, and with high pressure still dominant, it’s a mostly dry theme across the whole of the country for several days to come.”

Weather models reveal roasting flames from Europe creeping towards Britain in a southerly airflow through the rest of March.

They show temperatures through next week consistently hovering around the mid- to high-teens.

Parts of the country are expecting highs of 21C (70F) through the end of March, according to some forecasters.

“The end of the weekend will be cooler although next week sees high pressure over Scandinavia shift allowing warmer air in from the Continent.

“It is certainly going to bring the warmest spell of weather so far this year in time for the spring equinox.

“We expect plenty of sunshine through the next week, and there is a chance that we see 21C in parts.”

Scotland will enjoy the warmest weather through the next few days thanks to warm air sinking over mountains–the so-called foehn effect.

The best of the temperatures will be in northern regions through the end of the month, he added.

He said: “As the week unfolds high pressure will migrate towards us and we will see temperatures in the mid- to high-teens, although there could be 21C recorded somewhere.

“For the most part, aside from some morning frosts, it is going to be very spring-like.”

Today is forecast to be the best day of the weekend with high pressure to bring blue skies and plenty of sunshine.

The Met Office predicts a ‘cracking’ weekend although chilly winds in parts will make it feel cooler tomorrow.

Met Office meteorologist Alex Deakin said: “There is a lot of dry and fine weather to be had this weekend, and Saturday will be a cracking day if you like spring sunshine.

“It will be a sunny Saturday and the sun is getting stronger, so we will see temperatures getting up to 15C, 16C or 17C in some spots.

“It won’t be as warm on Sunday, but temperatures will still be in double digits, and it will be a cloudier and cooler day.

“There is a lot of fine weather to be had this weekend.”

Met Office meteorologist Clair Nasir added: “Saturday temperatures will be in the mid-teens, it is a fine weekend to come, look out for the wind on Saturday and a little showery rain towards the southeast on Sunday.

“Next week turns warmer and drier yet again.”