The whole of the UK is expected to bask in a nine-day heatwave from tomorrow, as forecasters predict the majority of Britain will enjoy warm sunshine and relatively clear skies. The best of the weather will be seen in the South East of England, which will surely come to the delight of many Britons now the Government has permitted sunbathing in public places – so long as people adhere to social distancing guidelines.

BBC Weather reports the sunny weather seen on Friday will continue into the weekend and well into next weekend, especially in the South East of England.

Thermometers will rise into the low 20s on Sunday, marking the second of what could become a nine-day heatwave.

Monday will see temperatures rise even further, with Tuesday expected to be particularly warm and bright as a warm plume of air moves up through southern Europe.

Temperatures could rise to 24C for the south of England, with Wednesday seeing the best of the sunshine with highs of 25C. 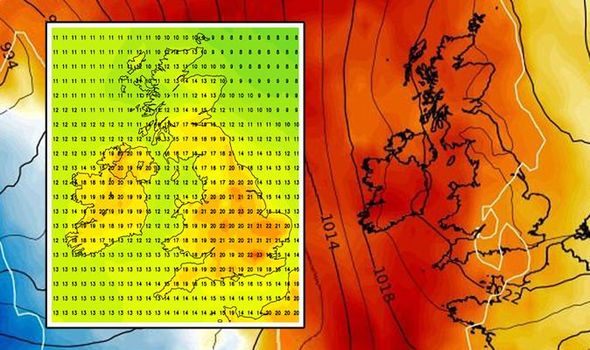 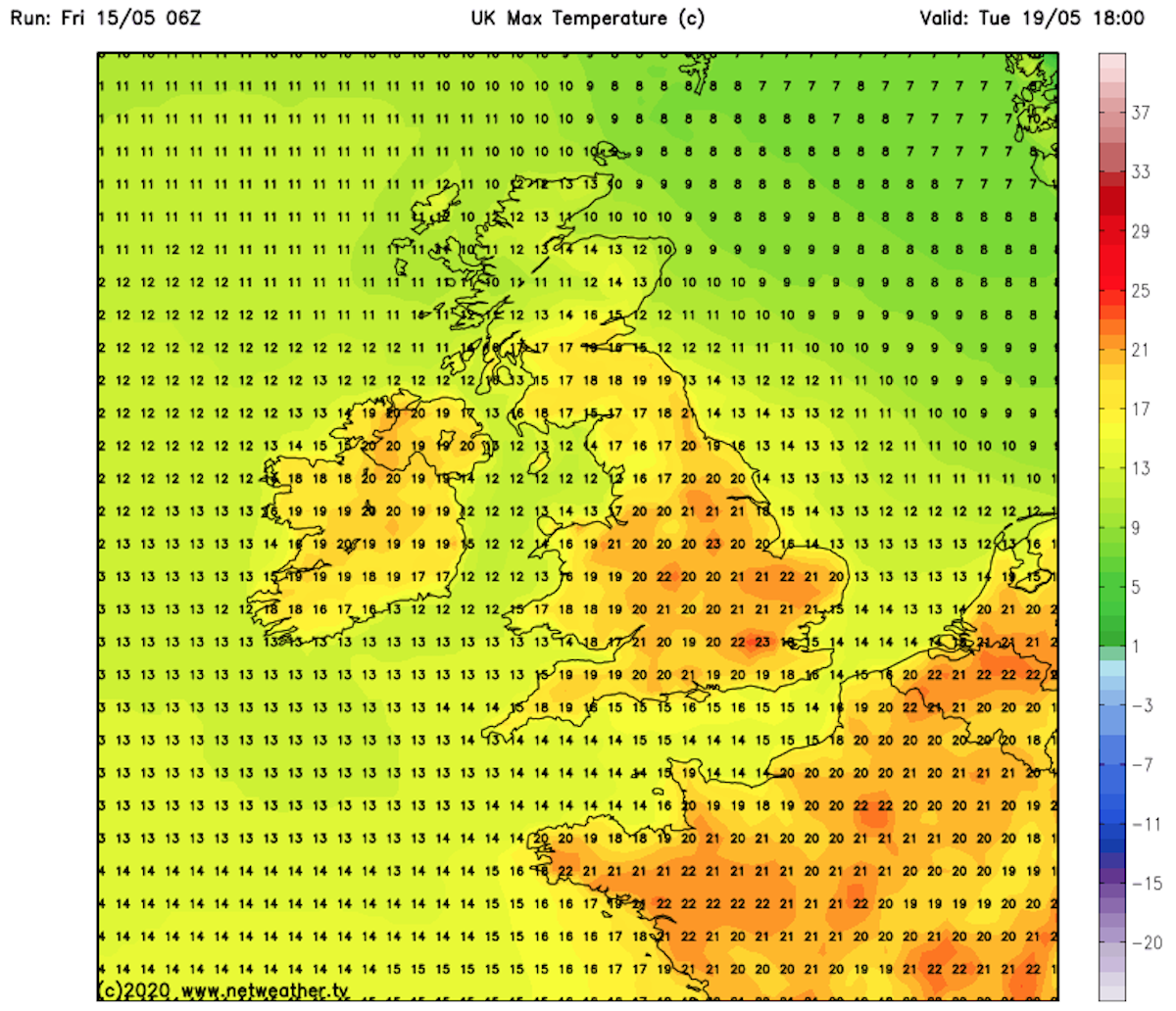 The whole of the UK is set for a scorcher on Wednesday, as temperatures rise to the early 20s for parts of Wales, the north of England and even Scotland.

Northern Ireland is also forecast to be dry and bright, with highs of 17C.

But the experts caution the sun may be shielded by clouds from the end of the week, with a gentle breeze moving in from the South East.

The sunny spells will remain for the rest of the week and into the bank holiday weekend, albeit with more cloudy skies, forecasters claim.

JUST IN: Britain to publish ALL documents to show EU threats in trade talks 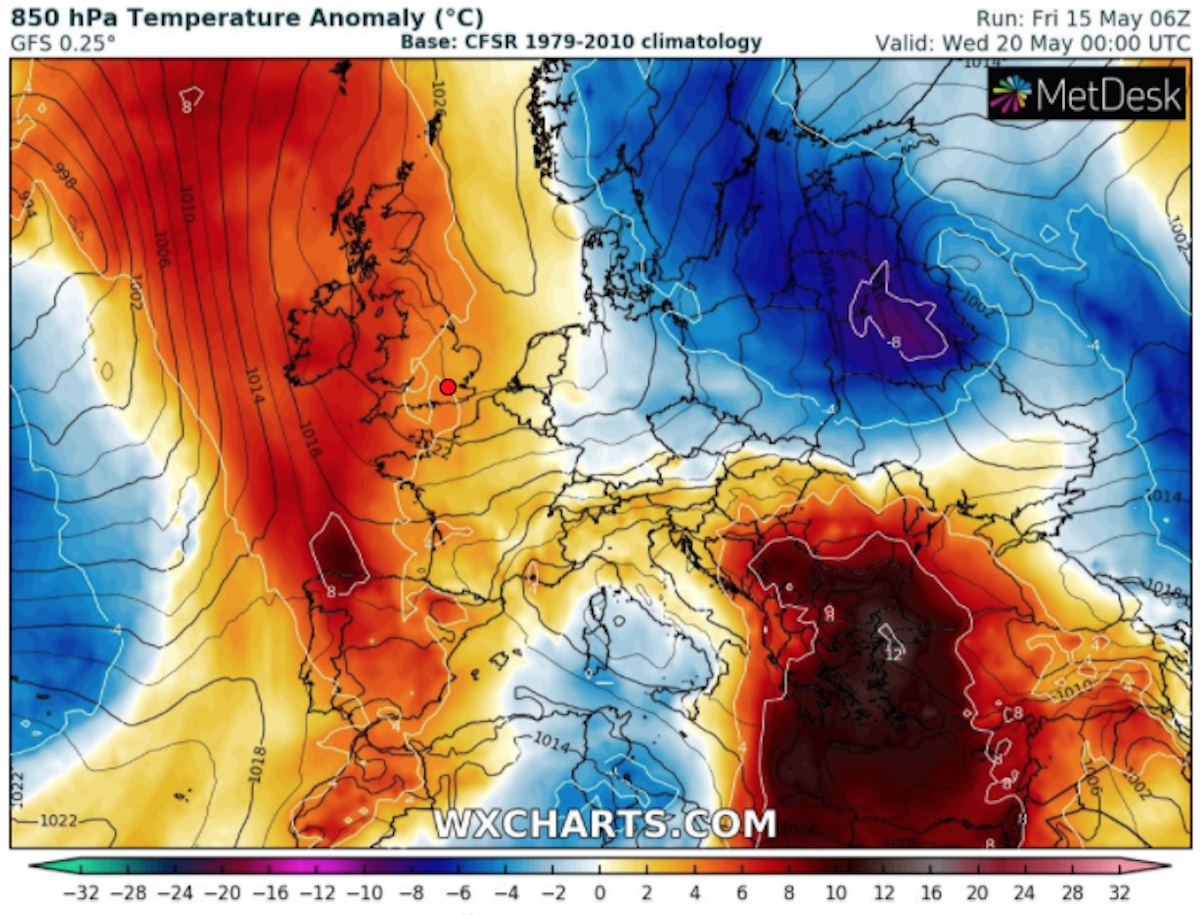 The BBC Weather outlook states: “High pressure will lie over the far south of the UK in the next few days, ensuring mostly settled and dry weather.

“There will be sunny spells but cloud will tend to build-up in the middle of the day.

“Winds will be gentle or moderate and temperatures will climb near the low twenties in some places.”

WxCharts also predicts the warm weather will continue well into next week. 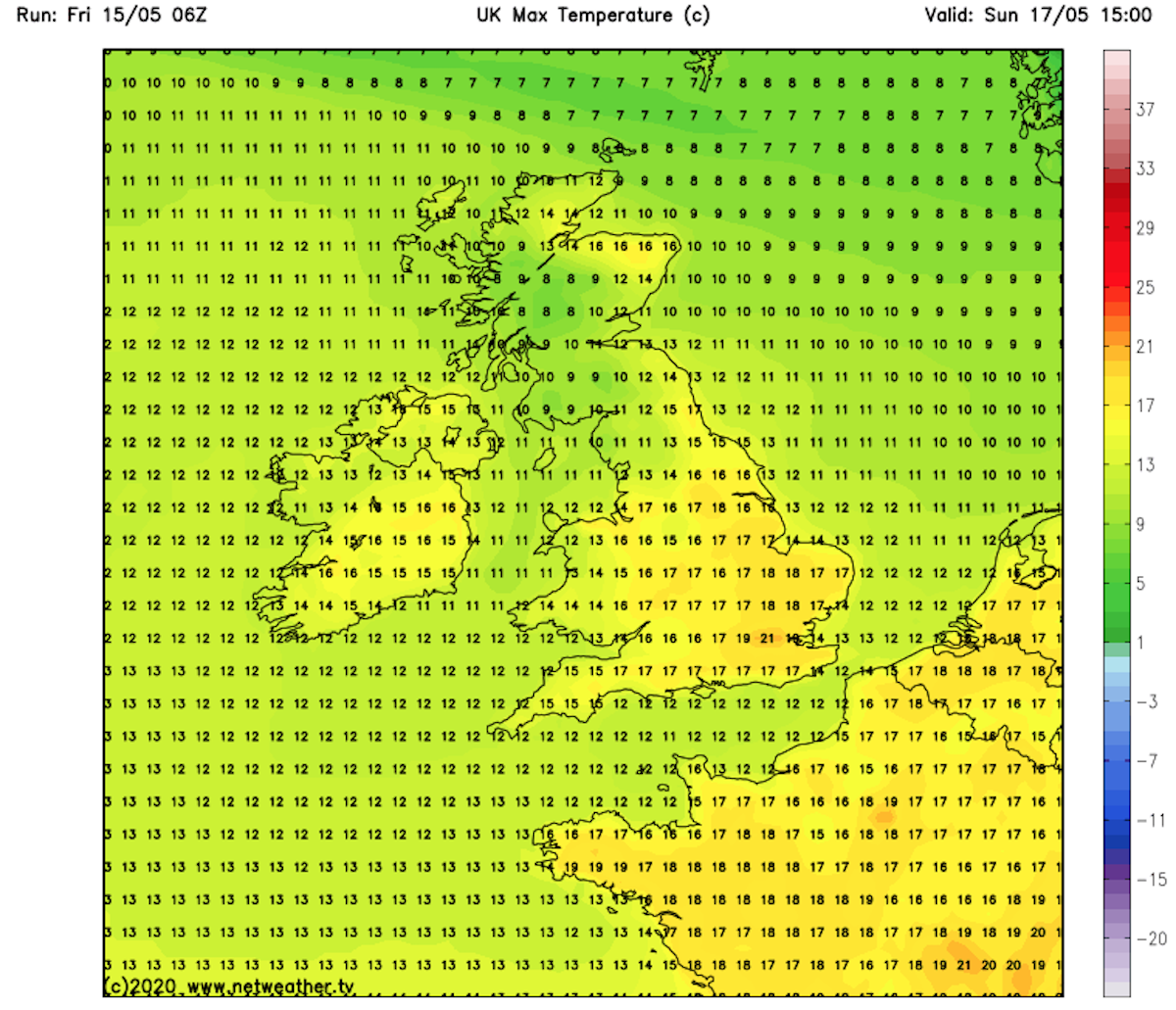 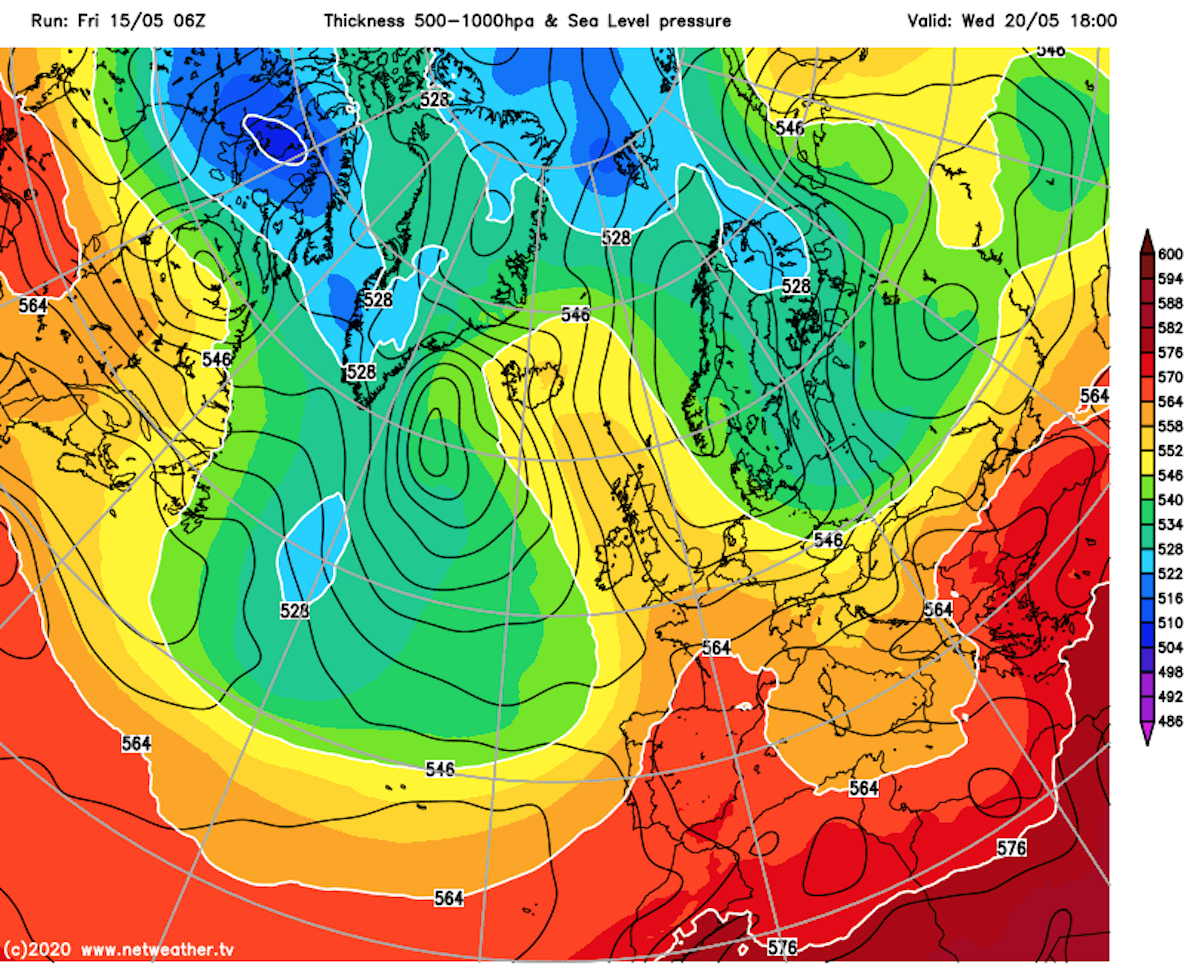 The forecasters predict clear skies and highs of 21C in the south from the weekend.

They then forecast the mercury will steadily rise throughout the week and into the bank holiday weekend.

The Met Office states the week will become “increasingly warm” from Sunday.

It writes: “Staying dry on Sunday and into early next week, with variable cloud amounts, but some spells of sunshine. 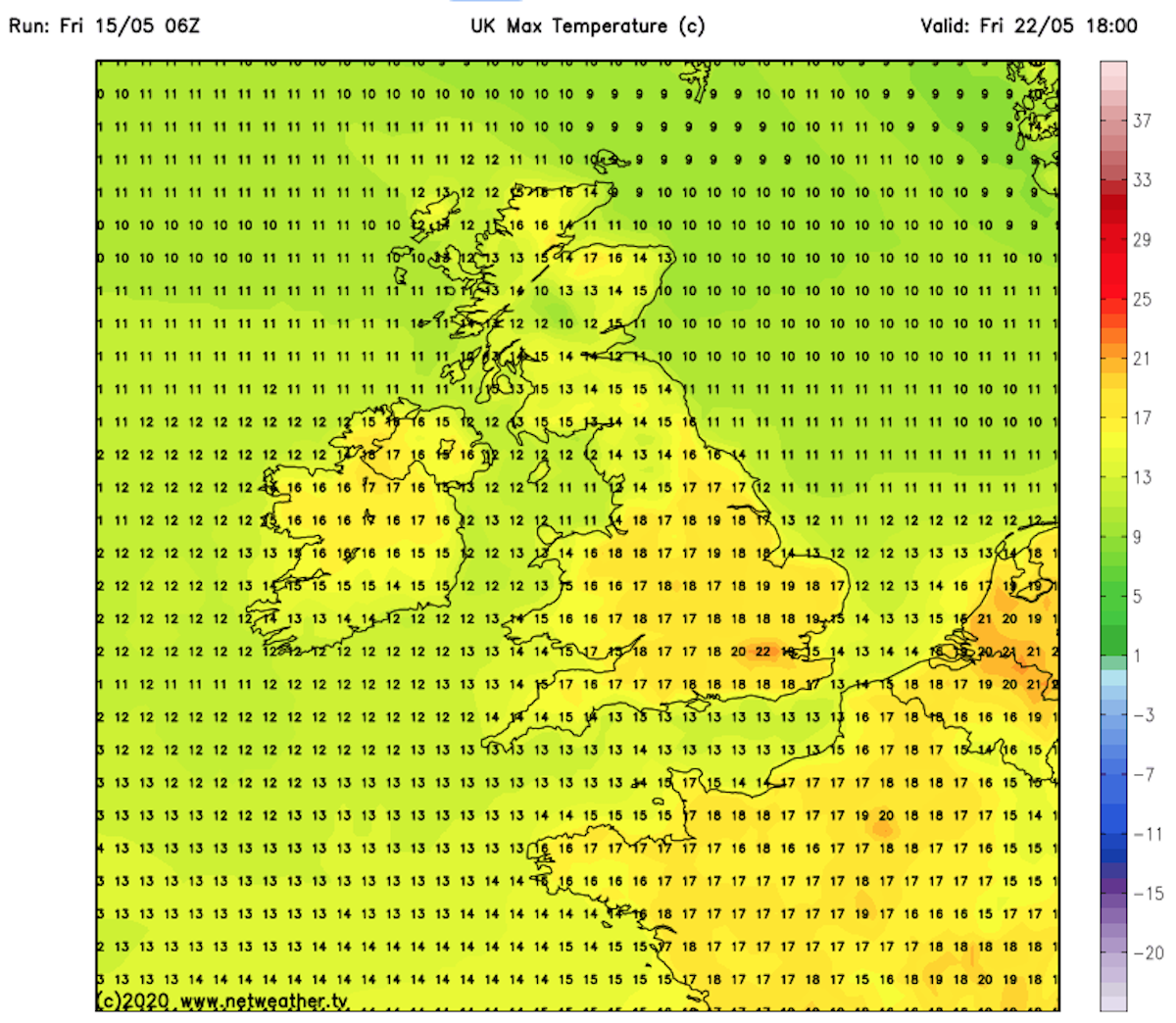 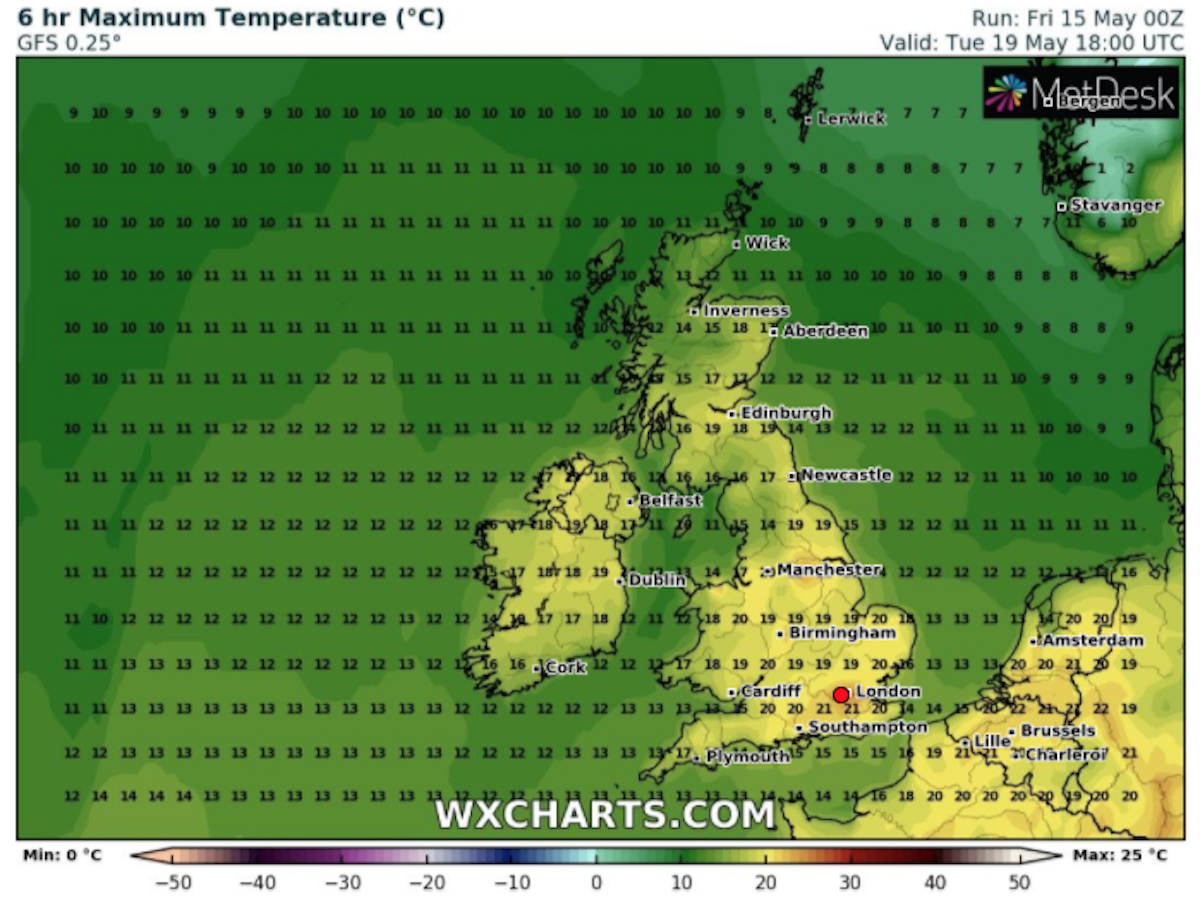 “Increasingly warm through the period, perhaps very warm on Tuesday.”

With temperatures set to increase in the coming days, leading bookmakers have slashed odds on this summer to go down as the hottest on record.

Alex Apati of Ladbrokes said: “A scorching summer is on the cards with record-breaking May temperatures ready to roll into the coming weeks and months.”