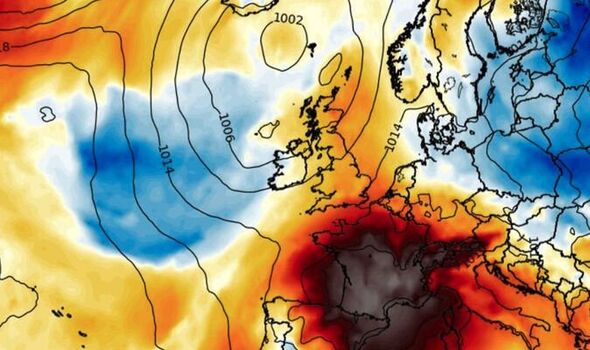 London and south-eastern Britain could reach 25C in the remnants of the Continental plume which drove the May mini heatwave. But Britons will then be on alert for torrential rain and thunder carried on a raging jet stream about to plough through the nation.

Southern regions will cling on to some of the warmth through the week while thermometers in Scotland and the north dip to single figures.

Jim Dale, meteorologist for British Weather Services, said: “The next few days are going to be unsettled as the jet stream moves closer to the UK and we see more in the way of rain.

“Southern regions are still in the warm air which came up from Spain, so there will be atmospheric instability which could bring the odd thunderstorm.

“But otherwise, low pressure will be the main driver of the weather, and for the next few days it will stay unsettled, and while it will be warmer in the south, Scotland and northern Britain will be cooler.”

However, sun-lovers will only have to wait a few days before cracking open the sun cream again.

High pressure will start to build at the end of the week with next weekend shaping up to deliver another burst of warmth.

Mr Dale added: “High pressure returns at the end of the week, and while there will be the risk of further thundery showers, the pleasant weather will return.

“The weather is very changeable at the moment, and this is what we are going to see over the next few days.”

Scotland and northern Britain will see the biggest drop in temperatures this week with the region also in the firing line for the wetter conditions.

Thermometers will hit 24C in southern Britain today before sinking to average next week, according to the Met Office.

Meteorologist Aidan McGivern said: “It is staying largely dry in the southeast on Sunday with some sunny spells and temperatures a little higher than Saturday, 23C or perhaps 24C in London, the high teens everywhere else and mid-teens in Scotland.

“The mixed picture of sunshine and showers continues next week with temperatures hovering around average.”

Bouts of low pressure stirring up the weather will be driven by a strengthening jet stream, the Met Office said.

They will unleash strong gusts across northern Britain later this week with the best of the sunshine across southern Britain.

A Met Office spokesman said: “A strengthening of the jet stream, which plays a crucial role in driving weather systems towards the UK, looks set to bring spells of unsettled weather through next week for much of the country, although there will still be some periods of drier weather, most likely in southern and central areas.

“That theme of unsettled weather looks likely to continue through the latter part of next week with some longer spells of rain possible in northern areas.

“The best of any sunshine is looking to be most likely in the south and southeast.”

James Madden, forecaster for Exacta Weather, added: “This is in keeping with the more changeable forecast for May, with some quite gloomy and cloudy weather on the way and the risk of widespread showers.

“Temperatures in parts could still reach the mid-20Cs during the latter part of the month.”