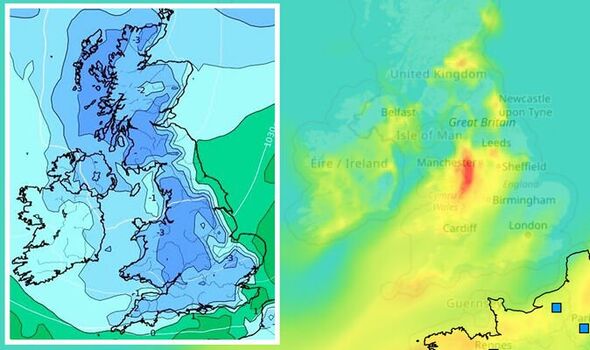 They blame high pressure behaving like a ‘lid’ trapping bitter Arctic air over the country and preventing wind from clearing smog and traffic fumes. The Department for Environment Food and Rural Affairs warns air pollution levels will reach ‘moderate’ across Wales, parts of southwest England, the southwest, central Britain and Scotland. A spokesman said: “Areas of ‘Moderate’ [air pollution] may become more prevalent as high pressure brings continued lighter winds across the UK.”

Levels of PM2.5 will rise up to 23 micrograms per meter-cubed around southern and central Britain with readings of 35-plus expected in parts of the north.

Moderate air pollution levels usually cause no problems for those without medical conditions, although others should take care.

The British Heart Foundation advises: “If you experience symptoms of your medical condition, or have sore eyes, a sore throat or a cough, you should consider reducing intense physical activity outdoors.”

High pressure is also responsible for the chilly snap which threatens sub-zero temperatures and harsh morning frosts this weekend.

It will trap freezing air across the country after it has swept across the Artcic, Scandinavia and the North Sea.

Rather than blue skies and golden rays, Britons can expect a fug of gloomy grey cloud through the coming days.

Met Office meteorologist Alex Deakin said: “High pressure will generate a lot of cloud on Thursday, although there may be some sunny spells, it will be the east which is most likely to stay cloudy, and here it will be chilly.

“Where there is sunshine, temperatures could lift into mid- or high teens by the afternoon although it will be cold on Thursday night with temperatures tumbling well into single figures.

“A touch of frost is likely on Friday morning where that high is sitting right over us.”

Temperatures will plunge in regions which see clear skies while bitter sea winds make it feel even colder, he warned.

He added: “It will be very chilly on Wednesday with a breeze coming in off the sea, where it is cloudy it does feel chilly.

“Where we have clear skies, temperatures will tumble well down into single figures towns and cities will stay just above freezing but in rural fronts there is the risk of frost through the week.

“There is the potential for frosts through this week.

High pressure responsible for the freak spring weather will wedge over Britain forming a ‘lid’ keeping cold air trapped beneath.

Icy conditions will dig in through the rest of the month and into the start of May, forecasters warn.

Jim Dale, meteorologist for British Weather Services, said: “This high pressure is not shifting and is acting as a ‘lid’ keeping cold conditions over Britain.

“Cold air is emerging out of Scandinavia and being drawn across the North Sea into Britain by this high.

“This cold air is not being allowed to escape, which is why we expect to see lower than normal temperatures through the end of this month and into the start of May.”

Met Office meteorologist Aidan McGivern said: “High pressure continues to dominate from the north and that means we are pulling in slightly cooler air from the southeast and a lot of cloud.

“The cool breeze is going to have an impact on the temperatures.”

“Temperatures will be a little lower on Wednesday comparted to Tuesday, and high pressure will lead to a prolonged settled spell.

“Wednesday night into Thursday will be another chilly one, gardeners beware.”

Where the sun breaks through over the next few days temperatures will lift into mid-teens.

However, overnight and in regions blighted by cloud, the mercury will hover between freezing and single figures.