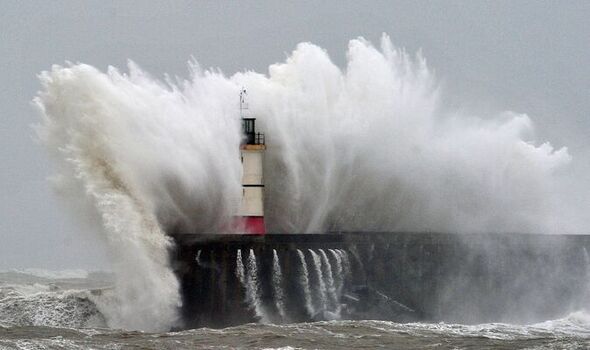 But forecasters have warned the opposite is more likely, with strong winds and downpours set to batter the nation as the remnants of a tropical storm move in.

From today onwards, showers will reach south-western parts of the UK, southern Scotland and Northern Ireland and will continue into tomorrow.

Gusts of up to 55mph are expected in some parts of the country tomorrow as a result of a “vigorous” lowpressure system.

There’s even a flood alert at Bourne Brook in Staffordshire, where heavy rainfall has raised the water level.

Met Office deputy chief meteorologist Adam Thornhill said: “The low pressure on Wednesday will bring showers to most areas of the UK, but the heaviest, slow-moving downpours are expected in northern areas, including Northern Ireland, with a chance of thunder and lightning.

“Although rainfall amounts are still open to some uncertainty, there’s a chance some areas in the North could see in excess of 20mm of rain within a three-hour period.

“This will largely break up later in the day on Wednesday, leaving behind just a few showers by evening.”

The unsettled weather will continue on Thursday and Friday when the remnants of Tropical Storm Alex, which has plagued Florida, will bring unseasonably strong winds to the north-west of the UK.

But Britons could still see glimpses of sunshine this weekend.

Looking ahead, Met Office spokesman Stephen Dixon said: “The best of any sunshine will be in the south.

“The strongest winds will be in the far north of the UK, but will not be as strong as winds on Thursday and Friday.”