According to Ms Ayers, the rest of the week is set to be dominated by high pressure.

She said: “Elsewhere it will remain dry with some clear spells and it’s here that it will be a cool night with temperatures dipping into single figures.

“Tuesday will be another largely fine and dry day, though, there will be some showers across southwest Scotland, Northern Ireland and Southwest England at times.

“It’ll be cloudy across much of Scotland and southern and eastern England with the best of any sunny spells across central and southwest England, as well as Wales. 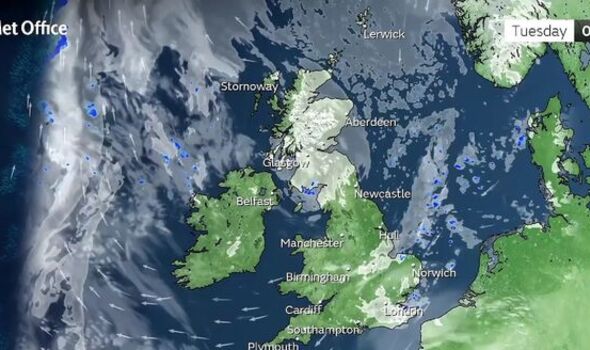 “It’ll be a cooler day than today, especially for Scotland and northwest England.

“Showers will ease through Tuesday evening to allow for a generally dry night.

“Though it will be a cooler night than previous nights, particularly across the north.

“Now looking ahead to the rest of the week and it will be a settled start with high pressure dominating the weather.

“Though by the end of Thursday and as we head into Friday, low pressure will dominate with weather fronts moving in from the north and west.”

An additional forecast on the Met Office website confirmed that Tuesday would be mostly dry with some showers.

They said: “Most areas fine and dry with warm sunny periods.

“Cloudier with a few showers for parts of western Scotland, Northern Ireland and the far east and southeast of England though.”

However, Tuesday evening could see some cooler weather, particularly in Scotland.

“A few showers lingering in the east.

“Chilly across northeast of Scotland.”