A freezing polar plume is forecast to trigger sub-zero lows across the UK during this evening and tomorrow, bringing wintry weather with it. Scotland is bracing for 16 inches (41cm) of snow on Thursday in central regions, according to WXCHARTS’ latest snow depth models. North-western areas of England including Carlisle are also likely to be hit with 2 inches (7cm) over the next 24 hours.

Temperatures are predicted to plunge as low as -4C in Scotland tomorrow, with north-west England including Liverpool seeing -2C and even London averaging 0C.

He said: “We could have significant snow in the north on Wednesday and Thursday while southern counties tend to have rain. Generally mixed conditions will continue into the weekend.

“Thursday has a low of uncertainty but the band of rain will continue to sit across central and eastern regions. 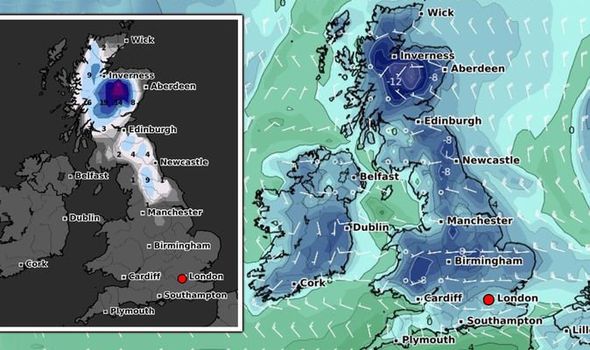 “As cold air digs in from the east we could see more and more of the rain turning to snow.

“Snow is most likely over high ground in the north but some computer models hint at the snow becoming widespread and potentially disruptive. Western regions will be drier and milder.

“We do it all over again on Saturday with another band of rain moving in from the west and once again as the rain bumps into the cold air it could turn to sleet and snow in the north and east. 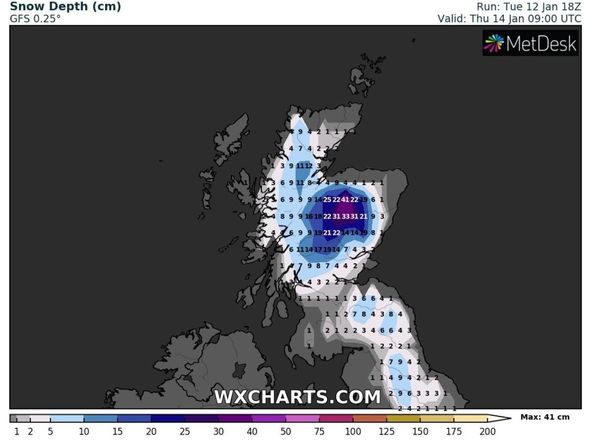 The BBC’s long-range forecast added cold air from the Arctic that is currently spreading into Scandinavia and Russia is also expected to hit the UK.

The forecast said: “Through mid-January the weather will turn unsettled and begin to become rather changeable, with some highly variable temperatures expected for the next few weeks.

“This is due to the colder Arctic air being displaced into Scandinavia and Russia from the polar vortex.

“This air will occasionally feed into the UK, bringing some colder than normal days mixed with days of milder sub-tropical air pushing in from the southwest.” 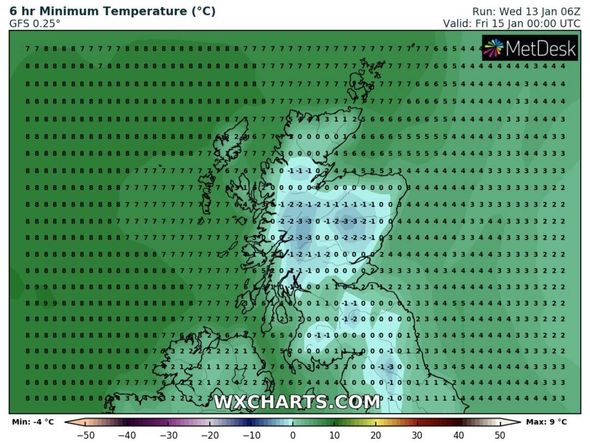 The Met Office predicted heavy snowfall to strike hills in the north tonight.

It said: “Tonight, rain, sleet and snow in north and east of the UK, with some heavier falls of snow over hills in north. Rain turning heavy, across west Wales and northwest England.

“Thursday will see further rain across England, Wales and Scotland, falling as sleet and snow in places, but clearing south and east through the afternoon. Drier with some sunshine across Northern Ireland.”

The Met Office has also issued an amber snow warning for parts of Scotland and northern England today that will last from 3pm until 10am on Thursday. 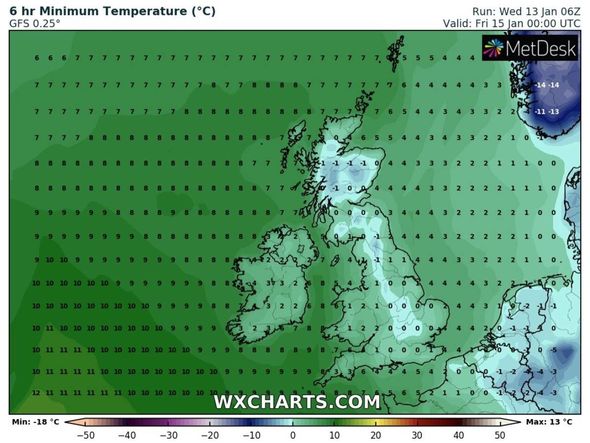 The warning said: “Rain will turn to snow across Scotland on Wednesday afternoon and evening, initially on high ground, but increasingly to lower levels.

“During Wednesday evening and night the risk of snow will extend southwards into more of northern England.

“10 to 20 cm snow is likely to accumulate above 200 metres with greater amounts at higher elevations.

“Amounts at low levels (below 100 metres) are less certain, but 5 to 10 cm is likely in some places by Thursday morning.

“Snow will persist into Thursday morning, slowly dying out during the afternoon.” 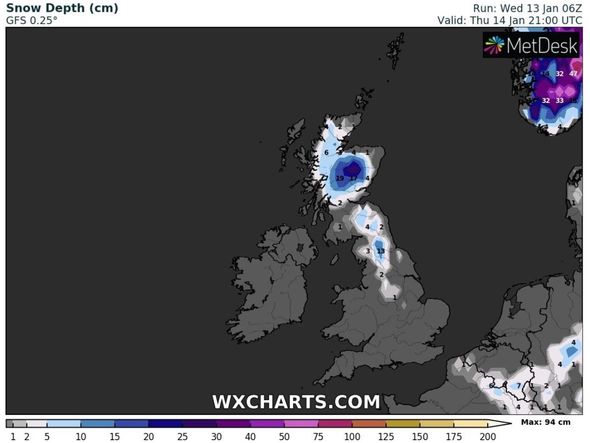 Jo Farrow at Netweather said snow could fall in north-western parts of England including Cumbria and even the Peak District.

She said: “By Thursday, there could be a bit of snow over the Peak District and Cumbrian Fells and Yorkshire Dales but the main areas for lying snow look to be the hills and mountains of NE Britain inland.

“For most, it will be a slushy mix of rain, sleet and wet snow with ice as well.

“However, uncertainty remains so there could be snow to low levels.”