The UK is forecast to see a sunny weekend, with highs of 20C predicted for some regions. But according to the latest long-range weather forecasts, some parts of the UK could also witness another sunny spell over the Easter bank holiday weekend.

According to the AccuWeather daily forecast, Saturday, April 11 will see “plenty of sunshine”, with highs of 15C possible in some areas.

According to the Netweather long-range forecast, some parts of the UK will see “longer spells of dry weather” during this period.

The Netweather long-range forecast for Monday, April 6 to Sunday, April 12 reads: “During the latter part of this week the Atlantic trough looks set to weaken which will allow high pressure to come close to the south and east of the country, bringing longer spells of dry weather in between the rain belts for central and eastern and especially southeastern parts of England, but the north-west of Britain will be more prone to continued unsettled and wet weather with a continued west to south-westerly flow and fronts moving in from the south-west.”

Some parts of the UK will see temperatures two to three degrees above the long-term average, with many UK regions seeing “above normal” sunshine totals. 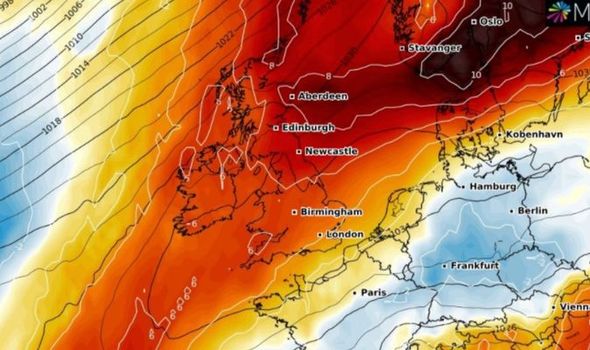 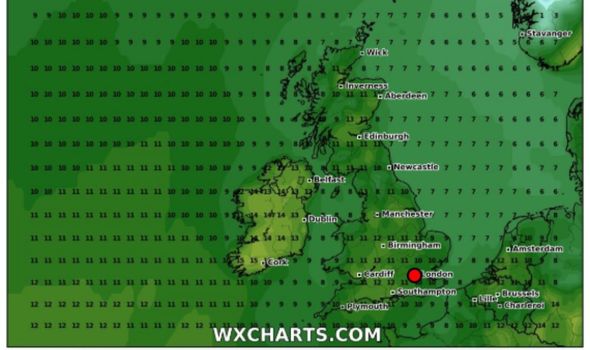 But it looks like some regions, such as Wales and western England, will see less sunshine this bank holiday weekend than in previous years.

The forecast adds: “Mean temperatures are expected to be about 1C above the 1981-2010 long-term normal in Northern Ireland and western Scotland, but 2 to 3C above in most eastern parts of Britain, with inland parts of the south-east probably seeing the largest anomalies.

“Rainfall totals will be near or rather below normal in eastern England and in eastern and northern Scotland, but mostly above normal elsewhere, especially in Northern Ireland, much of Wales and the western side of England.

“Sunshine totals will be above normal in the east, but below normal in Wales and western England and in counties bordering the English Channel.” 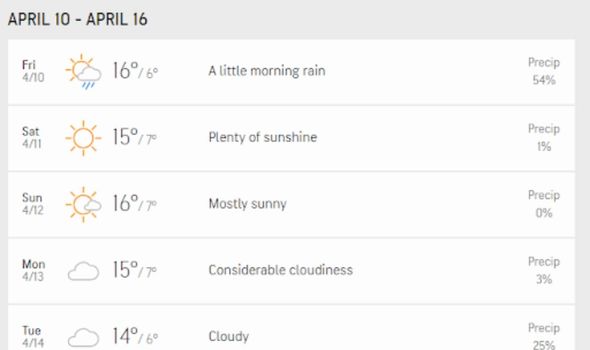 WXCHARTS maps, which use data from MetDesk, show much of England and Wales will be warm on Easter Sunday.

In most parts of the UK on Easter Monday temperatures will also be comfortable, with max temperatures of 13C possible in some areas.

For this weekend, the Met Office is forecasting bright sunshine and highs of 20C for the UK.

Met Office spokesperson Bonnie Diamond told The Sun: “The heat is being turned up this weekend.

Hurricanes: ‘Ominous sign’ areas will cause ‘above normal’ hurricanes [ANALYSIS]
BBC Weather: Snow and sleet freeze UK as temperatures plummet [FORECAST]
Mini heatwave UK: What is a mini heatwave? Will there be one? [EXPLAINER]

“There’s plenty of sunshine on it’s way and for most of us it’s going to feel like Summer.

“It is fair to say we could see a heatwave on the cards.

“The best of the warmer weather will come on Sunday with 20C highs.

“Temperatures will remain above the average for this time of year with 18C possible on Monday, Tuesday and even Wednesday. 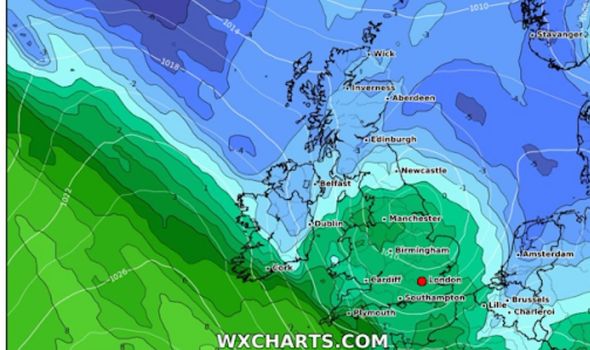 “These much higher temperatures are coming from Europe on the back of southerly wind flows.”

The warm weather will no doubt be a welcome relief to Brits, who are currently staying at home under the Government’s social distancing measures.

People have been informed only to leave their houses for essential purposes, such as buying food and medicine.

Although large gatherings and household visits have been banned, the warm weather could see many families heading out to their gardens over the weekend to enjoy the sunshine.