After the scorching 33C highs towards the end of June, the weather has taken a turn, with cooler conditions, rain and wind across much of the UK. There have also been wind and rain warnings in place for much of the country, leaving many Brits to wonder where the summer weather has gone.

Yellow weather warnings for wind are in place on Sunday, with the Met Office cautioning strong winds could cause some disruption.

The Met Office warns: “An area of low pressure is expected to develop over the Atlantic and track eastwards across central Scotland during Sunday with strong winds developing across a large swathe of the UK.

“Gusts of 50-60 mph are most likely over and to the east of high ground, particularly the Pennines which may lead to some travel disruption.” 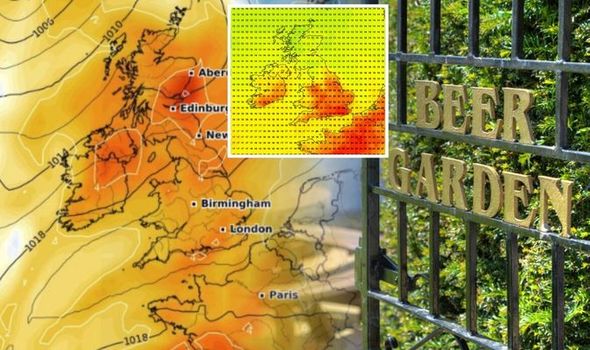 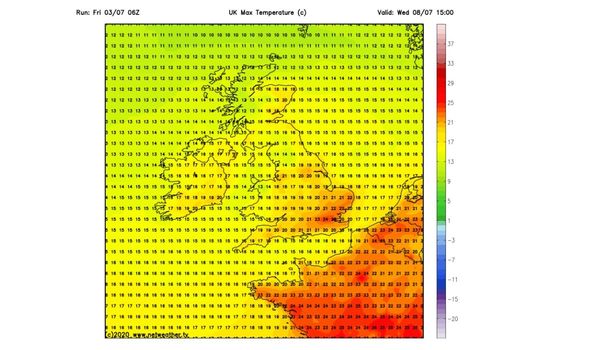 The Met Office cautions with trees in full leaf, fallen branches and damaged trees may cause some localised travel and power disruption.

While there is high confidence in the development of the low-pressure system, there is the potential for a much deeper system with stronger winds and a risk of severe gales around coasts and through the Central Belt.

However, it’s not all bad news, as hot weather is forecast to return as July continues.

Temperature maps from Netweather turning red and showing highs of 26C in the second week of July. 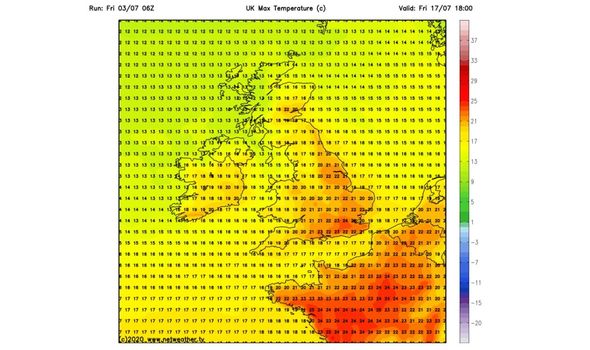 With pubs allowed to open in England from July 4, the hot weather will arrive just in time.

Customers will be allowed to sit and enjoy a pint from July 4, provided venues can adhere to the Government’s safety guidelines.

During a press conference on Friday afternoon, Boris Johnson called on Brits to act responsibly. 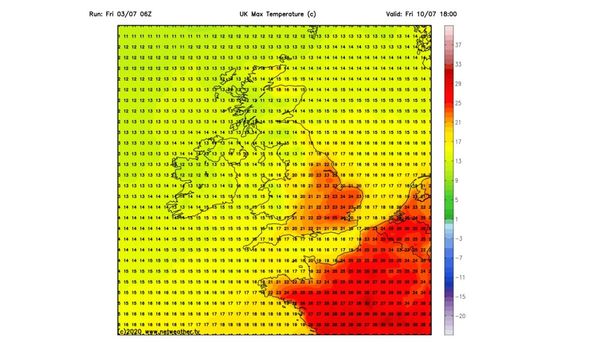 He added he would not hesitate to act if needed to slow the spread of the virus.

With the return of the hot weather, heading to the beer garden may be on the cards, however its worth checking with the venue whether you should book a table ahead of time.

The Met Office long-range forecast for Tuesday, July 7 to Thursday, July 16 predicts a period of “more settled” conditions, where high pressure will “dominance” across the UK.

The long-range forecast reads: “Whilst scattered showers, or even spells of rain with strong winds, will continue to affect the west, and perhaps the whole country at times, these are likely to be fewer and further between than of late. 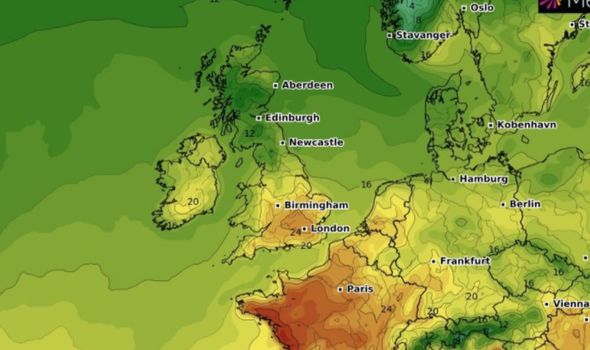 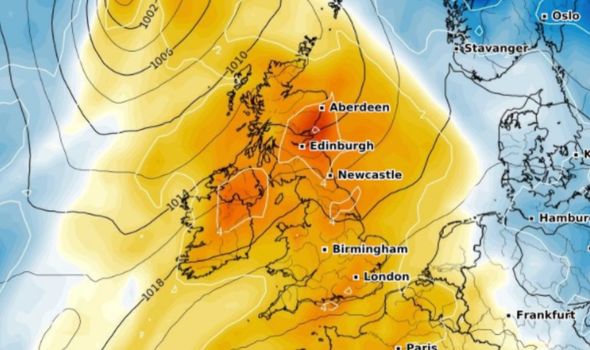 “Such spells look likely to become increasingly confined to the northwest as we go later into the period.

“Temperatures will remain around average for the time of year; often rather cool in the north and in more unsettled spells, to rather warm, or even locally warm and humid, in drier, sunnier weather in the south.”

Netweather Maps show warm weather in the second week of July, with temperatures of 25C possible on Wednesday, July 8.

This continues into the following weekend, with highs of 23C on Sunday, and 22C into Monday, July 13.

This Evening and Tonight

Most parts cloudy with outbreaks of rain, heavy over western hills.

Becoming drier for a time over much of Scotland and also to east of hills further south. Breezy.

Generally cloudy with further rain and drizzle, most persistent in the north and west.

Breezy in the south, but feeling fairly humid. Some sunny intervals to east of hills.

Outlook for Sunday to Tuesday

Mainly settled Tuesday, though rain into the northwest later.