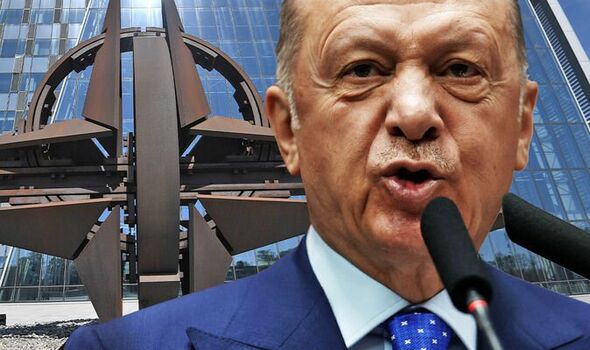 The Turkish representative stopped a vote on Finland and Sweden’s applications to join the North Atlantic Alliance, the world’s most powerful military coalition, which the two nations had officially submitted earlier in the day. NATO ambassadors hoped to agree on an accelerated accession process at the “classified” meeting in Brussels.

NATO should be able to approve the first stage of Helsinki and Stockholm’s applications before a meeting of its leaders in Madrid on June 28 but Ankara’s reservations call into question how smooth the Nordics’ plans, which are set to redraw the geopolitical map of northern Europe, can become a reality.

Turkey’s resistance is linked to its view the two countries harbour members of Kurdish militant groups it considers terrorist organisations.

At a news conference on Monday, President Recep Tayyip Erdogan said: “Neither of these countries have a clear, open attitude towards terrorist organisation. How can we trust them?”

His comments were primarily directed at the militant group the Kurdistan Workers Party (PKK), which Ankara regards as a terrorist organisation.

Sweden has a large Kurdish diaspora, with the community considered to be one of the largest outside of the Middle East.

In Finland, the Kurdish-speaking population was estimated at just over 15,000 people as of 2020 – less than one percent of the population.

Mr Erdogan accused Stockholm in particular of providing safe haven to members of the outlawed PKK and to followers of Fethullah Gülen, who Ankara accuses of orchestrating a 2016 coup attempt.

He said: “We asked them to extradite 30 terrorists, but they refused to do so.

“So you won’t give us back terrorists, but you ask us for NATO membership? NATO is an entity for security, an organisation for security. Therefore, we cannot say ‘Yes’ to this security organisation being deprived of security.”

The president blamed NATO for its lack of support for Turkey in its battle against the PKK and other Kurdish militant groups, and accused allies of backing terrorists, citing allied arms deliveries to the People’s Defence Units (YPG), a Kurdish militia fighting in Syria.

Turkey also objects to the Nordcis’ decisions in 2019 to ban arms exports to Ankara over the country’s military operations in Syria.

NATO Secretary General Jens Stoltenberg has taken wider talks on the issue “offline”, sources told the Telegraph, with the chief said to be trying to overcome Ankara’s opposition through smaller meetings.

Hours before the Turkish veto, Mr Stoltenberg hailed the occasion, saying: “This is a historic moment, which we must seize.

“I warmly welcome the requests by Finland and Sweden to join NATO.

“You are our closest partners and your membership in NATO will increase our shared security.”

The enlargement of NATO must be approved by all 30 members and then ratified by their parliaments.

The whole membership process generally takes from eight to 12 months.

However, because of the threat from Russia, this process could be completed in as fast as two months.

Mr Stoltenberg said the alliance would “take into account the security interests” of all members and was “determined to work through the issues and reach rapid conclusions”.

NATO, Washington and other allies, as well as Helsinki and Stockholm, have all expressed optimism they can overcome Turkey’s objections.

Nato, the US and other allies, as well as Helsinki and Stockholm, have all said they are optimistic they can overcome Turkey’s objections.