US president says reports on Boris Johnson’s condition ‘so shocking’ as other world leaders send their well-wishes. 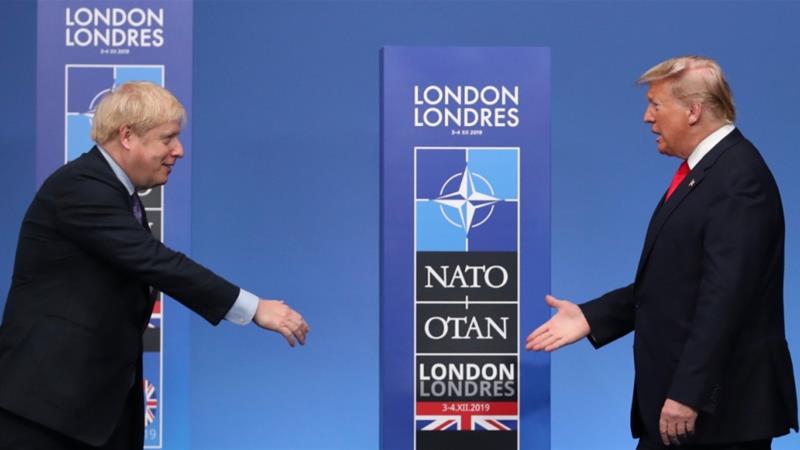 US President Donald Trump said late on Monday that he was saddened to hear that British Prime Minister Boris Johnson had been moved to an intensive care unit after his coronavirus symptoms worsened and that Americans were praying for his recovery.

Trump was the latest of a number of world leaders to send good wishes to Johnson, 55, who was admitted to a hospital in London on Monday night, after suffering persistent coronavirus symptoms, including a high temperature, for more than 10 days.

“It was just so shocking to see that because you know what that means – intensive care is a big deal with regard to what we’re talking about. That’s a very big deal. Very scary deal.”

The British prime minister’s office had said Johnson was in good spirits and still in charge, though his condition deteriorated in the early evening on Monday, and he was transferred at about 18:00 GMT to an intensive care unit – where the most serious cases are treated – at St Thomas’ Hospital in London.

Messages of support for Johnson have poured in from around the world since it was confirmed he had been admitted to hospital.

Earlier on Monday, French President Emmanuel Macron said he was wishing that Johnson would “overcome this ordeal quickly”.

“All my support for Boris Johnson, his family and the British people at this difficult time.”

Canadian Prime Minister Justin Trudeau also said he wished “for a full and speedy recovery” for his British counterpart.

“My thoughts are with you and your family right now. Hope to see you back at Number 10 soon.”

Meanwhile, Irish Prime Minister Leo Varadkar said: “Boris Johnson is in our thoughts tonight. We wish him a speedy recovery and a rapid return to health.”

Michel Barnier, the chief European Union Brexit negotiator,  also said his thoughts were with Johnson and his family. Carrie Symonds, Johnson’s 32-year-old partner who is pregnant, said she had coronavirus symptoms but was now feeling better.

Britain has no formal succession plan should the prime minister become incapacitated but Johnson has asked Foreign Secretary Dominic Raab to stand in for him while he is sick.

“All the country’s thoughts are with the prime minister and his family during this incredibly difficult time.”

David Cameron, former British prime minister, said Johnson was “in great hands” and that the country wants him “safe, well and back in 10 Downing Street.”

Theresa May, Johnson’s predecessor, said her “thoughts and prayers are with Boris Johnson and his family as he continues to receive treatment in hospital.”

London Mayor Sadiq Khan, who has clashed politically with Johnson, said he was “praying for the prime minister’s swift recovery tonight.”

“Guy’s and St Thomas’ NHS has some of the finest medical staff in the world and he couldn’t be in safer hands.”

On March 27, Johnson became the first leader of a key power to announce that he had tested positive for COVID-19.

Medics said the condition of patients with COVID-19 can deteriorate after about 10 days, with some developing pneumonia.

Johnson, who is not a smoker, said recently that he wanted to lose weight. He plays tennis and while mayor of London used to cycle around the capital.

The face of the 2016 Brexit campaign, he won a resounding election victory in December before leading the United Kingdom out of the European Union on January 31.

He has faced criticism for initially approving a more modest response to the new coronavirus outbreak than other European leaders, saying on March 3 that he had been shaking hands with coronavirus patients.

He changed tack when scientific projections showed the strategy could have led to a quarter of a million deaths in the United Kingdom.