Home » World News » Trump says US will have surplus of ventilators 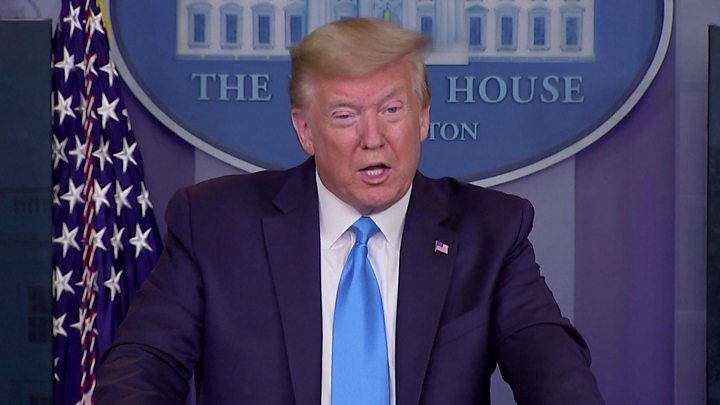 President Donald Trump says the US will soon have more ventilators than it needs to help those suffering with coronavirus across the country.

The US “won’t need anywhere near” the additional 110,000 devices that it will have at its disposal, he said.

He added that any surplus could be distributed among “desperate” countries fighting the virus, including the UK.

Mr Trump also threatened to end funding for the World Health Organization over its handling of the pandemic.

The president accused the United Nations agency of being biased towards China while issuing its guidance during the coronavirus outbreak.

His remarks came as the US recorded a daily death toll from Covid-19 of more than 1,800. The country has nearly 400,000 known infections, according to figures compiled by Johns Hopkins University.

New York state, one of the worst affected areas, is on the cusp of overtaking the entire country of Italy in its confirmed number of coronavirus cases.

What did Trump say?

Speaking during the daily Coronavirus Task Force briefing at the White House on Tuesday, Mr Trump said the US had 8,675 ventilators in a national stockpile, with “a total of 110,000 ventilators coming over a short period of time”.

However he said the majority, some 60,000 devices, would not be received until 29 June.

“I don’t think we’ll need them,” he said, “but we’ll have them for the future, and we’ll also be able to help other countries who are desperate for ventilators”.

The president said the UK had already requested 200 devices, adding: “We’re going to work it out, we’ve got to work it out – they’ve been great partners, the United Kingdom.”

Ventilators are vital in the treatment of some patients suffering from coronavirus, which can cause severe respiratory issues while the infection attacks the lungs. The devices can help keep patients breathing.

On the funding of the World Health Organization (WHO), Mr Trump said there would be a “hold on money” provided to the UN agency, which he accused of being “very China-centric”.

He tweeted that his administration would take “a good look” at its contributions and questioned some of the advice the WHO had provided in tackling the coronavirus.

“Fortunately I rejected their advice on keeping our borders open to China early on,” he said. “Why did they give us such a faulty recommendation?”

How has the WHO responded?

“For the Secretary General [Antonio Guterres], it is clear that the WHO… is showing the strength of the international health system,” Mr Dujarric said, adding that the agency was supporting numerous countries with equipment and training.

Dr Bruce Aylward, head of the joint WHO-Chinese mission on Covid-19, responded to Mr Trump’s comments by saying it was “absolutely essential that we work closely with China to understand this disease”.

The WHO’s regional director for Europe, Dr Hans Kluge, said that now was “not the time to cut back funding” as the pandemic was at its acute phase.

How is the WHO funded?

The WHO relies on funding from both government and private sources. Its funding is also split into mandatory and voluntary contributions, with the last one becoming increasingly important over the years.

In the last financial year, more than 80% of WHO funds came from voluntary contributions made by governments, private organisations like charities, and other UN agencies as well as multilateral bodies like the EU.

The US government is the largest of these voluntary contributors, accounting for just under 15% of WHO funding in 2019. But the next biggest was the Bill and Melinda Gates Foundation, making up nearly 10% of funding.

Other countries which made significant voluntary contributions in 2019 include the UK (7.8%) and Germany (5.7%)

It is worth adding that the US also owes the WHO most in terms of mandatory contributions. Figures for March 2020 show that the US still had more than $99m (£80m) in outstanding payments, much more than anyone else.