U.S. President Donald Trump claimed to have won a non-existent award from Cuban-Americans on Sunday, just a few days after his campaign tried to drum up support by touting his nomination for the “Noble” — not Nobel — peace prize.

The president boasted about receiving the “Bay of Pigs Award” — which does not exist — during a Latinos for Trump event in Las Vegas on Sunday.

“As you know, a little while ago I received the Bay of Pigs award from the Cuban Americans in Miami,” he claimed. “It’s a big honour and they don’t give it out easily.”

Trump also bragged about the supposed award in a Twitter attack on Joe Biden, the Democrats’ nominee for president, on Sunday.

“Remember, Miami Cubans gave me the highly honored Bay of Pigs Award for all I have done for our great Cuban Population!”

There is no Bay of Pigs Award, as CNN fact-checker Daniel Dale pointed out on Sunday.

The Bay of Pigs Invasion was an infamous fiasco under former U.S. president John F. Kennedy in 1961. A U.S.-backed squad of Cuban exiles tried to invade Cuba to overthrow its leader, Fidel Castro, but failed.

The Bay of Pigs Veterans Association in Miami endorsed Trump for president in 2016, in an extremely rare statement by the group. They also gave him a plaque in 1999 and in 2016. However, the endorsement and the tokens of appreciation were not tied to any ongoing award from “Miami Cubans.”

The Trump campaign doubled down on the claim, posting a photo of one of the plaques on Twitter and calling it the “award.”

It’s not the first time Trump has inflated or misrepresented his achievements. At one of his golf clubs, for example, he had a fake Time Magazine cover of himself framed and put up on the wall. Trump has been on the cover of the magazine many times, but the one on his wall was not real, as Time itself pointed out.

He has also falsely claimed that he won the Michigan Man of the Year Award, which does not exist.

Last week, Trump moved one step closer to winning an award that does exist and that he’s often claimed he deserves. A far-right Norwegian lawmaker nominated Trump for the Nobel Peace Prize last week, citing his push to ease tensions in the Middle East.

Trump seized on the nomination as another thing to boast about on Twitter, and his campaign followed suit.

The Trump campaign also paid for a flurry of Facebook ads that misspelled the name of the prize. 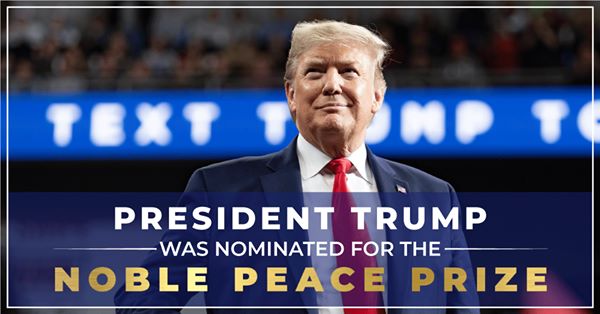 The ads were only live on Facebook for a day.

Although Trump has claimed in the past that he deserves a Nobel Prize, he has appeared not to know much about it.

On Apr. 26, for example, he suggested that reporters should return their “Noble Prizes” for reporting on Russia. He later deleted the tweet after critics pointed out that Nobel Prizes are not awarded for journalism, and that the prize is named after Alfred Nobel, not the quality of being noble.

Trump later claimed he was being sarcastic with the typo.

Trump was nominated for the 2021 Nobel Peace Prize, which will be awarded at the end of next year.

This year’s Nobel Peace Prize will be awarded on Dec. 10, one month after the U.S. presidential election. There are over 300 nominees for the prize this year.