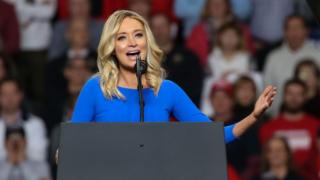 US President Donald Trump has appointed his campaign spokeswoman Kayleigh McEnany to be the next White House Press Secretary.

Ms McEnany, 31, is a seasoned defender of the president, and has made frequent television appearances to promote his policies.

Her predecessor, Stephanie Grisham, did not conduct a single press briefing during her nine-month tenure.

Ms Grisham will return to her previous post as Melania Trump’s chief of staff.

A graduate of Harvard Law School, and former CNN contributor, Ms McEnany has made headlines for her passionate defences of the president.

As the nation grapples with Covid-19, she has come under fire for her early statements on the virus, including suggesting opposition Democrats were “rooting” for the pandemic to “take this President down”.

In a February appearance on a Fox Business show, she said: “We will not see diseases like the coronavirus come here, we will not see terrorism come here, and isn’t that refreshing when contrasting it with the awful presidency of President Obama?”

Ms McEnany has also previously worked as a spokeswoman for the Republican National Committee and in 2018 published a book on the movement behind Mr Trump’s 2016 election win.

Ms McEnany has been criticised for her past support of the “birther” conspiracy theory questioning former President Barack Obama’s birthplace.

On Tuesday, former President Bill Clinton’s press secretary Joe Lockhart shared a 2012 tweet from McEnany where she said Mr Obama’s brother was in “that hut in Kenya”.

I'm sure she'll face a lot of interesting questions if she ever gets to the podium. Have we had an openly racist person like this ever behind that podium? https://t.co/Ze3wpN8KXP

It is unclear whether Ms McEnany will continue to defend the president from behind the press secretary podium, or if she will opt for Ms Grisham’s approach of communicating through tweets and interviews.

The Trump White House is now on its fourth press secretary – as many as Donald Trump’s three predecessors each had during their full eight years in office.

This president operates differently, of course. Over his three and a half years, he’s downgraded the press secretary position, abandoning regular press briefings from his communications office in favour of impromptu gatherings on the White House lawn or, more recently, his daily coronavirus task force appearances.

The arrival of Kayleigh McEnany could indicate the role will again gain some prominence, however. Even if she doesn’t hold her own press briefings, she is likely to continue the sometimes combative television appearances defending the president’s policies for which she has become known.

The move also suggests the line between White House communications and the president’s re-election campaign is further blurring. The president has frequently flouted tradition – and, potentially, federal law – by bringing administration officials onstage at campaign events. Now the press secretary herself comes from straight from the campaign.

In the months ahead, expect the full force of the president’s administration to be aligned toward victory in November.

Ms McEnany is not the only new addition to the White House communications team.

Alyssa Farah, who was the defence department press secretary, will serve as the White House’s director of strategic communications.

Sarah Huckabee Sanders, who filled the press secretary post before Ms Grisham, said on Tuesday that Ms McEnany and Ms Farah were “smart and capable women who have been loyal fighters” for Mr Trump.

“Their promotions are another example of the President empowering strong women to senior roles in his admin,” she said.