Tens of thousands of people protested across the United States and in major world cities for a sixth night as outrage over police brutality intensified over the death of George Floyd.

Floyd, 46, an unarmed black man, died last Monday after a white Minneapolis police officer knelt on his neck as he pleaded “I can’t breathe”, sparking outrage that has swept across a politically and racially divided nation.

In Minneapolis on Sunday, a tanker truck driver drove into a massive crowd of demonstrators. The driver was pulled from his rig and beaten. No protesters appeared to be injured and the driver was later arrested.

“I hate to see my city like this but at the end we need justice,” said 18-year-old Jahvon Craven as he stood on an overpass watching protesters below in downtown Minneapolis.

Protesters in Philadelphia hurled rocks and Molotov cocktails at police, while thieves in more than 20 Californian cities smashed their way into businesses and ran off with as much as they could carry.

Major US cities imposed curfews in fear of another night of demonstrations descending into violence and looting.

In Washington, DC, protesters set fires near the White House, the smoke mixing with billowing clouds of tear gas as police sought to clear them from the area. Sporadic violence broke out in Boston following peaceful protests as activists threw bottles at police officers and lit a police 4WD on fire.

Several hundred demonstrators marched through downtown Miami chanting: “No justice, no peace,” past a detention centre where inmates could be seen in the narrow windows waving shirts.

The Minneapolis Police Department said on Twitter about 150 protesters who remained out after the 8pm curfew were arrested.

Protests spread around the globe with events in London and Berlin on Sunday, and others on Monday including in New Zealand, Australia and the Netherlands.

The closely packed crowds and demonstrators not wearing masks sparked fears of a resurgence of COVID-19, which has killed more than 100,000 Americans.

Demonstrators have flooded streets after weeks of lockdowns during the coronavirus pandemic, which threw millions out of work and hit minority communities especially hard.

Sunday’s protests demonstrated that the arrest of Derek Chauvin, the police officer seen kneeling on Floyd’s neck, failed to satisfy protesters. Three officers who stood by as Floyd died have yet to be charged.

Minnesota Governor Tim Walz said Attorney General Keith Ellison will take the lead in any prosecutions over the death of Floyd. 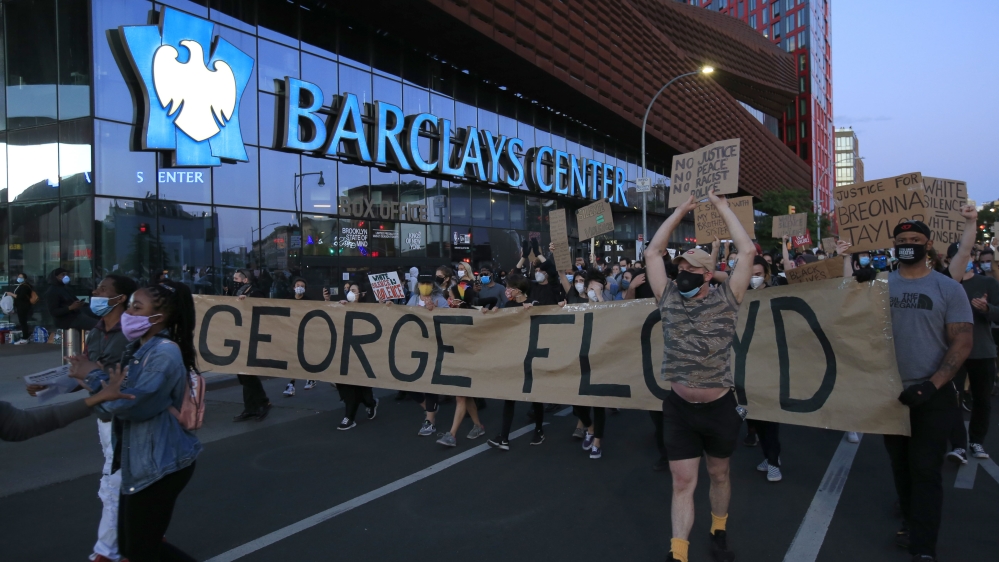 In San Francisco, more than 1,000 people marched through the streets, carrying signs and chanting “George Floyd” and “Black Lives Matter”.

Los Angeles County declared a 6pm curfew to prevent a repeat of the violence that broke out on Saturday night. But fires were lit in Long Beach and National Guard troops were called in.

The county and city of Los Angeles declared states of emergency on Sunday after a night of looting, vandalism and arson that followed mostly peaceful protests.

Philadelphia announced a 6pm curfew and ordered all businesses to close as local news showed images of groups of protesters attacking police cars. Other people went into nearby stores and came out with armfuls of merchandise.

One closely watched protest was outside the state capitol in Minneapolis’ twin city of St Paul, where several thousand people gathered peacefully before marching down a highway.

“We have black sons, black brothers, black friends, we don’t want them to die. We are tired of this happening, this generation is not having it, we are tired of oppression,” said Muna Abdi, a 31-year-old black woman who joined the protest.

In St Paul, state troopers surrounded the state capitol building. About 170 stores in the city have been looted, its mayor said.

In response to the protests, Target Corp announced it was temporarily closing 100 stores, about 30 of them in Minnesota.

The administration of President Donald Trump, who has called protesters “thugs”, will not federalise and take control of the National Guard for now, national security adviser Robert O’Brien said.

The National Guard said on Sunday that 5,000 soldiers and airmen had been activated in 15 states and Washington, DC, but that “state and local law enforcement agencies remain responsible for security”.

A presidential move to federalise National Guard troops is rare, occurring about 12 times since the mid-1900s, mostly during the Civil Rights era of the 1960s, according to the National Guard press office. It was not invoked in protests following the deaths of other Black men in recent years in Ferguson, Missouri, and Baltimore.

Trump said on Sunday the US government would designate anti-fascist group Antifa as a “terrorist” organisation. It was not clear how many of the protesters participating in demonstrations are from Antifa.

“Get tough Democrat Mayors and Governors,” Trump said on Twitter on Sunday afternoon. “These people are ANARCHISTS. Call in our National Guard NOW. The World is watching and laughing at you and Sleepy Joe. Is this what America wants? NO!!!”

“Sleepy Joe” is Trump’s nickname for Democrat Joe Biden, his presumptive rival for the presidency in the November election.

One closely watched protest was outside the state capitol in Minneapolis’ twin city of St Paul, where several thousand people gathered before marching down a highway.

“We have black sons, black brothers, black friends, we don’t want them to die. We are tired of this happening, this generation is not having it, we are tired of oppression,” said Muna Abdi, a 31-year-old black woman who joined the protest.