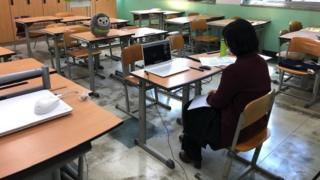 The school bell was chiming as I walked into Miss Ha’s English class. It was a cheery melody to mark the start of a new day, the beginning of a new school year.

But there were no students to heed its call.

Instead, alone in an empty classroom, Miss Ha called out names into her laptop.

“Subin, are you there,” she asks hopefully. Eventually, Subin responds.

“I’ve been spending my vacation social distancing,” the 16-year-old tells her. “And since we’ve still been staying home for the last few weeks, my lifestyle has become more slack and lazy.”

He smiles. He’s being very honest with his new teacher considering this is their first meeting and his first day of high school.

Miss Ha, head of the English department at the Hankuk Academy of Foreign Studies, admitted to me that she was nervous before the class. “Scared even, because I’ve never used this technology before, but it wasn’t as bad as I thought. It can never be like a proper class, but in a situation like this, it’s the best option.”

Downstairs, after her English Culture class, Miss Yoo is more candid. “It’s overwhelming,” she said. “We have to adapt to so much change – it’s so fast it feels like a tsunami.”

For teachers, the technology is one more thing to worry about on top of an already packed set of lesson plans.

For students, the delay and uncertainty over the start of the school year is adding to anxiety about their future.

South Korea has one of the toughest education systems in the world. Students will often study late into the night at special cram schools, especially those who have to sit the notoriously difficult college entrance exam. The Collegiate Scholastic Aptitude Test is a gruelling eight-hour marathon of back-to-back tests which is seen as a pivotal moment in your life in the country.

The Ministry of Education has moved the test date by a few weeks to December, but 18-year-old Choi Yoon-jung is still feeling under pressure.

“I was really happy when the start of school was postponed by a week. It soothed my nerves about my final year. But as the start date got pushed back again and again, it dawned on me – what would happen to our mid-terms and finals? These tests are the final stage to prep for our college entrance exam and what could happen if we can’t take these exams?”

Her friend, Yu Su-ha jumped in with her concerns.

“Yeah, they started talking about substituting some mid-terms with a progress review. Then I was really panicking. I mean our school is notorious for being cut-throat on progress reviews. I was thinking, what if we can’t go to college because of all this?”

This is not what the South Korean government had planned. In fact, this is what health officials had hoped to avoid.

For the last two weeks from the daily briefing room, the Korean Centre for Disease Control had urged the population to adhere to social distancing guidelines. Think of the children and their education, was the message.

But small clusters of Covid-19 infections still crept through the country. An outbreak at a hostess bar in Seoul, more cases confirmed within hospitals near Daegu, infections among those returning from the US and Europe – they all added to the nation’s coronavirus tally .

The start of the school year had already been delayed by five weeks. It could not be put off any longer.

Teaching online was the only way. It will be a disappointment for a government that has been widely praised for its handling of the Covid-19 outbreak. Its aggressive approach to tracing and testing appears to have paid off. But even with all those measures and all that hard work, the risk was still too great to open classrooms.

“Extending the school closure would be the way to evade responsibility and numerous difficulties… but we opted for online classes as this is the second best plan.

“We will aim to make sure remote learning goes well but ultimately we’ll do our best to stabilize the Covid-19 pandemic so our children can go to school.”

Logistically, even in technologically savvy South Korea, enrolling an entire country of children in virtual school has proved a challenge. Luckily, the government already helps out low income families with their internet bills, but there was still the issue of whether pupils had enough smart devices to connect with their teachers.

A roll call was taken; 223,000 pupils said they did not have the tech they needed to start online school, prompting the Ministry of Education to start a lending service.

A number of charities have also helped out donating tablets, portable internet devices and offering their tech know-how. In Seoul, the charity Good Neighbours has stepped in to support thousands of students from low-income families. They’re even handing out food parcels to help students concentrate. For many, school can be a place of stability and a daily home cooked meal.

As he packs another box with noodles and rice, Kim Sun-hong tells me that parents are less worried about access to smart devices and more concerned about their children’s ability to learn without a teacher’s supervision.

“For many low-income, single-parent, or grandparent-children families, the biggest worry is about having to leave their children at home when they have to go to work. We try to help these families by either calling the children by phone to check up on them or by checking in by sending these food packages, and asking if they need any help.”

Others are concerned about long hours in front of a computer.

“Even thinking about watching the monitor for seven hours makes me worried,” said Choi Yoon-jung.

“It really hurts eyes. My younger brother goes to Bae-Jae high school and everything is interactive. Korean, English, Maths, all interactive, all the time. Even PE! He told me his eyes were popping out and hurting as he looking at a small screen while chatting too.”

But Yu Su-ha decides to be more upbeat.

“I would like to tell my fellow third-year high-schoolers that we can concentrate our minds and we can control our anxiety and work at our own pace.

“We can all do this,” she says, ending with the famous Korean rallying call: “Fighting!”

The government admits this is an experiment and there will be trials along the way. They are once again urging the public to maintain social distancing guidelines until 19 April. If the number of new cases of the virus stays below 50 per day, then they may try to open some schools – or at least some classrooms.

In many ways, and I feel guilty writing this, life feels very normal in Seoul. But it is what I would call the “new normal” in this year of Covid-19. Masks are a part of daily life, hand sanitiser is on every corner and every restaurant counter, some are even taped to lampposts. My phone is bombarded daily with emergency alerts warning me to be vigilant and not complacent.

So the school bell will continue to chime through empty hallways. Online classes are as close to normal as the country’s students are going to get, for now. 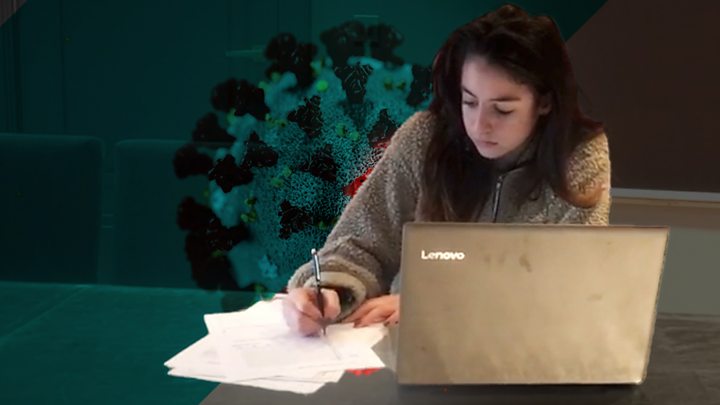