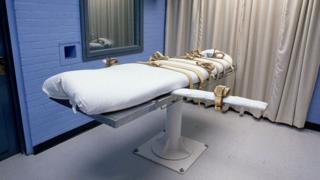 Texas is set to resume executions on Wednesday after a five month hiatus due to the coronavirus pandemic sweeping the state.

On Tuesday, Texas broke its single day record with over 10,000 new infections.

Texas is not the first state to resume executions after suspending them amid virus lockdowns across the country. Missouri executed a prisoner on 19 May.

Since that May execution, no other condemned prisoners in the US have been put to death, according to the Associated Press news agency.

He was originally due to die on 29 April, but the date was pushed back to the pandemic.

Wardlow is due to die by lethal injection on Wednesday evening. His lawyers have filed petitions to the Supreme Court claiming that he was too young at the time of his crime – 18 year-old – to be given a death sentence.

His lawyers argue that developments in neuroscience prove that the human brain continues to develop into a person’s 20s. His lawyers, and a group of scientists, argue that it would have been impossible to determine at the time of Wardlow’s sentencing whether he would ever offend again.

“No technology or methodology available now or at the time of Mr Wardlow’s sentencing makes it possible reliably to predict whether someone who commits a crime at the age of 18 will remain dangerous in the future,” a group of neuroscientists wrote in a letter to the Supreme Court, asking for a lesser sentence.

On Tuesday the Texas Department of Criminal Justice confirmed that 84 prisoners and 9 guards and prison employees have died from Covid-19.

Wardlow’s will be the third execution in Texas this year, and the seventh in the US.

Since 1976, Texas has led the county in executions, according to the Death Penalty Information Center. Texas has put to death more than four times the number of inmates executed by Virginia, the second highest state.

The Covid-19 epidemic had disrupted execution schedules in several US states. However, the US Justice department has said it will resume with carrying out the death penalty for a federal inmate for the first time in 17 years later this month.