Hello and welcome to Al Jazeera’s continuing coverage of the United States elections. This is Joseph Stepansky.

With 15 days until election day. Over 28.7 million US voters have cast their ballot, according to the University of Florida;s US Elections Project.

The number equals 20.7 percent of all votes counted in the 2016 presidential contest.

As of Sunday, the tracker noted that about 5.9 million citizens had cast their ballots in 2016 at a comparable point in the race.

12:00 ET – Trump tells campaign staffers people are tired of hearing from Fauci, ‘and all these idiots’ about coronavirus

Trump has told his campaign staffers that people are tired of hearing from top infectious disease expert, and member of the White House’s coronavirus task force, Dr Anthony Fauci “and all these idiots” about the coronavirus, according to the Associated Press.

Speaking Monday during a phone call with campaign staffers, Trump also  called Fauci a “disaster” but said he’d create bigger issues for himself if he fired the doctor, the news agency reported.

In an interview that aired Sunday on the CBS 60 Minutes programme, Fauci said he was “absolutely not” surprised that Trump contracted the coronavirus, and called a White House Supreme Court nomination a “superspreader event”.

Fauci also noted that the administration has been limiting his media appearance. 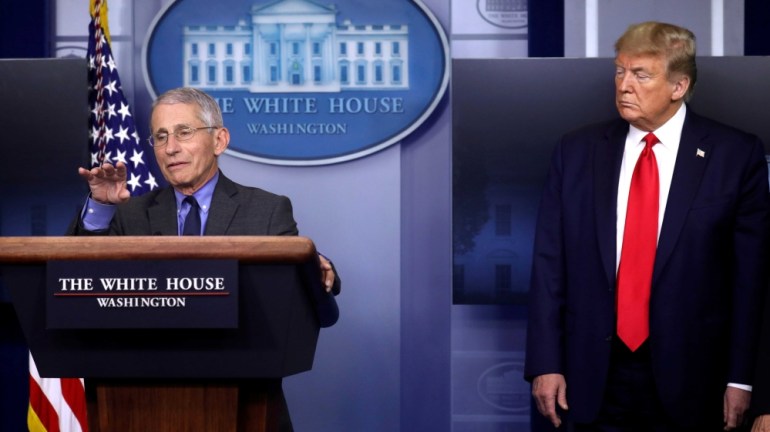 Biden has again tested negative for coronavirus, according to his campaign. The former vice president has been regularly tested during the campaign.

Trump had tested positive for coronavirus on October 2, just days after the candidates faced on in a debate. His doctors have since said he is no longer contagious.

Last week, Biden’s campaign announced that a passenger who had flown with Biden on at least two occasions had tested positive for coronavirus.

That person had been at least 50 feet from Biden and the former vice president had worn a mask during the flight, according to the campaign, who said the candidate’s level exposure did not warrant quarantine. 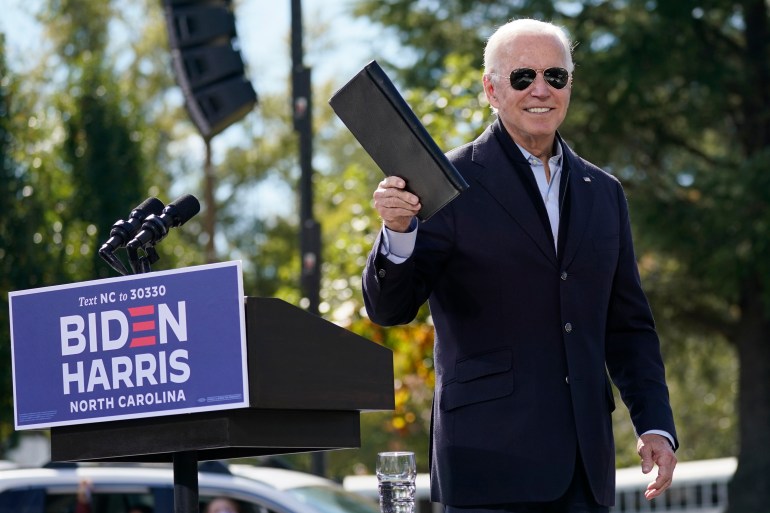 A new Gallup poll has found that 77 percent of registered voters believe the November 3 election matters more than any other previous election, an increase of six percentage point.

That number is the highest since 1996, when Gallup began documenting the trend.

Meanwhile, 2 percent of voters say the election matters less than in the past and 21 percent think it matters about the same.

The Supreme Court on Monday agreed to decide the legality of one of Trump’s hardline immigration policies that has forced tens of thousands of migrants along the southern border to wait in Mexico, rather than entering the US, while their asylum claims are processed.

The justices will hear a Trump administration appeal of a 2019 lower court ruling that found that the policy likely violated federal immigration law. The “remain in Mexico” policy remains in effect because the Supreme Court in March put the lower court’s decision to block it on hold while the legal battle continues.

The Republican president has said the policy, which took effect in January 2019, has reduced the flow of migrants from Central America into the US. Restricting both illegal and legal immigration has been a central theme of Trump’s presidency. He has sought to reduce asylum claims through a series of policy and rule changes.

Florida begins early in-person voting in much of the state on Monday as the Trump campaign tries to cut into an early advantage Democrats have posted in mail-in votes in the key swing state.

With its 29 electoral votes, Florida is crucial to both candidates but considered all-but essential to Trump, who moved his official residence to his Palm Beach estate, Mar-a-Lago, from New York last year. A Florida loss would make it nearly impossible for Trump to reach the 270 electoral votes needed to retain the White House over Biden.

About 2.5 million mail-in ballots have already been cast, with Democrats returning 1.2 million and Republicans about 755,000 as of Sunday, according to The Associated Press news agency. Non-affiliated voters and third-party members make up the rest. The number of mail-in votes is already approaching the 2.7 million cast in 2016. Trump defeated Hillary Clinton in the state by about 113,000 votes.

The Supreme Court has agreed to hear an appeal by the Trump administration of a previous ruling stating the president overstepped his constitutional powers by diverting military funds to pay for his promised wall along the US-Mexico border.

At issue is the legality of the president’s decision, after Congress refused to appropriate money he sought for the wall, to shift other funds already provided by legislators for other purposes.

Trump’s administration appealed a lower court’s June 26 decision that it lacked the authority to shift the military funds towards the border project because the so-called Appropriations Clause of the US Constitution exclusively grants the power of the purse to Congress.

In a Sunday night campaign rally in Nevada, Trump told supporters Biden will “listen to scientists” if elected – a comment apparently meant to disparage the Democratic challenger.

Trump made the comments while warning of more future lockdowns if Biden is elected. Despite a recent spike in hospitalisations and cases in some states, in what public health experts have called a third wave of the virus, the president has continually emphasised the need to move faster with reopenings to support the economy.

In stark contrast, Biden has repeatedly prioritised public health and said he would support future lockdowns if health advisers said they were warranted.

“He’ll listen to the scientists,” Trump told supporters in a mocking tone. “If I listened totally to the scientists, we would right now have a country that would be in a massive depression instead – we’re like a rocket ship. Take a look at the numbers.” 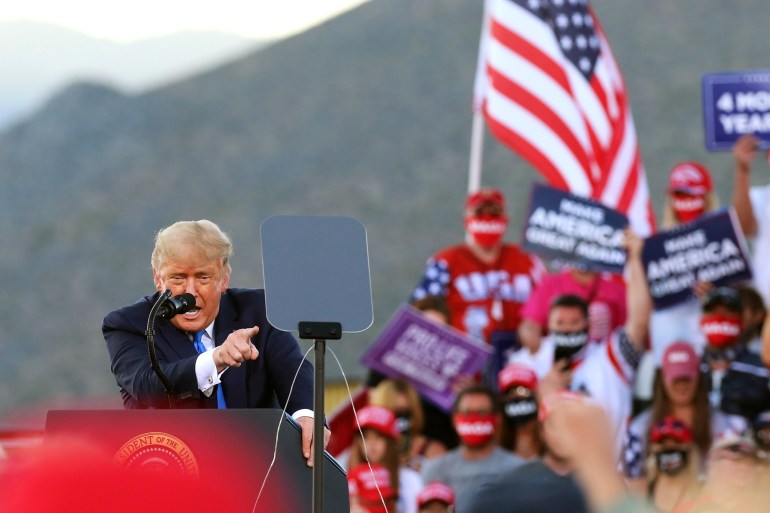 Read all the updates from Friday, (October 13) here.