As resources run dangerously low, further restrictions are being added to the Spanish shutdown. 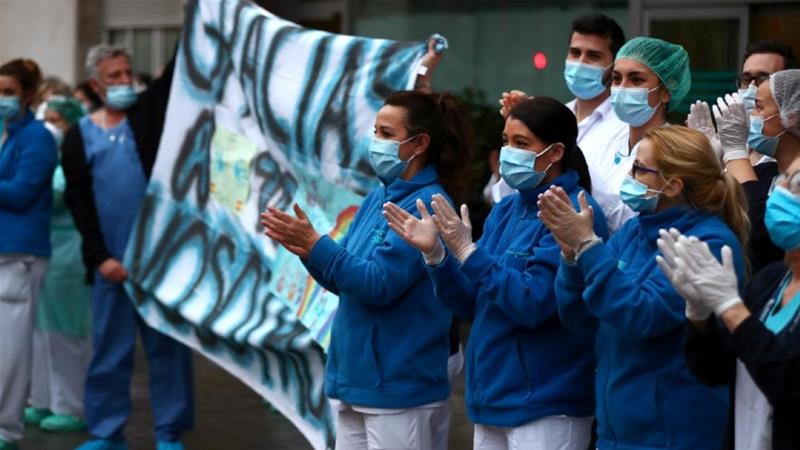 Granada, Spain – Spain’s uphill struggle against coronavirus showed worryingly few signs of easing on Monday, as government officials confirmed 12,298 health workers had now been infected by the virus, and the country’s total number  of cases – 85,195 – is now greater than that of China.

As Spain moves into its third week of lockdown, with further restrictions on non-essential workers set to be enforced on Tuesday, the daily death toll from coronavirus eased slightly compared with 24 hours earlier, down from Sunday’s record total of 838 to 812. Percentage-wise, the increase of recorded new coronavirus cases appears to be dropping a little as well.

But medical resources to combat the pandemic are widely reported as running dangerously low in some areas. On Monday, the Spanish daily El Pais published data indicating hospital intensive care units in eight of Spain’s 17 autonomous regions are already full to overflowing. And there are fears that any let-up in the pace of infections may come too late.

As for the high number of infected health workers, “this is arguably the most alarming news of all”, said Jose Hernandez, assistant professor of sociology and specialist in social health policies at the University of Cordoba.

“It indicates that either they don’t have the sufficient resources to fight it, or the measures to avoid contagions are not sufficiently enforced because the staff are so overloaded with cases,” he told Al Jazeera. “Or, as I fear, both.”

“The health system is getting overwhelmed, and the ratio of staff per patient is far lower than is desirable.”

In what risks becoming a vicious circle, “this will lead to an increasingly precarious health system because the staff working in areas like intensive care are specialised”.

“And if they’re the ones that are most infected, then bringing in foreign medical staff and medical students in their final year” – as has been proposed by Spanish authorities – “sounds like good news”.

“But they’ll need time to adapt to the work here, and that can contribute to a greater shortfall in the service,” says Hernandez.

Unconfirmed reports on Monday suggested conditions for patients and staff in the new 5,000-bed field hospital that opened last week in Madrid’s gigantic IFEMA trade centre were, in some cases, dangerously precarious.

Data also suggests the number of health workers affected by coronavirus already represents around 14 percent of all cases.

That is much higher than in Italy, the European country initially worst hit by coronavirus, but where, as of March 29, official figures showed the number of  infected health workers stood just below nine percent.

Neighbouring Portugal, which has roughly 20 percent of Spain’s population, has 853 infected medical staff. Spain’s current total is more than 12 times that number.

Hernandez warns that, given data is being collected with widely varying criteria in different countries, it is hard to establish real comparisons between, for example, China and the United States. In Europe, he points to Italy as the best reference point for Spain, because “the healthcare system there is very similar, as is health workers’ education, and socially we’re not that different either”.

“In China, too, there seems to be a general acceptance of the confinement measures – whereas here, a certain number of strategies for passive resistance to it are emerging.”

While Spain’s director of emergency health services, Fernando Simon, who has been the public face of the government’s handling of the pandemic so far, himself tested positive for coronavirus, the country is bracing for an intensified state of emergency set to start on Tuesday.

With Spain in lockdown since March 14, Prime Minister Pedro Sanchez announced on Saturday that all non-essential economic services would be suspended for two weeks.

The tougher lockdown, initially planned to begin on Monday, was partially delayed at the last minute to allow businesses more time to prepare, a move that Hernandez argues does little to raise the public’s faith in the government’s planning.

“More than the decision itself, the way it was announced so quickly could make people think that they’re not being fully informed of the real situation. But some may also wonder, if they were largely following government instructions previously, why these new measures have to be taken at all.”