A brutal polar front is predicted to push towards the UK from a northerly direction from this Saturday, according to the latest snow models from WXCHARTS. The maps turn white and purple as snow is shown spreading along eastern parts of the UK, including northern regions such as Aberdeen in Scotland and Newcastle in the northeast of England. London also appears to be affected by snow as the maps also cover the south-east, and the south, including Southampton.

Western parts of the UK may also see a sprinkle of snow from next week as the same map shows Birmingham and Manchester hit with purple swirls.

Scotland could also see ferocious lows of -14C hit later today, which could contribute to the second wave of freezing weather, according to WXCHARTS.

The cold is expected to linger until at least the end of February, with Scotland being hit with sub-zero lows of -5C on Wednesday, February 24.

Northern parts of England are predicted to see brutal low temperatures on the same day, with the charts showing -5C in Carlisle and the Lake District, along with -4C just outside Manchester. 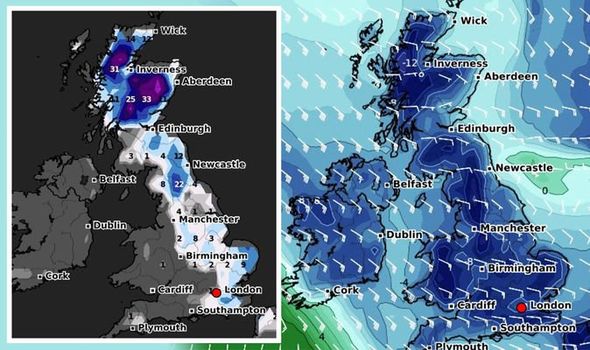 The cold air is shown to push down to the south, with Luton being hit with -1C and Surrey being blasted with -2C on Sunday, February 14.

The BBC’s Weather forecast warned cold patterns from the Arctic could continue to strike the UK in March.

The long-range forecast between Monday, February 22 and Sunday, March 7, said: “High pressure will continue to be the dominant weather system for northern Europe into early March, and this is likely to push cold air back towards the UK later in February, after our brief mild break next week.

“This cold weather is then expected to linger into March, probably until at least the middle of the month. 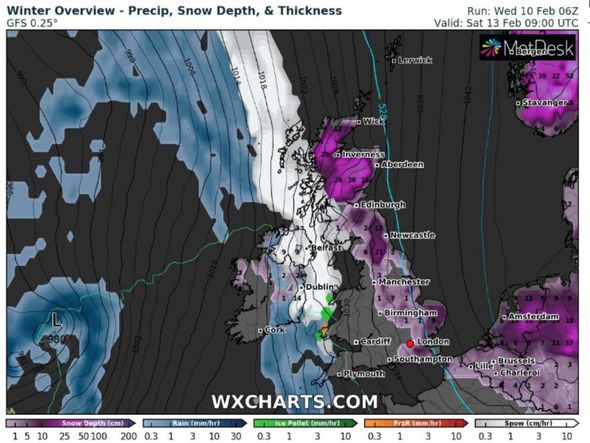 “Towards the end of February and into the first week of March, the forecast becomes trickier to pin down.

“There are a lot of signals from teleconnections (large-scale atmospheric patterns that can influence UK weather from afar) that we may see a return of a colder, drier pattern as high pressure edges back into northern Europe.

“One such pattern is called the Arctic Oscillation, or AO for short, and it is currently strongly negative. This means that there is higher pressure than normal over the Arctic ice cap.

“Historically, when this pattern has occurred in January and early February, it continues to dominate through to early March. 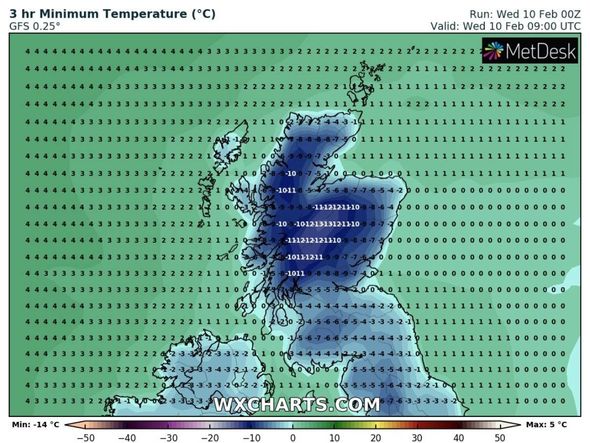 “In short, cold and dry weather is expected to return and persist into March as Arctic high pressure dominates our weather patterns.”

The Met Office’s long-range forecast also warned of snow showers “redeveloping in the east” during March.

The forecast between Wednesday, February 24 and Wednesday, March 10, said: “Into late February there is a signal for higher than average pressure to expand westwards leading to an increased chance of snow showers redeveloping in the east, for conditions in the north to become generally quite settled and for unsettled weather in the south, with disruptive snow possible.

“A similar picture continues into March, though milder conditions in the west look more likely to spread northwards.” 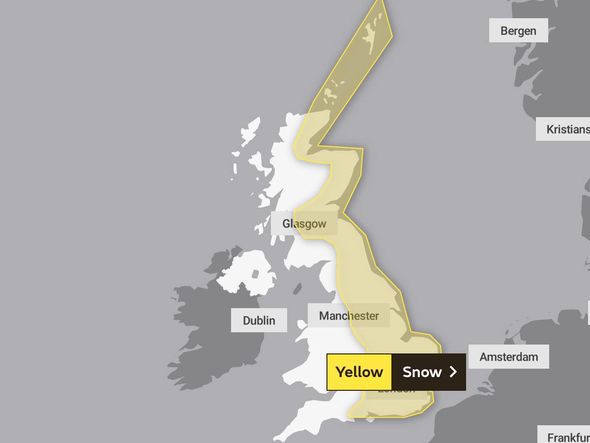 The Met Office has also issued weather warnings for snow and ice that will last from today until Saturday.

The warnings show eastern regions including Newcastle and Norwich being hit with wintry conditions until Friday, with up to 15cm of snow expected to hit.

On Saturday, the weather warnings are then shown in western regions of the UK, including Manchester and Birmingham.

The warning said: “Snow showers will feed off the North Sea into many northern and eastern areas of the UK. Whilst some areas in the warning area will remain largely dry, some persistent bands of showers are likely to develop in places. 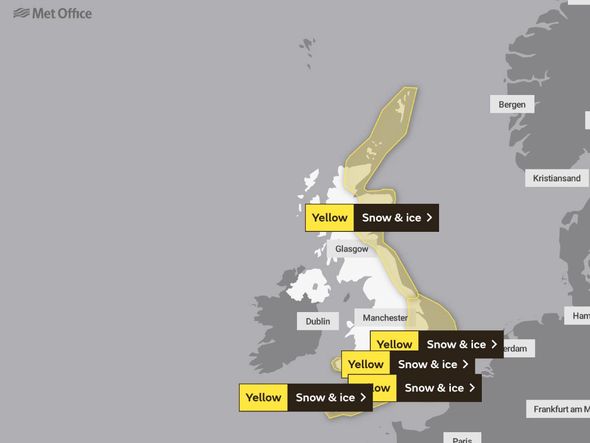 “Daily accumulations of 2-5 cm are probable for some, with 10-15cm plausible in areas where showers merge into more organised and prolonged spells of snow.

“Some icy stretches are possible overnight, mainly where melting snow during the afternoon has not a chance to dry out before freezing overnight, although snow is likely to be more prevalent.”

Netweather added the end of February could see cold conditions strike once again – particularly in the east. 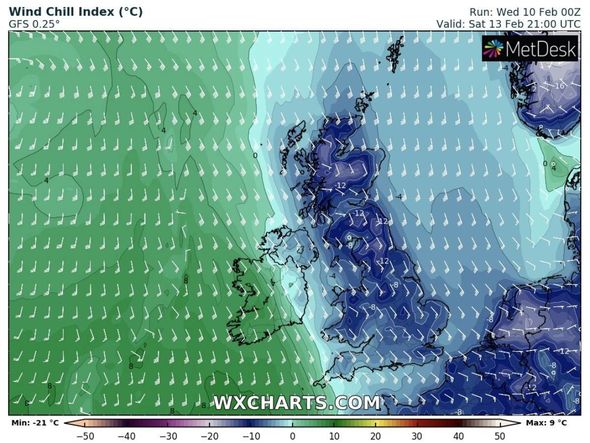 “Probably more cloud making it grey and misty at times. Some showers wintry in places.

“Less cold or milder particularly in the West and South, but colder and perhaps brighter further North and East with more frosts.

“Probably turning more generally colder later, with wintry showers especially in the East. Wetter in West and South, drier in North and East.”