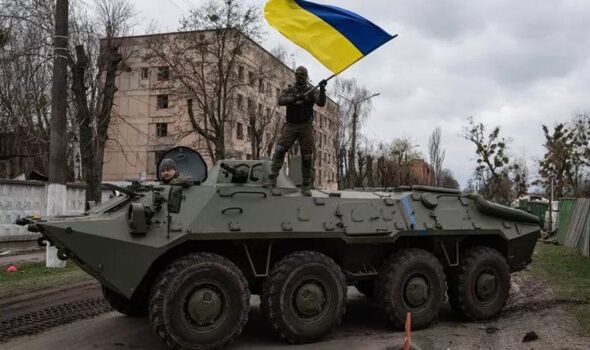 A Russian man, who was planning to defect to the Ukrainian side, was sentenced on Wednesday to four years and eight months in jail, according to the Federal Security Service (FSB). Sergey Ulukshunov, 30, from Krasnoyarsk in Siberia, was sentenced by a regional court, as reported by pro-Kremlin news outlet Kommersant.

Mr Ulukshunov was accused of plotting to join Ukraine’s armed forces and fight against Russia in the ongoing conflict.

The war began when President Vladimir Putin ordered the invasion of Ukraine on February 24, 2022.

The soldier was found guilty of preparing to participate in an armed formation on the territory of a foreign state.

In court documents, he was accused of holding “Nazi views”.

When justifying his attack on Ukraine, Putin said at the time he was seeking to “de-Nazify” the country. There has been no evidence of Nazism to back up this false claim.

Mr Ulukshunov was accused of studying pro-Ukrainian websites in the spring of 2022 and of communicating with the Ukrainians.

According to Kommersant, Mr Ulukshunov was in Minsk on April 3, the capital of Belarus, which borders Ukraine.

He reportedly phoned a representative of the Security Service of Ukraine, who explained to him how to illegally cross the Ukrainian-Belarusian border.

He was subsequently detained on April 8, by Belarusian border guards, who handed him over to the FSB.

Court documents describe him as “an ardent opponent of the domestic and foreign policy of the Russian Federation.”

On Tuesday, a Russian man was detained by the FSB at the Krasnoyarsk airport, accused of attempting to leave Russia to join Ukraine’s armed forces.

Spokespeople for the FSB told Russia’s state-run news agencies Interfax and RIA Novosti that the man is accused of attempted treason.

The security agency added that the man, who is from Abakan in the Russian Federation’s Republic of Khakassia, wanted to join the Ukrainian army to participate in hostilities.

The FSB said he had previously “committed acts of vandalism against administrative buildings” in Khakassia, and had been prosecuted in a vandalism case.

In July Putin signed a law that equates defection to high treason, with a maximum prison sentence of 20 years.