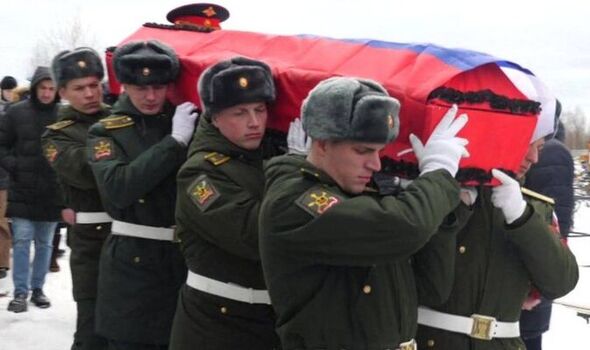 American intelligence said it also estimated some 14,000 to 21,000 Russian soldiers have been wounded in battle or captured so far, pushing the total number of casualties even higher.

If accurate, the figures would mean that around a fifth of the invading force has thus far been incapacitated.

With President Volodymyr Zelensky announcing that four Kremlin generals are now among the dead, the US admitted that its estimate of Russians killed was on the “conservative side”.

But the heavy death toll has reportedly led to low morale among Russian troops, which intelligence officials say has led to instances of soldiers abandoning their vehicles and walking away from the battlefield.

If the American estimate is right, it means that in three weeks, Russia has lost more soldiers in the invasion than the U.S. military lost across 20 years in both Iraq and Afghanistan.

The staggering death toll is also roughly double NATO losses in Afghanistan over two decades of fighting, and roughly equal to US casualties in the 36-day battle of Iwo Jima – one of the bloodiest clashes in the Pacific during the Second World War.

But the Ukrainian authorities put the number of Russian troops killed significantly higher – claiming around 14,000 invading soldiers have died in the conflict so far.

Its own casualties amount to around 4,000 soldiers, but while civilian deaths confirmed by the UN are less than 1.000, this figure is expected to rise substantially when the rubble in various cities is finally investigated.

And in Mariupol alone, some 2,500 civilians are already believed to have been killed.

As the fighting continued across the country yesterday, President Zelensky announced a fourth Kremlin general has been killed in combat.

While he did not name the officer, an adviser to Ukraine’s interior ministry later confirmed it was Maj Gen Oleg Mityaev who had been killed by the defending Azov regiment.

He is the fourth Kremlin general reportedly killed, leading some to ask why such senior members of the Russian military are so close to the front line.

Analysts believe that only around 20 generals are leading Russian operations in Ukraine, meaning that if all the reported deaths are confirmed, one fifth of Russia’s generals have also been killed in action.