As Americans pitch in to order meals for beleaguered health care workers, the deliveries can be a lifeline for restaurants and food trucks as well as hospitals. 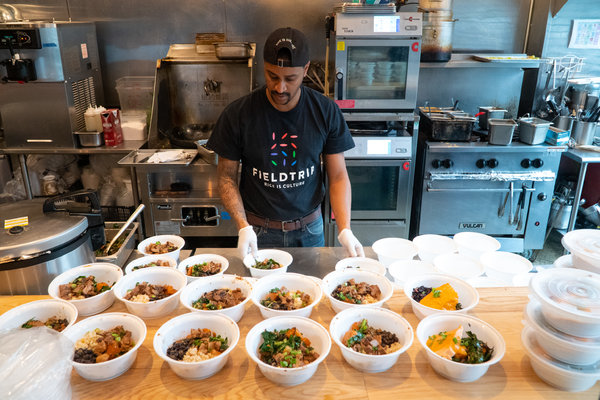 Last week, a large order from a Twitter follower in Maryland gave the Harlem restaurant FieldTrip a crucial shot of revenue and, perhaps, a glimpse of a way to stay in business during the coronavirus pandemic.

FieldTrip’s chef and owner, JJ Johnson, had taken to Twitter on Wednesday to say he had just packed and sent 40 rice bowls, his restaurant’s specialty, to the staff at Harlem Hospital Center. One of New York City’s official coronavirus testing sites, the hospital has been flooded, like so many others in the area, by new and suspected cases.

In his tweet, Mr. Johnson had promised, “Each day will pick a hospital close by @fieldtripharlem to help out.” A few minutes later, the fan in Maryland bought 170 more bowls; Mr. Johnson sent half to Harlem the next day and half to Mount Sinai Hospital on Friday. The order kept FieldTrip busy enough that Mr. Johnson called two of his employees back to join the three others he had brought in earlier in the week as takeout and delivery business began to pick up.

Before New York restaurants were ordered to close their dining rooms on March 15, FieldTrip had employed 10 people. “We’re at five now,” Mr. Johnson said, “which is 50 percent of the way there.”

Five employees. Eighty-five bowls of rice a day. These are small numbers in a country where, as of Monday, hundreds if not thousands of hospitals were treating nearly 142,000 confirmed cases of coronavirus, according to a count by The New York Times.

What has happened at Fieldtrip, though, is playing out at restaurants and hospitals around the country. Delivery orders for health care workers have begun coming in, ranging in ambition from bags of sandwiches paid for by small pledges on GoFundMe pages to multicourse meals subsidized by the philanthropic arms of major companies.

Chefs say they are grateful for these new delivery routes. So are hospital administrators, who say their employees have been too busy to run out for coffee or even to place delivery orders.

Neither group foresaw this surge in food donations two weeks ago, when it was still possible to believe that closing restaurant dining rooms might be enough to keep new coronavirus patients from overwhelming hospitals.

That was before doctors began learning how to keep two patients alive on a single ventilator, before the Centers for Disease Control and Prevention advised health care workers who had run out of N95 masks that they might tie bandannas and scarves around their heads “as a last resort,” before nurses were cutting arm holes in plastic trash bags and wearing them instead of standard protective gear.