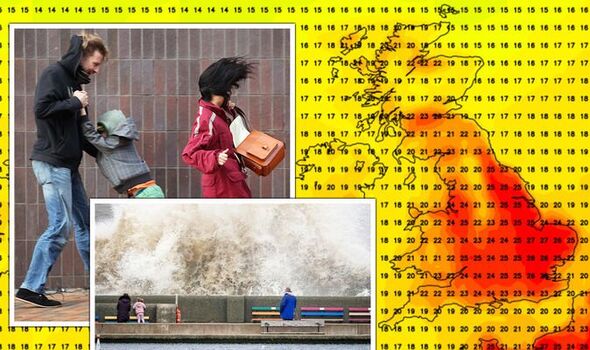 Temperatures across southern, eastern and central Britain during the start of this week will rocket into the high-20Cs. But waiting in the wings is a conveyor belt of storms, threatening torrential downpours, wind and thunderstorms.

The remains of Hurricane Danielle, currently churning the Atlantic, will sweep towards Britain to fuel the assault.

The dramatic U-turn after weeks of dry, settled conditions has been largely driven by low pressure steered in by the jet stream.

Met Office meteorologist Alex Deakin said: “The jet stream has been up to the north for much of the summer in a wavy amplified pattern.

“But this weekend an arm of the jet stream drives southwards and forms a trough, and within there you get low pressure circulating around, and it looks like sticking around well into next week.

“That is why we are seeing a shift in our weather pattern. 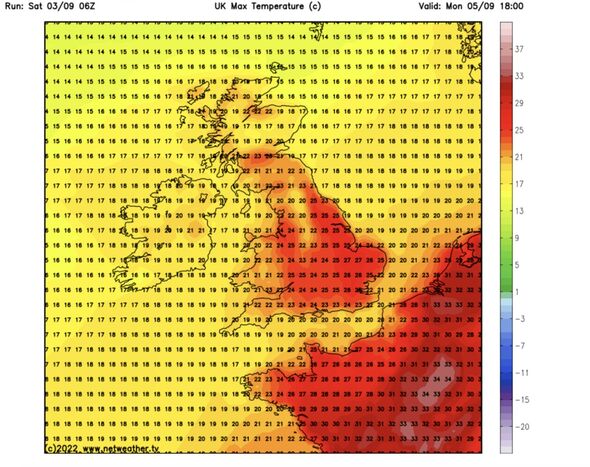 “Some places will see some heavy and persistent rain, and this is something to keep our eyes on as some places are going to get a real soaking.

Forecasters agree the storm season will ‘get going’ this week as low-pressure systems bulldoze in from the Atlantic.

An atmospheric ‘balancing effect’ will stir unsettled, wetter weather to readjust after the dry summer, according to some experts.

Jim Dale, meteorologist for British Weather Services, said: “I am a big believer of the balancing effect, and we are not going to get away with the summer we have had without a big swing in the weather during the autumn.

“This is what we are going to see through the next week when things will really start to get going.” 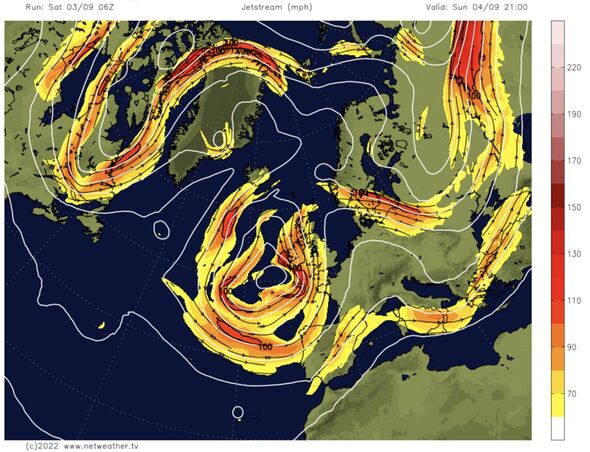 In the meantime, parts of the country will swelter in highs more normal for mid-summer than early autumn.

Eastern Britain will hit 27C on Monday while southern regions hover between 23C and 26C, and Scotland and northern England reach the high-teens and low-20Cs.

Tuesday will be cooler, although temperatures will remain above average with eastern Britain lifting into the low-20Cs.

John Hammond, meteorologist for Weathertrending, said: “Low pressure will take up residence just to the west of the UK.

“Bands of cloud and rain, spiralling around the centre of this depression, will bring a healthy amount of rain to most places.

“Further east across the UK, there will still be some lengthier dry spells, and with winds drawn up from a southerly quarter, it will be warm in the sunshine, and the nights will be mild.” 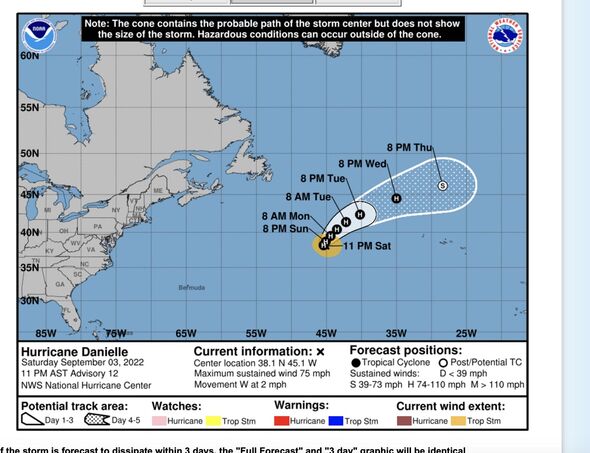 The weather will turn later this week as the remnants of Danielle spiral towards Britain, he warned.

He said: “After midweek, low pressure looks set to edge across the UK, bringing heavier downpours more widely, before easing.

“Attention then turns to at least one slow-moving hurricane out in mid-Atlantic.

“There are big question marks about whether such a storm remnant may be catapulted in our direction next weekend.”

Exacta Weather forecaster James Madden added: “The first weekend in September will bring more of a changeable theme with the risk of a thundery breakdown.

“There is still an opportunity for some potentially warm to hot weather at times for a number of days.”

The Met Office warned showers will pick up this morning before parts of the country see sunshine this afternoon.

Mr Deakin said: “Rain could turn heavy as we head into Sunday, but it will be a bit brighter on Sunday afternoon.

“Across eastern parts of England showers will be few and far between, although there could be some heavy showers.”