Bodies of the last female white giraffe and her calf were found by locals in eastern Kenya. 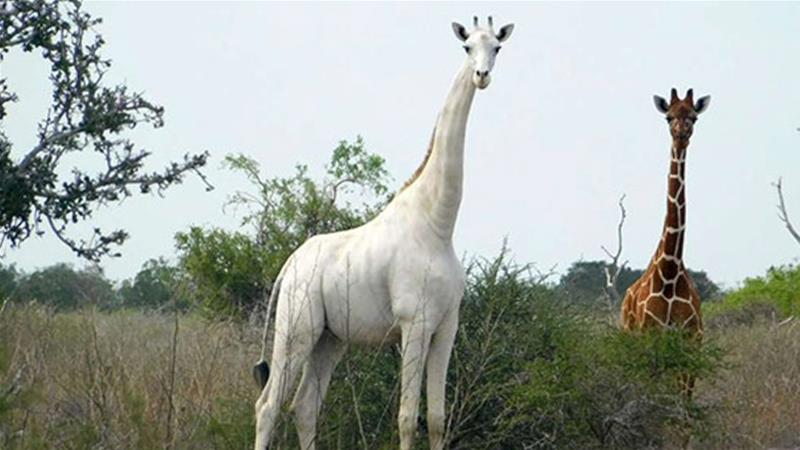 Kenya’s only female white giraffe and her calf have been killed by poachers, in a major blow for the rare animals found nowhere else in the world, conservationists said.

The bodies of the two giraffes were found by locals “in a skeletal state after being killed by armed poachers” in Garissa in eastern Kenya, the Hirola Community Conservancy said in a statement on Tuesday.

We mourn the loss of Kenya’s rare white giraffes.#PressRelease pic.twitter.com/Cu3PjQisqy

The conservancy added that the their deaths leave just one remaining white giraffe alive.

The poachers have not yet been identified by authorities. Animal rights activists had last spotted the mother and calf about a month ago.

The white giraffe was discovered in 2017 by the Hirola Conservation Program. The conservancy explained the rare animals had a condition called leucism, resulting in the partial loss of the giraffes’ pigmentation.

So, someone/poachers killed the only rare white giraffes in Kenya? A mother giraffe and her calf! What’s wrong with some human beings🤦🏾‍♀️😭

The last remaining white giraffe is a lone male, born to the same slaughtered female, the conservancy added.

“We are the only community in the world who are custodians of the white giraffe,” said Mohammed Ahmednoor, manager of the conservancy.

“The killing is a blow to tremendous steps taken by the community to conserve rare and unique species, and a wakeup call for continued support to conservation efforts.”

The Rare white 🦒 in Garisa county are no more. Heartless people with no knowledge on the Importance of conservancy killed these dazzling cute Giraffes. A set back on the kenyan Wild Life heritage. pic.twitter.com/kkOvtYEW7k