Home » World News » Rakhine: Where the military is more feared than the coronavirus

People in Myanmar’s troubled western state are battling a surge in coronavirus in the midst of escalating conflict. 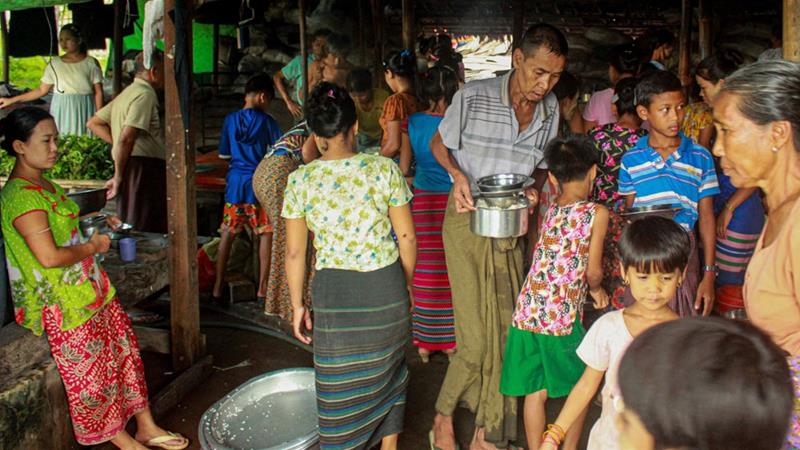 This article was supported by the Pulitzer Center.

Yangon, Myanmar – On the night of September 3, Thar Hla* was restless, and it was not just because he was sharing a concrete floor with approximately 70 people. “After hearing loud firing, I felt like the quarantine centre wasn’t safe,” the 32-year-old told Al Jazeera by phone from his hometown in Kyauktaw in Myanmar’s western Rakhine State. “That night, no one could sleep.”

In the morning, even though some had still to get their coronavirus test results, they all left.

“Everyone in the quarantine centre went home,” Thar Hla said.

Nearby, local villagers counted the cost of the night’s violence.

U Yet Thee,* from one of the two villages that had been attacked, told Al Jazeera that nearly everyone from his village – less than three miles (4.8 kilometres) from the quarantine centre – fled. “The Tatmadaw [Myanmar’s military] fired indiscriminately around our village. Then, they burned our houses and we ran in different directions. We didn’t know where to go to save our lives,” he said.

Local media reported that 166 houses in the two villages had been razed, and two men shot dead. Some 8,000 villagers had fled their homes, according to Development Media Group, a Rakhine-based media organisation. Al Jazeera was unable to independently verify the details.

As Myanmar grapples with its worst coronavirus outbreak since the start of the pandemic, the three million people of Rakhine are facing not only a pandemic, but an intensifying conflict between the military – known as the Tatmadaw – and the Arakan Army (AA), an ethnic armed group.

While villagers have blamed the armed forces for the September 3 violence, a Tatmadaw spokesperson denied the allegations during a press conference the following day, instead accusing the AA of attacking a military vehicle.

One of numerous ethnic armed groups in Myanmar, the AA wants self-determination for the people of Rakhine State, and derives most of its support from the ethnic Rakhine. Conflict between the AA and Tatmadaw, which began escalating in late 2018, has displaced around 200,000 people, according to the Rakhine Ethnics Congress, and has spilled over into neighbouring Chin State.

The recent conflict is the latest in a state with a troubled history.

Myanmar’s 2014 census data on ethnicity was never released due to political sensitivities. In addition to the Rakhine, a mostly Buddhist population that is commonly seen as making up the largest ethnic group in the state, the mostly Muslim Rohingya have a long history there, too, but have faced progressively systematic discrimination as well as the denial of citizenship and other rights.

Sectarian violence in 2012 left 130,000 mostly Rohingya segregated into camps near Sittwe, the capital of Rakhine State, where they remain. Five years later, Rakhine was also the site of a brutal military campaign of violence against the Rohingya, which led to an exodus of 730,000 people across the border to Bangladesh that United Nations investigators say was carried out with genocidal intent.

Myanmar reported its first case of local coronavirus transmission in a month on August 16, in Sittwe. At the time, the country had recorded less than 400 COVID-19 cases nationwide and Rakhine less than 20.

By September 13, the number of cases in Rakhine State had reached 735, spanning all 17 townships, nearly a quarter of the country’s 2,932 cases, according to the Ministry of Health and Sports.

A partial lockdown has been in force across Rakhine since August 26, and State Counsellor Aung San Suu Kyi has called for a “union spirit” to fight the outbreak in the state, promising sufficient food and necessary financial assistance for an effective response.

But the government continues to block 3G and 4G networks in eight townships in Rakhine and Chin for what it says are reasons of security and has imposed limits on humanitarian access to conflict-affected areas despite concerns about the impact on efforts to curb the spread of coronavirus.

Al Jazeera contacted both a government and Ministry of Health and Sports spokesperson by phone, but did not receive a reply.

Nearly 82,000 people were forced from their homes by the fighting between March 16 and July 6, according to government figures, while Development Media Group reported that nearly 19,000 people from more than 10 villages in Kyauktaw township fled their homes between August 31 and September 4.

In addition to the violence on September 3, artillery fire allegedly injured civilians in two villages on September 2 and 3. 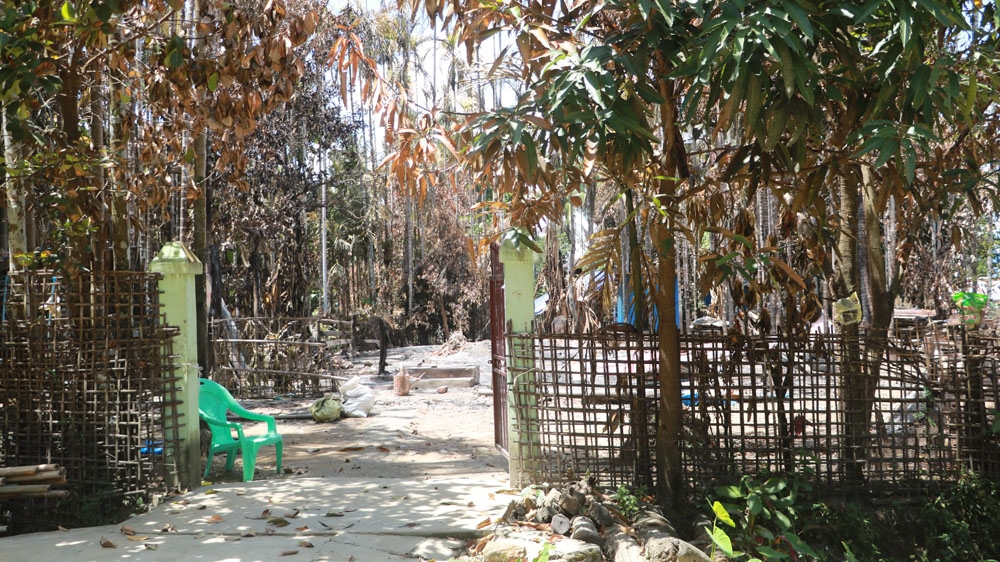 Kyauktaw township is just one site of conflict-related violence in the state. On September 8, at least four civilians including two children were killed by artillery fire between the townships of Ann and Myebon.

Valijon Ranoev, head of the Reporting and Public Information Unit at the UN Office for the Coordination of Humanitarian Affairs (OCHA) Myanmar, told Al Jazeera that civilian casualties and those displaced this month are a “stark reminder of the unacceptable risks people in Rakhine face”.

UN Secretary-General Antonio Guterres appealed for a global ceasefire on March 23, and numerous groups have since called for an end to the fighting in Rakhine. Yet the Tatmadaw has rejected three ceasefire offers from the AA, and excluded areas where the AA operates from a nationwide ceasefire announced in May and since extended until the end of September. Last month, the government excluded the AA, which it has designated a “terrorist organisation” since March, from national-level peace talks.

“In addition to [the] direct humanitarian impact and human toll, the hostilities continue to impact our ability to deliver assistance, with most of our humanitarian partners facing challenges to access communities,” OCHA’s Ranoev told Al Jazeera. “The insecurity, combined with the recently introduced COVID-19 preventive measures, have curtailed our efforts to continue and scale up [the] humanitarian and COVID-19 response.”

The conflict also poses risks to those involved in the pandemic response.

In April, a vehicle transporting swab samples came under fire, killing the driver, even though it was clearly marked with the World Health Organization’s logo. Neither the AA nor Tatmadaw have claimed responsibility. The driver was one of 289 civilians killed by conflict in Rakhine between December 1, 2018 and September 8 of this year, according to Radio Free Asia. 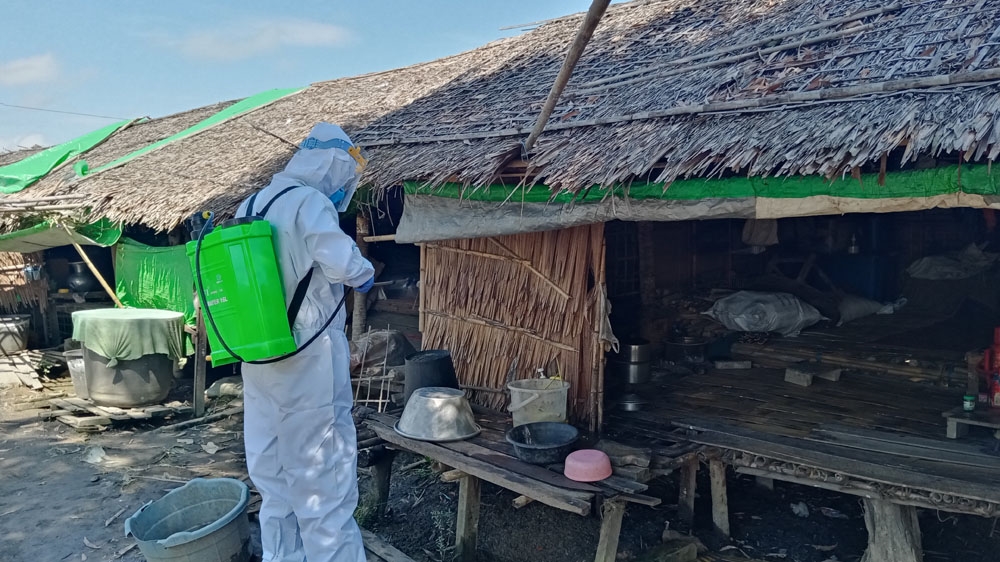 Thar Hla returned home from Yangon on August 21 and – as the law required – was sent to a community quarantine facility for three weeks.

It was here that he found himself sharing floor space in the town’s football club with men, women and children who had returned to Rakhine from elsewhere in Myanmar. The centre also served as a one-night transit hub, he says, for those travelling within the state. Maintaining social distance was impossible.

After fleeing the centre on the morning of September 4, Thar Hla and the other quarantined people returned the same evening, but two days later the quarantine manager, who is also a local administrator, closed the facility because of the conflict and residents were advised to quarantine at home.

The next day, swab tests for nine people came back positive for the coronavirus, but only six immediately reported to the township’s main hospital, its superintendent told local media.

Thar Hla, who tested negative, is now self-quarantining at home. But for those displaced by the recent attacks, social distancing is not an option, while food scarcity remains an increasing concern as local communities struggle to accommodate new arrivals.

U Yet Thee told Al Jazeera that coronavirus was far from his mind.

* Pseudonyms have been used for Thar Hla and U Yet Thee to protect their safety. 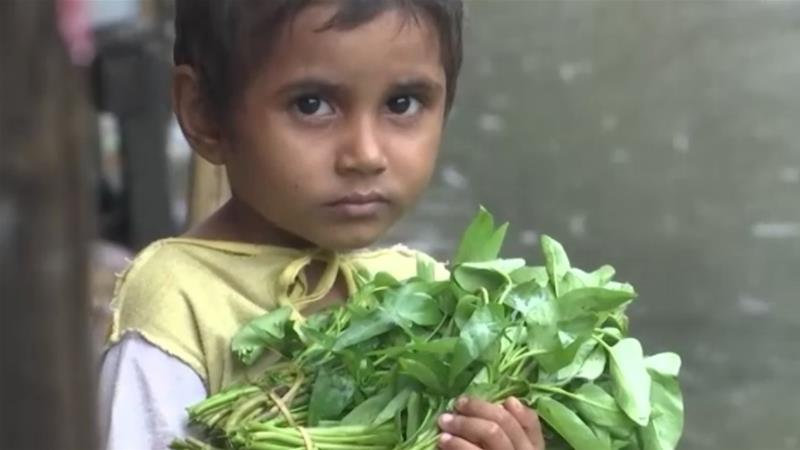