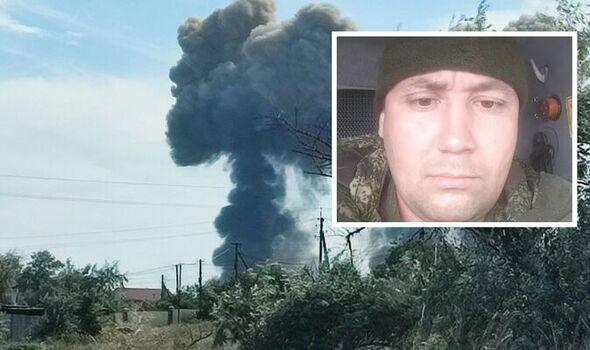 Lieutenant-Colonel Vitaly Tsikul, 36, who was also a tank commander, has become the latest senior Russian casualty during the war in Ukraine. Russian media has showed footage of his funeral taking place in the town of Chebarkul, central Russia. Tsikul served in the Russian 90th Tank Division, and was accorded full military honours at his funeral. No details have been revealed about the circumstances behind his death in Ukraine.

Viktor, a soldier at the funeral, said: “He was our commander.

“I did not hear a single bad word from him. He was an officer who rallied his troops.”

This comes as one person was killed when a Russian air base near seaside resorts in the annexed Crimean peninsula was rocked by explosions.

Witnesses heard at least 12 explosions at around 3.20pm local time on Tuesday rom the Saky air base near Novofedorivka, which in February was used by Russia as one of the launchpads for its invasion.

It maintained no attack had taken place and no aviation equipment had been damaged.

He said: “Of course not. What do we have to do with this?”

The presidential adviser suggested the blast could be down to Russian incompetence or an attack by partisans.

An anonymous military source was quoted as telling Russian news agencies: “There are no signs, evidence or, even less, facts (to indicate) a deliberate impact on ammunition stores.”

President Zelensky stopped short of mentioning the blast in his regular evening address video to the country.

Reiterating Kyiv’s position that Crimea would have to be returned to Ukraine, he said: “The Black Sea region cannot be safe while Crimea is occupied.”