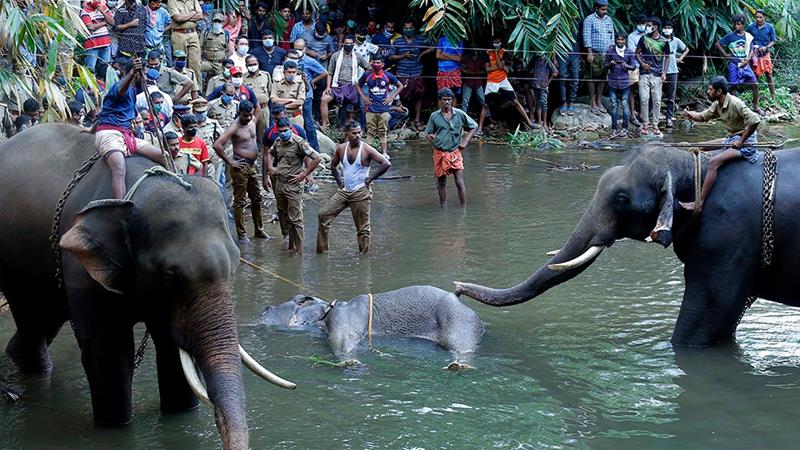 An elephant’s death in the southern Indian state of Kerala has erupted into a political controversy, with the state’s chief minister flagging a “hate campaign” over the incident by the Hindu right-wing forces.

The wild elephant, aged about 15, allegedly ate a pineapple filled with firecrackers that exploded in its mouth, leaving it in searing pain as it walked around the village for days, according to media reports.

The animal eventually died standing in a river on May 27 near the Silent Valley National Park in Kerala’s Palakkad district, prompting shock and anger across the nation over the cruel death.

An autopsy undertaken by forestry officials found it had major wounds in its mouth consistent with an explosion, said a report by the India Today network.

Kerala Chief Minister Pinarayi Vijayan on Thursday tweeted that three suspects have been identified, and that the case will be jointly investigated by the state’s police and forest departments.

“Justice will prevail,” he posted. The perpetrators could face animal cruelty charges that could bring fines or a jail term.

“It’s murder. Malappuram is famous for such incidents, it’s India’s most violent district,” she told the ANI news agency on Wednesday.

“For instance, they throw poison on roads so that 300-400 birds and dogs die at one time,” she said, without elaborating who she meant by “they”.

The statement by the senior BJP leader triggered a storm of anger on social media, with hundreds of posts suggesting the perpetrator could be a Muslim.

That, despite many journalists – and even actors – from the region tweeting that the elephant died in Palakkad and not Malappuram as alleged by the BJP and its supporters, and asking people not to communalise the incident.

“Seeing all the hatred on the pregnant elephant’s killing in Kerala, need to add something. The elephant was found dead in the Velliyar river which flows through Palakkad district,” wrote Dhanya Rajendran, editor-in-chief of southern India-based The News Minute website, on Twitter.

In a tweet on Thursday morning, Union Minister Prakash Javadekar repeated Maneka Gandhi’s statement that the killing happened “in Malappuram, Kerala” and the central government has taken a “very serious note” of it.

“We will not leave any stone unturned to investigate properly and nab the culprit(s). This is not an Indian culture to feed firecrackers and kill,” he posted.

In response, Chief Minister Vijayan said some people have “tried to import bigotry into the narrative” of the elephant’s death.

“[We] are saddened by the fact some have used this tragedy to unleash a hate campaign. Lies built upon inaccurate descriptions and half truths were employed to obliterate the truth,” he tweeted.

The state of Kerala is governed by the opposition Communist Party of India (Marxist). One of the parliamentarians from the state is Rahul Gandhi, former president of the main opposition Congress party.

The elephant’s death came to India’s attention after a forestry officer, Mohan Krishnan, posted an emotional apology to her on May 30.

“Sorry sister,” Krishnan, who witnessed the elephant’s death, wrote in the Malayalam language in a Facebook post, which received almost 10,000 reactions or comments.

“With her mouth and tongue destroyed in the explosion, she paced around hungry without being able to eat. She must have been more worried about the health of the child inside her than about her own hunger.”

Photos of the pachyderm shared on social media showed it standing in a river after the incident, dunking its mouth and trunk in the water hours before it died.

India’s cricket captain Virat Kohli said he was “appalled” while Bollywood actor Akshay Kumar tweeted that the incident was “heartbreaking, inhumane and unacceptable”.

Ratan Tata, chairman emeritus of Tata, one of India’s biggest conglomerates, called the killing “no different than acts of meditated murder against other humans … Justice needs to prevail.”

Poor villagers in India, Sri Lanka and elsewhere often use firecracker or explosive-filled pineapples – which act like pressure-activated landmines – to protect their fields and homes from wild animals.

A similar incident was reported last month in a nearby district in Kerala where a female elephant was found with serious mouth injuries.

About 2,361 people were killed in attacks by elephants between 2014 and 2019, according to data recorded by the Indian government.

In the same period, about 510 elephants died, including 333 from electrocution and about another 100 from poaching and poisoning, the figures stated.