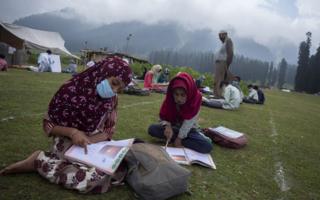 Schools across India are struggling to teach online as the pandemic forces them to stay shut. But this town in Indian-administered Kashmir has found a novel solution, reports Abid Bhatt.

Every morning, students in Doodpathri, a town in Budgam district, walk past streams and bridges, and up the hill to their new classroom: a picturesque spot with the snow-capped Himalayas as a backdrop.

The outdoor school is a breather for both parents and children after months of a grinding lockdown to slow down Covid-19 infections. The state has reported more than 19,000 cases and some 365 deaths.

“It’s far better that our kids attend such schools than grow weary in homes where they often end up frustrating themselves,” says Mushtaq Ahmad, whose son is attending the open air school.

Officials should collaborate with locals to set up more such schools, he adds. 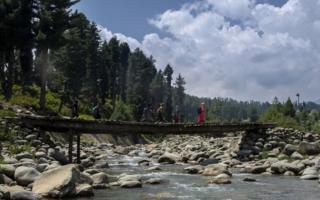 Despite Kashmir’s troubled relationship with India – and the spectre of violence that haunts the valley – it has long been a popular tourist destination for its idyllic beauty.

And Doodpathri itself is a well-known hill station. But with no tourists arriving this summer, locals asked officials to put the area’s stunning locales to different use. 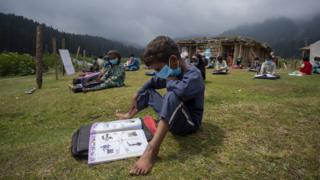 “The classes are being conducted keeping the safety measures in mind,” said Mohammad Ramzan Wani, zonal education officer, who helped set up the community school.

“Due to unpredictable weather in upper reaches, we also tried to pitch tents for seamless execution of these classes.” 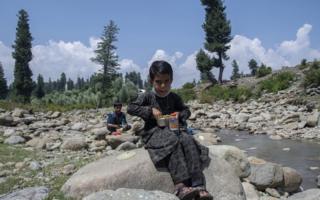 Indian students, especially those in rural areas and poorly funded government schools, have struggled to attend classes online due to spotty connectivity and shortage of phones in a single household.

Even in private schools, the move to online classes has exposed a digital divide between students who have multiple devices – from laptops to iPads to smartphones – at home and those that don’t.

So in rural Kashmir, the option of open air classrooms was a welcome respite. 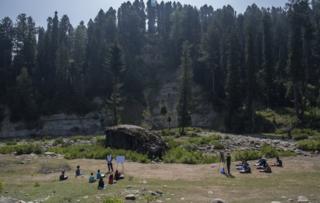 “Their eager participation has made the entire concept click and created the similar demand elsewhere,” the teacher adds.

The move has been particularly helpful since children here had been out of school even before the pandemic began.

In August 2019, India’s federal government revoked the region’s special status, which gave it more autonomy than most other states, creating a further rift between Delhi and Srinagar. The move came with an unprecedented lockdown and suspension of phone and internet services. While the latter have been restored to some extent, high-speed or 4G internet is still banned.

Life in the Muslim-majority valley hasn’t been normal for the past year. 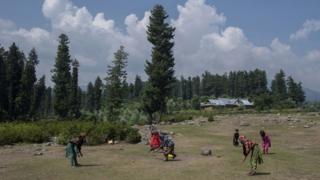 Officials say the open-air schools are following all protocols related to Covid-19, such as wearing of masks and social distancing.

Teachers say authorities regularly show up for inspections, and ensure that whatever is needed for the classes is available.

The only disadvantage is that they have no way of sheltering from the rain.

When the clouds overhead burst, the children run for shelter, the sounds of the summer shower interrupted only by their giggles and screams.

All photographs by Abid Bhatt.