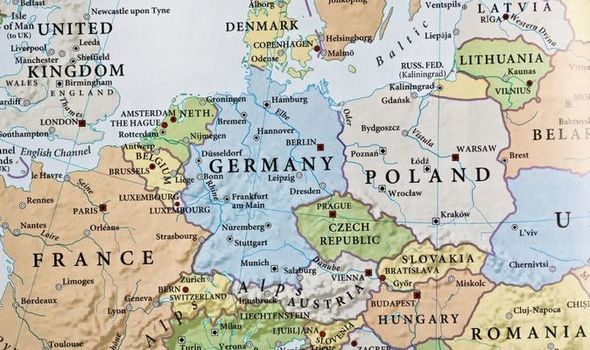 Although both world wars are studied in schools, 32 per cent of 6,500 people surveyed could not pick out Germany – known as Europe’s biggest economy.

The study asked participants to pinpoint 196 countries from all over the globe.

Almost two thirds (62 per cent) could not find Japan while 73 per cent drew a blank with Ukraine, Europe’s largest country.

Australia outfoxed 45 per cent of those asked and even holiday favourite Spain was a mystery location for one in four.

The research also found that 29 per cent failed to place Poland on a map.Almost 900,000 Polish-born people live in the UK, the largest group of migrants.

Around the same (28 per cent) were defeated when asked to spot France, our closest continental neighbour, in the study by training provider The Knowledge Academy.

Even the world’s largest country Russia was unidentifiable for more than a fifth.

Less well-known countries proved the most difficult for participants to find.

The biggest mystery was Indonesia: some 83 per cent were clueless about its location.

Vietnam bamboozled 81 per cent, despite it being the subject of many blockbuster films and being visited by more than 300,000 Britons every year.

A spokesman for The Knowledge Academy said: “We quizzed 6,500 people’s knowledge to see which countries we struggle to place on a map the most.

“Indonesia topped the list of countries people cannot identify on a map, with 83 per cent having no idea.