Home » World News » Once Obscured in the U.S., Lao Cooks Share and Celebrate Their Cuisine

At times spicy and bitter, salty and pungent, herbaceous and sour — Lao food is intensely delicious.

Thum mak hoong, or papaya salad, is a fundamental dish in Lao cuisine, with as many variations as there are cooks.Credit…Damon Casarez for The New York Times

LOS ANGELES — Ava Phengsy is a Lao home cook, but I also think of her as an artist.

Her medium is Instagram, and the subject of her obsession is thum mak hoong — Lao papaya salad — a synthesis of many precise flavors including concentrated black crab paste, intensely sour roasted hog plum and the powerfully fishy, unfiltered fermentation known as padeak.

Ms. Phengsy, who lives in the South Bay area, isn’t exaggerating, and her devotion to Lao flavors, which she thinks have been unappreciated outside her community for too long, is fierce.

In one clip, she might call your attention to the smell that lingers on her fingers after mixing the thick, treacle-dark dressing. In another, she’ll focus on the music of the dish: the rhythmic scrape of a metal spoon against the mortar, followed by the juicy thump of the pestle.

Thum mak hoong is Ms. Phengsy’s everyday comfort food, her five-minute meal, her anytime snack. She learned to make it from her mother, and has been doing so every other day for the last 20 years.

“Thum is adored and loved,” she said. “But a lot of people don’t know it’s a Lao dish.”

Most Americans learned about papaya salad in Thai restaurants, in part because Thai restaurants have always been more plentiful in the United States. Thailand, Laos’s wealthier neighbor, even invested in culinary diplomacy beginning in the 2000s, lending Thai businesses money to open more restaurants internationally.

In his excellent 2019 cookbook, “Hawker Fare,” the Bay Area chef James Syhabout writes about how his Lao mother worked in a Thai restaurant when she arrived in the United States. Later, she opened her own Thai restaurant.

Why not a Lao restaurant? For many Lao immigrants establishing a new business in a new country, the worry was that a Lao menu would be too obscure for American diners — too bitter, too spicy, too fishy, too salty. In short, too risky.

Because it wasn’t just the food culture of Laos, but everything about the country, that was unfamiliar to most Americans. This, despite the deep involvement of the United States there during the Vietnam War — the American military dropped two million tons of bombs on Laos beginning in the late 1960s, and illegally sprayed more than 600,000 gallons of poisonous herbicide into its fields.

Thousands of families fled then, during the Lao Civil War, and after it when a Communist government came to power. Many escaped by crossing the Mekong River, arriving at refugee camps in Thailand and other parts of Southeast Asia. They both revised and preserved their foodways in these in-between spaces, within Lao immigrant communities, around Lao Buddhist temples and at home.

For decades, Lao cuisine in the United States has been almost hidden from outsiders, but that’s changing as more and more cooks share their food at markets and in restaurants, at pop-ups and events, on Instagram reels and in YouTube tutorials. 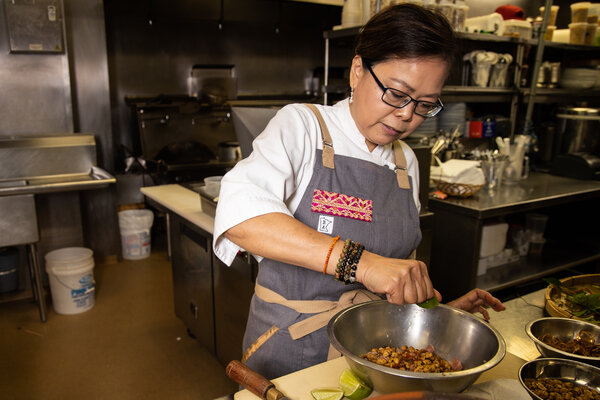 Cooks like Ms. Phengsy say they’ve been inspired to speak a bit louder about their food thanks to Seng Luangrath, the chef and restaurateur behind Thip Khao, in Washington D.C. Ms. Luangrath learned to cook in the early 1980s from her elders at the Nakhon Phanom refugee camp in Thailand. In 2010, she took over her first restaurant, Bangkok Golden, training staff to tell diners about the “secret” Lao menu.

“At first, I didn’t have the courage to do full-blown Lao food,” said Ms. Luangrath. But later, she added Lao dishes to the menu and renamed her restaurant Padeak, after the chunky Lao fish sauce.

Saeng Douangdara is a private chef and cooking instructor in Los Angeles who makes delightful, often cheeky cooking videos. In a more earnest moment on-camera, he explains why his parents shared sticky rice with his friends, but never padeak.

As a child, Mr. Douangdara couldn’t understand it, but “after 20 years of being told that bucket of fish sauce was gross, embarrassment and shame became part of their lives.” That Ms. Luangrath named her restaurant after the ingredient — pushing it into the foreground, celebrating the real beauty and power of its glorious stink — wasn’t lost on Lao cooks who had hidden their padaek away, whether literally or figuratively.

Referring to his parents, Mr. Douangdara closes that video by saying, “I’m proud of Maeh’s artistry making unfiltered fish sauce; I boast about Poh’s skills in slaughtering a cow. Our food is spicy, pungent and most importantly, it is enough. We are enough.”

A traditional, family-style Lao meal revolves around sticky rice. Surrounding it, there might be jeow — a tasty relish of some kind — along with a soup, meat and vegetable for everyone to reach for communally.

But Lao cuisine is hard to compress. It’s extensive, regional and diverse, making deliciousness out of everything within reach — wild greens, flowers, tendrils and bitter herbs, a pile of soft white ant eggs, blood and offal of every kind, and even the tiny, pesky crabs that live in rice fields. Nothing is wasted.

Diners get these combination platters to go, walking back to their cars with fragrant, sweaty bags of Lao sausage, or they sit by the window, pinching pieces of sticky rice with their fingers, chewing on the glistening, elastic meat around cleaved short ribs, cut just like Korean galbi.

Tharathip Soulisak runs a tiny, roving pop up in Los Angeles that changes its name and menu with the seasons. He ferments his own padeak, and serves delicate little cubes of blood cake with handmade noodles. And he often plans menus around what he craves eating — if you’re lucky, it might be nam khao tod, the habit-forming, labor-intensive fried-rice dish, stained deep red with curry paste and speckled with bits of tart and bouncy cured pork.

Mr. Soulisak is currently planning to add a chewy grilled brisket to his menu, aware that some diners might expect the cut to be wobbly, steamy and tender. “Am I going to get complaints about it being chewy?” he said. “I don’t know, but chewy is a texture that Lao people love!”

When Mr. Soulisak’s parents fled Laos, they lived in the Nong Khai refugee camp in Thailand, and he often refers to his own cooking now as “Lao refugee food” — dishes removed from home, changing out of necessity, surviving through resilience.

California is home to more Lao immigrants than any other part of the country. While there is no centralized Lao neighborhood with temples, businesses and restaurants in Los Angeles or Orange County — no Little Laos — there are hubs for Lao food scattered through the area.

The sisters Manoy and Kayla Keungmanivong took over Vientiane, in Garden Grove, Calif., from their father, Saveng, more than a decade ago. They had previously worked in their father’s kitchen, turning out both Thai and Lao dishes (including a Lao papaya salad with whole salted crabs served on the side, if you know to ask for them).

The goi pa, a vibrant fish salad, is shimmering and opulent, scented with many kinds of mint, the meaty pieces almost invisible among a generous mass of makrut lime leaves and red onion. The laap (also Anglicized to “larb”) is a joy, and includes one made with beef and fuzzy, stretchy tripe, seasoned with bile if you’d like it, which pushes the flavors outward until they’re severely bitter and mouthwatering.

“There are a lot of foodies out there, and a lot of restaurants change things up for them, but not us,” Manoy Keungmanivong said. “We keep it traditional because our elders are used to those flavors.”

It would be a shame to leave Vientiane without stopping by the fridge, which is always stocked with slim, terrazzolike slabs of som moo, a preserved pork the sisters make in house, and tubs of deeply flavored dips and relishes, made from ingredients like mustard leaves, roasted chiles and grilled tomatoes.

You could pick just one of these dips up and make a luxurious meal of it at home, putting together a spread with some sticky rice, pork cracklings, lettuces, herbs and raw vegetables, or whatever you have around. Everything will be improved by a little tub of relish.

There’s nothing more thrilling than a prolific, generous home cook opening up her kitchen to you. In Mission Hills, Calif., Mannie Sithammavong went professional in 2018, when she took over a Chinese restaurant close to her husband’s auto-body shop.

Ms. Sithammavong called it Kop Jai Lai, serving mostly Thai food, but dedicated a section of the menu to the Lao dishes she’d cooked for family and friends at home: papaya salad, the slippery, aromatic steamed catfish dumpling mok pla, and a whole range of laap and noodle soups.

A neat menu makes things deliciously simple for diners, though many Lao dishes aren’t easily or rigidly categorized — they’re borderless, served in more than one style, belonging to many people across many places.

The khao poon pla, made with catfish, is particularly rich and comforting. And the khao piak, which murmurs softly in the international language of chicken-noodle soups, features a heap of housemade rice noodles.

Sold at her Orange County business Nok’s Kitchen, the Lao sausage was a hit, particularly with local Vietnamese and Thai restaurants. She took note, and in just a few months, Ms. Sayavong and her husband plan to open their own restaurant in Westminster — another small victory for the blossoming Lao food scene.