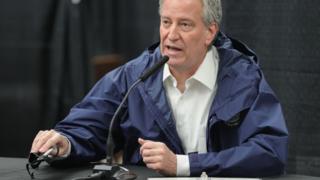 New York City Mayor Bill de Blasio has apologised after he criticised a large gathering of Jewish funeral mourners amid the coronavirus pandemic.

In response to reports of a mass gathering for a Jewish funeral, Mr de Blasio specifically warned “the Jewish community” not to assemble in future.

The city leader was accused of anti-Semitism for his comments.

The Hasidic Jews were mourning a late rabbi at the service in the Williamsburg, Brooklyn, neighbourhood.

“If in my passion and in my emotion I said something that was hurtful, I’m sorry about that,” Mr de Blasio said.

“I have no regrets about calling out this danger and saying we’re going to deal with it very, very aggressively.”

Tipster says this is the Williamsburg funeral today of Rabbi Chaim Mertz who died from COVID-19 pic.twitter.com/wsTvCrlzpb

“When I heard, I went there myself to ensure the crowd was dispersed,” he said. “What I saw will not be tolerated so long as we are fighting the coronavirus.”

But it was his subsequent tweet, in which he singled out “the Jewish community”, that drew ire.

My message to the Jewish community, and all communities, is this simple: the time for warnings has passed. I have instructed the NYPD to proceed immediately to summons or even arrest those who gather in large groups. This is about stopping this disease and saving lives. Period.

“The few who don’t social distance should be called out,” said Anti-Defamation League CEO Jonathan Greenblatt on Twitter.

“But generalizing against the whole population is outrageous especially when so many are scapegoating Jews.”

And the American Jewish Committee said: “The vast majority of the Jewish community is following the guidelines.

“You can find us donating blood, raising money to support our neighbours, and in emergency rooms providing critical care. We deserve better from our leaders than generalizations and finger-pointing.”

After apologising for his comments, Mr de Blasio said he “understood” that people were in pain, but there were consequences for those who attended.

“Some will be sick with that disease,” he said. “It’s just a fact, we know this.

“Some will spread the disease to others. People, as a result, will die.”

It is not known how many people attended the funeral.