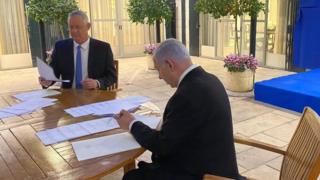 The deal will reportedly see the pair rotating the leadership of the country, with Mr Netanyahu going first as PM.

It brings political certainty to Israel after three inconclusive elections and a year of political paralysis.

Both men had faced calls to avoid a fourth election and form a coalition to help tackle the coronavirus pandemic.

The Israeli health ministry has reported 13,654 confirmed cases of Covid-19 and 173 associated deaths. Some 150 patients are in a serious condition in hospital.

Mr Netanyahu and Mr Gantz signed the agreement in the prime minister’s residence in Jerusalem on Monday night, as Israel remained in near-total lockdown.

Mr Netanyahu tweeted a picture of the Israeli flag and a statement from his Likud party saying the deal established a “national emergency government”.

“We have prevented a fourth election. We will protect democracy. We will fight coronavirus and care for all Israel’s citizens,” Mr Gantz tweeted.

The agreement is expected to see Mr Netanyahu remain as prime minister for 18 months, during which time his delayed trial on corruption charges is due to start. He has denied any wrongdoing.

Mr Gantz will reportedly start off as defence minister, before taking over as prime minister late next year.

The BBC’s Tom Bateman in Jerusalem says the agreement between the two men marks an end to one of the most turbulent periods in Israeli political history and amounts to a victory for Mr Netanyahu, who stays in office despite a criminal indictment and a country deeply divided over leadership.

Mr Gantz, our correspondent adds, has ditched half of the political alliance he built in challenging Mr Netanyahu – some of his former allies have accused him of a betrayal by joining his former adversary in government.