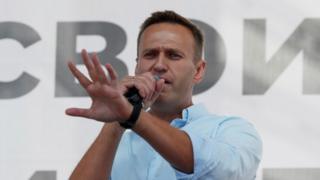 Kremlin critic Alexei Navalny, in a coma after being taken ill on a plane, is able to be transported by air, German doctors said after visiting him.

Russian doctors treating Mr Navalny in the Siberian city of Omsk had said he was too ill to be moved.

His supporters suspect he was poisoned, and accuse the authorities of trying to cover up a crime.

A medically equipped plane is waiting in Omsk to take him to Germany for treatment.

Doctors in Omsk say no poison was found in his body, but health officials have indicated that traces of an industrial chemical had been found on his skin and hair.

In a preliminary diagnosis on Friday, local doctors said his condition might be the result of a “metabolic disorder” caused by low blood sugar. They also said he was too unstable to be transported by air.

However, Mr Navalny’s team said it was “deadly” for him to remain in the hospital.

The prominent critic of President Vladimir Putin has consistently exposed official corruption in Russia. He has served multiple jail terms.

His team suspects a poisonous substance was put in his tea at an airport cafe in the city of Tomsk as he prepared to fly to Moscow.

Foreign leaders including Germany’s Angela Merkel and France’s Emmanuel Macron have expressed concern for Mr Navalny. In the US, Democratic presidential candidate Joe Biden has described the incident as “unacceptable” and vowed that, if elected, he would “stand up to autocrats like Putin”.

What is being said about Mr Navalny’s fitness to travel?

The Berlin-based Cinema for Peace Foundation organised an air ambulance to pick up Mr Navalny and bring him back to Berlin, where it said the Charite hospital was ready to treat him.

It said its doctors had judged Mr Navalny fit to travel and wanted to fly on Friday night or Saturday morning.

“They can fly him, we are willing,” it told the BBC. “The circumstances and equipment make it possible.”

At a news conference in Berlin, Mr Navalny’s aide Leonid Volkov said at first doctors at the hospital had been helping to facilitate his transfer but abruptly stopped doing so.

“[It was] like something was switched off – like medicine mode off, cover-up operation mode on – and the doctors refused to co-operate any more, refused to give any information even to Alexei’s wife,” he said.

The Cinema for Peace Foundation was founded by activist and filmmaker Jaka Bizilj. In 2018, it arranged for the treatment of Pyotr Verzilov – an activist with Russian protest group Pussy Riot – who had symptoms of poisoning.

Mr Navalny’s wife Yulia has written to President Putin asking him to allow her husband to be moved.

Mr Putin’s spokesman Dmitry Peskov said on Thursday that the Kremlin would help move Mr Navalny abroad if necessary and wished him a “speedy recovery”. On Friday, he said transporting him by air “may pose a threat to his health”.

Yulia Navalnaya said she thought the Russian authorities were stalling so that evidence of any chemical substance would be lost.

April 2017: He was taken to hospital after an antiseptic green dye was splashed on his face in Moscow. It was the second time he was targeted with zelyonka (“brilliant green” in English) that year. “It looks funny but it hurts like hell,” he tweeted following the attack.

July 2019: He was sentenced to 30 days in prison after calling for unauthorised protests. He fell ill in jail and doctors said he had suffered an acute allergic reaction, diagnosing him with “contact dermatitis”. His own doctor suggested he might have been exposed to “some toxic agent” and Mr Navalny said he thought he might have been poisoned.

December 2019: Russian security forces raided the offices of his Anti-Corruption Foundation, taking laptops and other equipment. CCTV footage showed officials using power tools to get through the door. Earlier that year, his organisation was declared a “foreign agent”.

How did he end up in hospital?

Mr Navalny fell ill during a flight from Tomsk to Moscow and his plane made an emergency landing in Omsk.

Video footage on social media showed Mr Navalny being taken on a stretcher to an ambulance on the airport runway.

Other disturbing video appeared to show a stricken Mr Navalny on the flight. Passenger Pavel Lebedev said he heard the activist “screaming in pain”.

Another photograph on social media purported to show Mr Navalny drinking from a cup at a Tomsk airport cafe.