The bloody crackdown was launched as demonstrators defied warnings from the regime and took to the streets in cities and towns across the country on its annual Armed Forces Day. Soldiers and police opened fire in 28 locations on the deadliest day since last month’s military coup. At least 89 deaths, including children, were recorded by the Assistance Association for Political Prisoners.

But an independent researcher in the country’s largest city,Yangon, put the toll higher, at around 100 civilians.

The slaughter provoked an international outcry, with Mr Raab saying: “The killing of unarmed civilians, including children, marks a new low.

He added: “We will work with our international partners to end this senseless violence, hold those responsible to account, and secure a path back to democracy.”

British ambassador to Myanmar Dan Chugg, who is based in Yangon, said: “The security forces have disgraced themselves by shooting unarmed civilians. At a time of economic crisis, Covid and a worsening humanitarian situation, today’s military parade and extrajudicial killings speak volumes for the priorities of the military junta.”

The latest deaths take the number killed in the suppression of protests since the February 1 coup to more than 400.

Protesters had gathered yesterday despite the military threatening to use deadly violence against them. 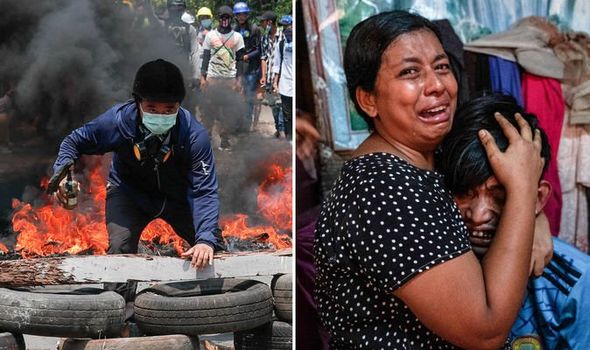 State TV had warned in a broadcast on Friday that protesters risked being shot “in the head and back”.

Protester Thu Ya Zaw, in the central town of Myingyan, reported yesterday: “They are killing us like birds or chickens, even in our homes. We will keep protesting regardless.”

Shots were fired at the US cultural centre in Yangon but there were no injuries.

In his TV address, coup leader Min Aung Hlaing – who seized power after a landslide election backed Aung San Suu Kyi’s democratic party – claimed he would hold elections at some point in the future.

He added: “Violent acts that affect security in order to make demands are inappropriate.”