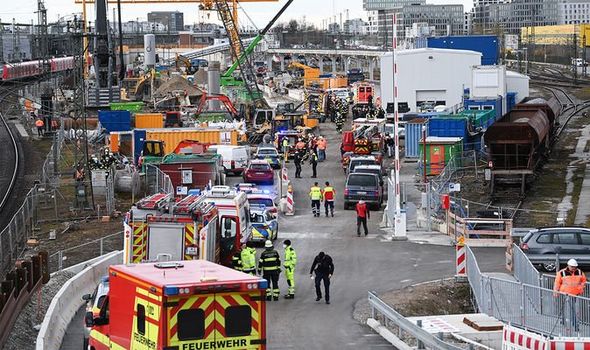 A 550lb World War Two bomb exploded during construction works near Donnersbergerbruecke station on Wednesday, December 1. One of the victims affected by the blast is said to be in a serious condition, according to fire chief Wolfgang Schäuble.

Following the blast, train services to and from the station have been suspended, and some commuter trains had also been evacuated.

According to reports, the boom from the explosion was heard several miles away.

Emergency services include firefighters and police are at the construction site, following the explosion.

A police helicopter was also reported to be circulating overhead.

A fire department spokesman on site said: “We are in the process of looking after the people.”

Police said there is no wider danger to the public, and have cordoned off the area.

A statement released by Munich police on Twitter reads: “An operation is currently underway in the area of the Donnersbergerbrücke at a construction site.

“Please avoid this area. Our colleagues are already on site.”

According to the police, there was a loud bang near the Donnersbergerbrücke, then a column of smoke formed.

The explosion occurred at 12.15 pm, and according to the police, the cause of the blast was an aerial bomb from the Second World War.

It is understood that the bomb had been hit during drilling, amid construction work at the site.

Why the bomb was not discovered in advance of the work being undertaken is still unclear.

Normally, during construction work in downtown Munich, rigorous checks are carried out to check for potential unexploded bombs.

Donnersbergerbruecke is on the main route of the Munich S-Bahn, one of the largest networks of the German S-Bahn service.

The construction site forms part of Munich’s Second Mainline project to build another line through the city centre.

Interior Minister Joachim Herrmann visited the scene of the accident, to get an idea of the situation and the 65-year-old wished the injured a speedy recovery.