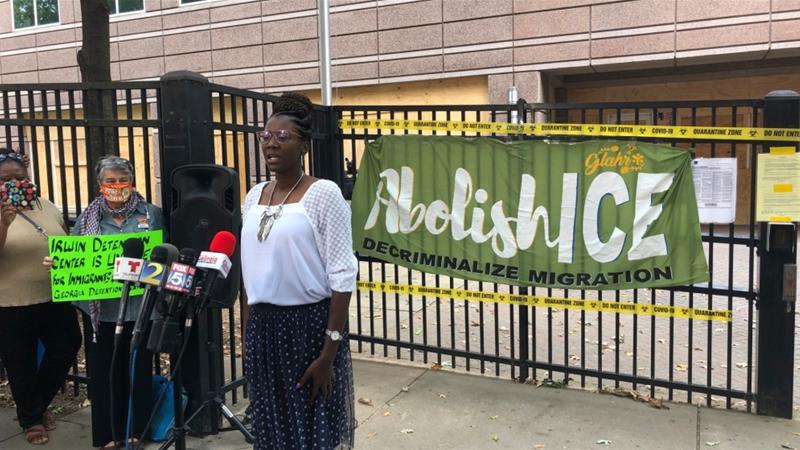 Sitting across from her lawyer at an immigration detention centre in rural Georgia, Mileidy Cardentey Fernandez unbuttoned her jail jumpsuit to show the scars on her abdomen. There were three small, circular marks.

The 39-year-old woman from Cuba was told only that she would undergo an operation to treat her ovarian cysts, but a month later, she is still not sure what procedure she actually got.

After Fernandez repeatedly requested to see her medical records, Irwin County Detention Center gave her more than 100 pages showing a diagnosis of cysts but nothing from the day of the surgery.

“The only thing they told me was: ‘You’re going to go to sleep and when you wake up, we will have finished’,” Fernandez said this week in a phone interview with The Associated Press news agency.

She kept her hospital bracelet. It has the date, August 14, and part of the doctor’s name, Dr Mahendra Amin, a gynaecologist linked this week to allegations of unwanted hysterectomies and other procedures done on detained immigrant women that jeopardise their ability to have children.

An AP news agency review of medical records of four women and interviews with lawyers revealed growing allegations that Amin performed surgeries and other procedures on detained immigrants that they never sought or did not fully understand.

LaSalle Corrections, which operates the jail, said in a statement it “strongly refutes these allegations and any implications of misconduct”.

Women housed at Irwin County Detention Center who needed a gynaecologist were typically taken to Amin, according to medical records provided to the AP news agency by Free and lawyer Alexis Ruiz, who represents Fernandez.

Interviews with detainees and their lawyers suggest some women came to fear the doctor.

Records reviewed by the AP news agency show one woman was given a psychiatric evaluation the same day she refused to undergo a surgical procedure known as dilation and curettage. Commonly known as a D&C, it removes tissue from the uterus and can be used as a treatment for excessive bleeding.

A note written on letterhead from Amin’s office said the woman was concerned. According to a written summary of her psychiatric evaluation, the woman said: “I am nervous about my upcoming procedure.”

The summary says she denied needing mental healthcare and added: “I am worried because I saw someone else after they had surgery and what I saw scared me.”

The AP news agency also reviewed records for a woman who was given a hysterectomy. She reported irregular bleeding and was taken to see Amin for a D&C. A lab study of the tissue found signs of early cancer, called a carcinoma. Amin’s notes indicate the woman agreed 11 days later to the hysterectomy.

While women can potentially still conceive with one intact tube and ovary, doctors who spoke to the AP news agency said removal of the tube was likely unnecessary and should never have happened without Binam’s consent.

The doctors also questioned how Amin discovered the swollen tube because performing a D&C would not normally involve exploring a woman’s fallopian tubes.

“It’s established US law that you don’t operate on everything that you find,” she said. “If you’re in a teaching hospital and an attending physician does something like that, it’s a scandal and they are fired.”

Binam was on the verge of deportation on Wednesday, but ICE delayed it after calls from members of Congress and a request for an emergency stay by her lawyer.