The Met Office has issued a yellow snow warning for parts of the UK as the weather agency warns residents to watch out for travel delays and power cuts. The yellow warning is in place from 3am on Saturday, January 16, until 9pm on Saturday. A number of areas in Scotland will be affected, including Central, Tayside and Fife. The Met Office writes: “An area of rain pushing eastwards is expected to turn snow in places as it encounters colder air across Scotland and parts of northern and Eastern England.

“At first the main hazard may be rain falling onto frozen surfaces leading to ice, especially on higher level routes.

“However snow becomes more likely during the earlier morning.

“Heavier snow is more likely above 200m in Scotland and northern England, where five to 10cm of snow may accumulate, possibly 20cm on highest routes.

“At lower levels and further south, two to five cm of snow may accumulate in places, but the situation is finely balanced, with the possibility that most lower-lying areas, especially in the east, will see rain or sleet rather than snow.” 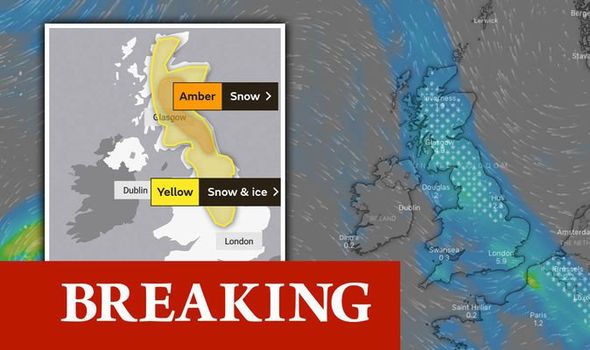 In England, the affected areas are expected to be:

The rest of England will see heavy rainfall, particularly in London and the South East, who aren’t expected to see any snow.

Wales and Northern Ireland are forecasted to stay pretty dry over the coming days.

Met Office forecaster Matthew Box said: “The snow will continue throughout the day. It will Peter out in places as it moves south.

“By the afternoon, we will see sleet and snow across the Midlands, parts of Wales and even further south.”